The conviction under Germany's War Weapons Control Act was handed down in Kiel, a city in the northern state of Schleswig-Holstein, and regards an investigation from 2015.

As we reported at the time, a search for stolen Nazi art at the elderly man's home actually turned up multiple items of military hardware in his underground garage.

Among the arsenal were the Panther tank, a torpedo, mortars, anti-aircraft guns, machine guns, automatic pistols, and 1,500 rounds of ammunition. 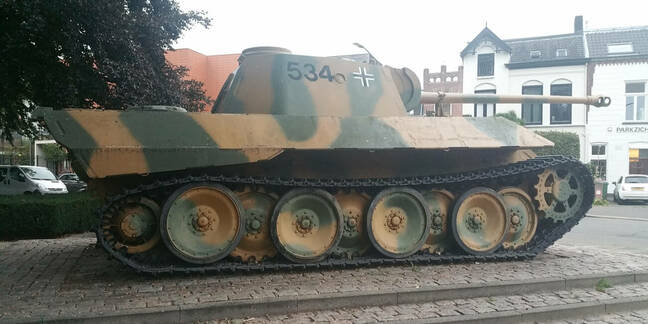 Example of a restored Panther tank in Breda, the Netherlands
(Maurizio Fabbroni / Shutterstock.com)

The defendant, who was not named due to German privacy laws, also received a suspended prison sentence of 14 months and was ordered to sell or donate the tank and flak cannon to a museum or collector within two years, as reported by AP News.

Though its guns were not operational, the tank could be driven – a fact the pensioner made no effort to hide. The mayor of the nearby Keikendorf municipality reported: "He was chugging around in that thing during the snow catastrophe in 1978."

According to the English-language DW News, though most German tanks were destroyed during the war, survivors were taken by the Allies to be probed for strengths and weaknesses.

An example was found in Surrey, England, in 1977 and the German war memorabilia collector had it shipped home, where it was restored at a cost of 500,000 marks.

It took the German military 20 men and nine hours to remove the tank and arsenal from the garage. The Panther was hitched to an armoured recovery vehicle and hauled out to be loaded onto a trailer.

Punishments under the War Weapons Control Act depend on the armaments' functionality. The defence argued that although the confiscated items were officially classified as weapons of war, this was not enough to prove that the defendant had broken the law.

The judge, however, pointed to expert testimony that the tank's gun, though corroded with rust, could be cleaned and restored to working condition within a matter of days.

The man's lawyer told the court he is not a Nazi sympathiser, and that the tank's restoration had been his "life's work." ®

European nations battle to bag some of Intel's billions

New chip-stuff factories are like buses: You wafer ages then two come along at once

Maker of ATM bombing tutorials blew himself up – Euro cops