Q: Post-lockdown, where would I like to go? A: As far away from my own head as possible

Something for the Weekend, Sir? More good news for Team GB's Tokyo Games medal winners: you're going to the Moon.

This is true because I read it. It was in a press release sent to me this week. "Olympic Medalists Get Free Ticket to the Moon," it says. That is going to be one expensive flight, with more than 50 medals awarded to Brits so far, and the Paralympics yet to begin.

Unless… yep, here it comes in the first sentence. "LifeShip Inc. today announced they will be sending Olympic and Paralympic gold, silver, and bronze medalists' DNA to the Moon for free."

Doug Quail probably earned more space miles out of his trip down the road to Rekal than gong conquerors are going to get from their meta visit to Earth's largest satellite. I myself might only be 29,096th on the waiting list to be assigned a seat – you may remember that I still have my mum's ticket issued by PanAm – but at least when my turn comes, it'll be all of me that heads up and out. I'll be buggered if I'm going to be left standing on a viewing platform, waving a tearful farewell as my toenail clippings take the trip in my place.

Genomics company LifeShip hopes to cram a million astronauts into a capsule this way, at $99 a pop. I do hope the capsule has landing permission, given that some other company was selling lunar surface real estate by the square foot back in the 1990s.

And yet… LifeShip's quoted $399 price for sending "a loved one's ashes" in the capsule sounds interesting. It just comes a bit too late. My mum might have been able to make that Moon flight after all if only I hadn't distributed her ashes in woodland already.

Come to think of it, $399 sounds like a bargain, given that "a loved one's ashes" takes up considerably more space and weight than Sky Brown's DNA. Indeed, they are delivered to the bereaved in a large plastic container of a similar size and weight to a 2kg tub of muscle-gain protein. I made the spontaneous decision to take my mum's ashes to the woods one afternoon after leaving my local gym with a chalky taste in my mouth.

Thankfully LifeShip isn't Ryanair otherwise they'd charge extra so that well-heeled DNA samples could enjoy Speedy Boarding. Tea and coffee would cost $10 per stick. Or I'd find that the spacesuit isn't included as standard.

At least I have my own Levis.

Aimless offworld thoughts such as these are a hangover from pandemic lockdowns. In normal times, people would have laughed at the concept of spending "real" money on virtual artwork locked into NFTs. Art collectors boasting about their latest NFT acquisition would have been regarded as floundering at the same evolutionary level as a sweaty lard-arse down the pub who tells you they'd just got married to a "hot babe" on Second Life.

Not today, of course. This week I learnt that luxury processed foods guru Elizabeth Solaru made history by being the first to market with an NFT cake.

Yup, a cake. Not just any old cake, silly! It's an NFT cake – you know, like a real cake but one that you can't eat because it doesn't exist.

This is perfectly logical. It combines two of the western world's most ludicrous airhead fashions: NFTs themselves, of course, and the inexplicable notion that baking cakes might be considered thrilling. Or difficult. Or worth watching on TV.

Baking cakes is easy. This is true because I read it. There's a book Mme D bought in the 1980s that explains how easy it is. "Cakes can be made quickly and easily with the minimum of fuss and trouble," writes the author, pointedly noting that fancy tins and piping bags are not required. "There is no great mystery in cooking a cake," she adds. "It is done when it looks and smells ready."

Well, I have baked every recipe in the book over the years and she's right: baking is a piece of piss. How they can make a long-running reality TV competition out of it, I have no idea. The programme advisers must be as mental as the viewers – ripe pickings for a second-hand NFT salesman, if you ask me.

Here's the much dog-eared book in question. Note the author. 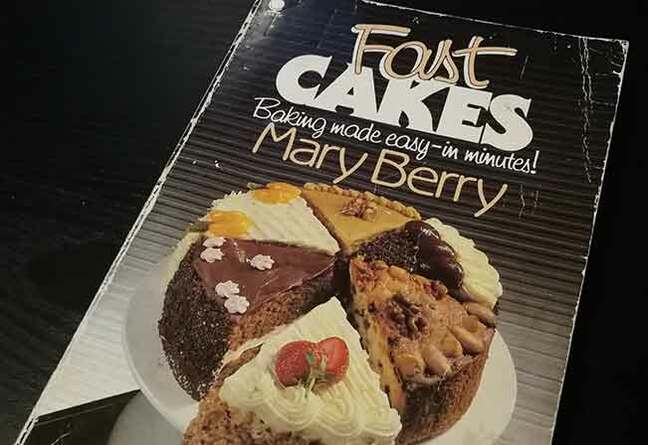 Further post-lockdown airheadedness in recent months has seen a growth in the popularity of stress-busting books and well-being/meditation apps.

Now, I have to be careful here because last year's televangelists and app developers churning out loop kitsch recordings of birdsong and cod yoga ambient life muzak have rebranded themselves as "mental health thought-leaders". Cast the slightest doubt on any of their wild claims and you risk being accused of wanting to drive all bipolar sufferers into death camps. I've been down this route already when I recently likened Marcus Rashford's embarrassingly awful penalty attempt at the Euros final to watching Monsieur Hulot performing Riverdance after mainlining Dulcolax.

First up is "minister and licensed psychotherapist" Dr Pieter Noomen who has written a dozen booklets based on some nouns that popped into his head while going for evening walks. He doesn't claim to have written the books himself, though. "I 'heard' them within me when I specifically sat down to 'hear' them," he explains on his website. "I listened while they formed in my head."

Yes, Pieter, they're called "thoughts". Now that you've cleared all such things from your head, there's a TV show about baking cakes you might be interested in.

On the tech side, I'm intrigued by the concept of "bio active listening" from app developer Bio Music One. BMO has invented an "active-audio technology integrated to an original musical medium" based on "bio active sonic vibrations".

So, in other words… music.

No, not just music! Sonic vibrations! You can even experience it via several methods. One is Conscious Listening Mode (that is, listening to the music). Another is Continuous Mode (leave it playing on repeat). The third is my personal favourite: Inaudible Mode. This last one involves "playback at the lowest level of volume to diffuse the bio active sonic vibrations without hearing the music."

I find this intriguing because it is evocative of the tinfoil hat brigade who insist their brains are being manipulated by radio waves. Well, maybe they are. The CIA has started seriously investigating so-called Havana Syndrome, so they must think it's possible. There was a physicist called Dr Elizabeth Rauscher who worked at the Stanford Research Institute and NASA, among other places, whose research into bioelectromagnetics from the 1960s onwards led her to claim she had discovered a frequency modulation that made people laugh uncontrollably.

She called it the "marijuana frequency".

Unfortunately, she died in 2019 at the age of 82 and her notebooks have yet to be published. One can only dream of what might have been if she'd lived a couple more years and had access to some app developers. We'd all be going back to the office stoned on sonic vibrations.

Talking of which, you can try out BMO's "bio active listening" for yourself on this page, targeted at stressed-out journalists like, er, me. The bio active sonic vibrations are especially effective in Inaudible Mode.

Alistair Dabbs is a freelance technology tart, juggling tech journalism, training and digital publishing. Always one to spot new trends before they go mainstream, I am baffled to acknowledge that "bluetooth audio sunglasses" are now a genuine thing and not at all the farcical fad I thought it was a few weeks ago. More at Autosave is for Wimps and @alidabbs.