THX Onyx: A do-it-all DAC for the travelling audiophile

Hi-res, MQA, DSD, supports Apple Music's highest quality – but is it worth the hassle?

Review Apple introduced hi-res lossless audio to its music service last month, but third-party hardware is required to enjoy it – if indeed the difference is audible. We took a look at the THX Onyx, a portable DAC and headphone amplifier that claims to be just the thing.

There is a strange cocktail of ingredients that flavours the music and audio industry. There is a drive towards greater convenience, which means streaming music and true wireless, as popularised by Apple's Bluetooth-driven AirPods, first introduced in September 2016. Then there is a push towards higher quality, with vendors touting higher resolution such as 24-bit 192kHz digital, or exotic formats such as DSD (Direct Stream Digital), MQA (Master Quality Authenticated) – all of which are supported by the THX Onyx – and Dolby Atmos/Spatial audio, which is a new approach to surround sound.

These two demands sometimes pull in opposite directions. Streaming audio has largely meant lossy compression, formats such as MP3 and AAC (Advanced Audio Coding), which reduce data size by omitting parts of the signal that are inaudible or hardly audible. Wireless has largely meant Bluetooth audio, for which none of the available codecs are lossless. Lossy compression at levels like Apple's 256 Kbps AAC is excellent and not an issue for most people yet there remains the nagging annoyance that it is potentially compromising quality for the sake of convenience and efficiency.

This is the compromise that Apple's lossless offer solves, but there are some un-Apple characteristics to the new service. One odd thing is that Apple itself says that "the difference between AAC and lossless audio is virtually indistinguishable." Listeners also need a wired connection to headphones or speakers, thanks to the Bluetooth limitation mentioned above. Third, when using an iPhone or iPad "to listen to songs at sample rates higher than 48kHz, you need an external third-party digital-to-analog converter," or DAC – because the Apple Lightning headphone adapter (which contains a DAC) maxes out at 24-bit, 48kHz. 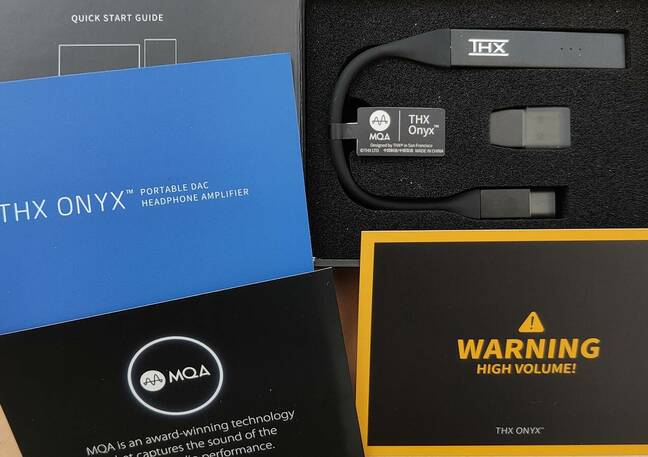 THX Onyx ... The box warns of inadvertent high volume when setting up

Something, in fact, like the THX Onyx. This is a USB-powered DAC designed for use on the go. What you get is a DAC and headphone amplifier in a slim metal case, about 60mm long, with a 3.5mm jack socket at one end, three LEDs, and a short cable at the other terminated by a USB-C connector. A magnet on the case keeps the cable tidy when not in use. In the box is a USB-C to USB-A adapter, while for iPhone a slim Lightning to USB Camera Adapter is needed – not the wide USB 3 one, which will not work because it does not supply enough power. Another annoyance is that headsets with mics will not work for calls on an iPhone, though conferencing apps like Zoom do work. On a desktop PC or Mac, or Android with USB, everything works fine, and a recent iPad with USB-C works fine too.

Plugging THX Onyx into an iPad and using trusty Sennheiser HD600 headphones was quite a revelation, same with a Sony NW-A105 Walkman, even though the Sony has a high quality DAC of its own. Most of our testing was with Apple Music lossless or with a variety of lossless and high-res files on the Sony or on a PC including DSD and MQA. Notable versus the official Apple headphone adapter or most cheap adapters (the Apple one only costs pennies after all) is that the bass sounds deeper and richer, the sound opens out and small details are more apparent. The other big deal is that it goes loud – louder than anyone would want on normal music.

The secret here is not so much the format flexibility as the built-in amplifier, called THX AAA-78, where AAA stands for Achromatic Audio Amplifier, and is specified for headphones with impedance from 22-1,000 ohms. The HD600 has an impedance of 300 ohms which is too high for most lightning or USB-C headphone adapters. But how many want to take HD600s out and about anyway? Next we tried Shure's wired IE300 earbuds, which have just 16 ohms impedance. The gross differences between the cheap adapter and the Onyx disappeared. We thought it still sounded better, with the same kind of difference: deeper, more defined bass, more detail, more open. It would also still go much louder for those who do not value their hearing.

Now, about those formats. The Onyx has three LEDs though they are always all the same colour, so one would have done. Blue means it is playing. Yellow means hi-res PCM, defined as greater than 48kHz sampling rate. Red means DSD. Mauve means MQA. These LEDs are informative, but also likely to induce FOMO – fear of missing out – if you are seeing "only" blue LEDs. Does it matter?

When it comes to high-res PCM, according to the docs, the THX Onyx supports up to 32-bit 384 kHz input, and further, "all PCM, MQA up-sampled to 705.6/768 kHz". Audiophiles love to debate the merits of high-res but the evidence for its audible superiority for most music is slim.

This should not come as a surprise. Put crudely, the sample rate determines the highest reproducible frequency, which is half the sample rate, and humble 16-bit, 44.1kHz (CD quality) can reproduce up to 22kHz, which is beyond what most people can hear, while the bit depth determines the dynamic range, with 16-bit allowing for up to 96dB, which is far more than most recorded music requires. Dr Mark Waldrep, whose company AIX Records sells high-resolution audio discs and downloads, performed a perceptual discrimination survey discovering that "high-resolution audio was undetectable by a substantial majority of the respondents regardless of experience level, equipment cost, or process" though "some evidence exists that specific genres and recordings produced moderately higher positives." 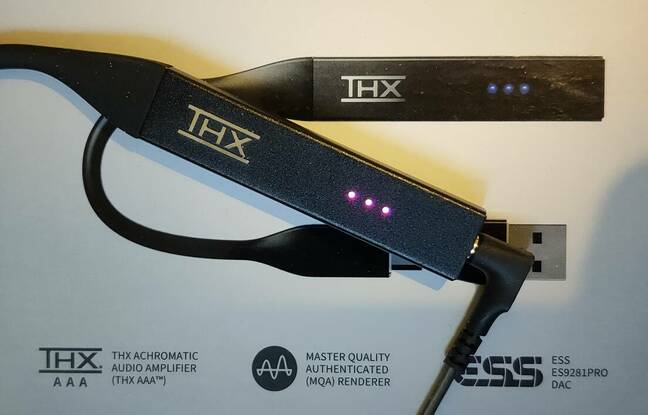 THX Onyx DAC lit up for MQA, but whether MQA is desirable is doubtful

Still, the thought that high-resolution audio will do no harm and might occasionally sound better is hard to shake off – there are some slight benefits from things like easier implementation of filtering – and the Onyx will scratch that itch. On an iPad, enabling High-Resolution Lossless lights up the yellow LEDs, as well as causing occasional break-up of the sound caused by the large amount of data transferred. Unlikely to be worth it.

What about DSD? For this we turned to our little Sony, since Sony is the primary inventor of the format, co-developed with Philips, and we have a bunch of DSD files on there. They sounded superb, but the red LEDs stubbornly refused to illuminate. It was a matter of changing the setting from DSD-Raw to DoP (DSD over PCM). Then along came the red LEDs. Did it sound better? We could rhapsodise about the sound being more etched, more spacious, the vocals more natural, the transient sounds on the strings on our live recording from the California Audio Show 2014 sounding that bit more vivid and realistic.

Bullshit? Quite possibly, especially as switching between them fractionally increased the volume when in DoP mode. Still, if you have DSD files you may as well hear them with a DSD DAC just in case, and there is no doubting the high quality of DSD releases from the likes of Blue Coast Music, though from performers you have likely never heard of.

Meridian's MQA is more controversial. A lossless digital audio file includes data that most people cannot hear – that is why lossy formats also sound good. MQA uses space in the file that would be occupied by sounds below the noise floor to add data that increases the frequency response, as explained here.

MQA adds some secret sauce, a claimed "deblurring" of existing digital recordings, and authentication that mean an MQA DAC can detect and show when a digital signal has not been tampered with. MQA is closed source and proprietary, though, making external tests of what it does hard. Another snag is that those playing MQA-encoded files without an MQA decoder do not get the best quality. Third, it's been claimed that the MQA processing actually makes the sound less accurate; see Waldrep's piece here and the video he links for some research on the subject.

We likely do not need MQA then, but in playing back MQA it is nevertheless better to decode it, than to play it undecoded. Doing so requires more than just this DAC. MQA-encoded files playing on our Sony, which runs Android, did not light the mauve LEDs on the Onyx. The reason is that the Onyx is a hardware MQA renderer (thanks to the ES9281PRO DAC which supports this) but still requires a decoded digital signal, which needs software on the source device. An Android app called USB Audio Player will do this, for a small cost, or those with Tidal subscriptions can use the Tidal app on iOS, Android, PC or Mac.

We were able to get MQA working on a PC using an application called Audirvana and sample tracks supplied by Meridian. They sound good, but there's no evidence that they sound better than other hi-res formats, even though in the booklet that comes with the Onyx MQA is hyped as "best quality."

Dolby Atmos is more interesting. In its headphone variant this processes a surround mix to give positional effects even with just two channels. The Onyx does not specifically support Atmos, but on iOS 14.5 and higher there is a setting in Music for "Always On" which means the Atmos mix plays where available. This works on any headphones (wired or wireless) and is vastly more convenient than setting up a 9.2 speaker system and sitting in the sweet spot, even if the results are not quite as spectacular.

Results vary according to the quality of the mix but often sound great through the Onyx and IE300s, for example, and quite different from the stereo version. Since Dolby Atmos requires a new mix, the Atmos version might or might not sound better than the stereo in any individual case, but it seems a promising technology. Note that Apple's spatial audio with dynamic head tracking does require special Apple sauce, but Atmos itself is the bigger deal. 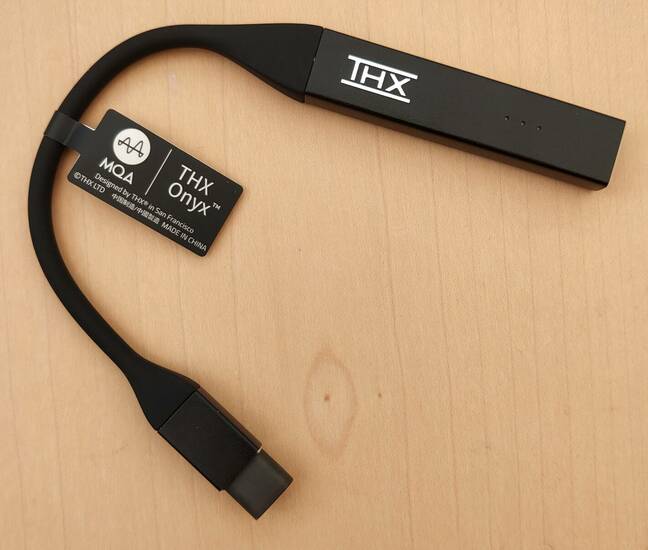 THX Onyx is a dangling USB DAC and headphone amplifier

Is it worth a tangle of wires, a dongle and a shorter battery life in order to get better sound when on the move? For many the answer will be no. True wireless is the future with both quality and battery life improving. The value of high-res and exotic formats is mostly hype, and Dolby Atmos, which has real benefit, works wirelessly. That said, going back to wireless after using the Onyx and decent wired headphones or earbuds is hard; it really does sound better, thanks mainly to its high-power amplifier and immaculate specifications. Combine that with exceptional format versatility and the high quality of the headphone amplifier and it's a nice gadget for those who can tolerate the inconvenience.

THX costs $199.99 or £199 in the UK, and is available from resellers including gaming specialist Razer. ®