Focus on ease of use, and company founder notes extended hardware life and freedom from vendor lock-in

Interview Zorin Pro 16 is out now*, along with a free Lite edition, complete with an optional "Windows 11" desktop theme.

Zorin OS is one of a few commercial Linux distributions which aim to be user-friendly alternatives to Windows and Mac. The OS is open source and pricing is based on a freemium model, with free Core, Lite and Education editions, and a paid for Pro edition (formerly called Ultimate).

Aware that users can install what they like even on the free editions, Zorin has a "why pay" article that pitches the payment as a means of supporting the project. The new Pro edition will cost the same as Ultimate, £39 plus VAT, and will be available from 17 August.

Zorin 16 is based on Ubuntu 20.04, the reason being that the company prefers to stick with the LTS (Long-term support) releases. "The reason behind basing on the LTS versions is that we're trying to make an operating system that is simple to manage, set and forget, and also really stable. That trumps all of the other more bleeding edge features that you find in these more short-lived Ubuntu releases," Zorin CEO and co-founder Artyom Zorin told The Reg. 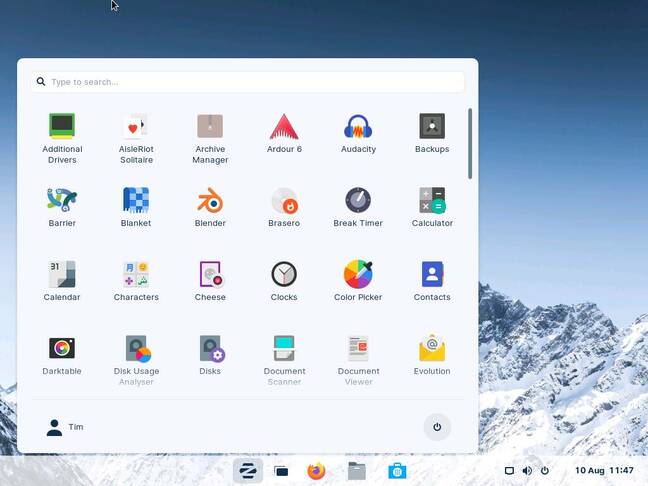 Zorin OS does its best to imitate Windows 11

What is actually new in Zorin 16? In the publicity, Zorin points to its premium desktop layouts, including the new Windows 11-ish flavour, as well as new and updated applications out of the box. We installed the release candidate and found applications including Blender, FreeCAD, GIMP and Inkscape for graphics, Evolution for email, LibreOffice for productivity, and Ardour, Audacity, OBS Studio, VLC and HandBrake for multimedia.

Zorin also points to Xournal++ for notes and Barrier for multi-device support, Barrier being an application that allows mouse, keyboard, and clipboard sharing between different devices and operating systems.

What is really new, though, given that users of Zorin 15 could also install these free and open-source applications? "We've had a lot of quality of life improvements across the system," said the co-founder. "It works a lot faster than Zorin OS 15, there are touchpad gestures that weren't available before, as standard. There are also smaller improvements across the system, a more refined desktop look and theme." There are also some backports to Ubuntu 20.04, like GNOME Shell 3.38, "which has lots of performance improvements, security improvements," he added. 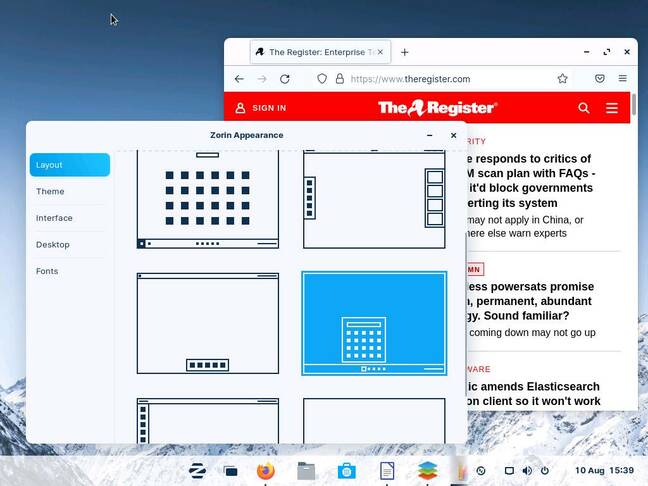 Choosing a layout is simple using the Appearance app

It seems a similar philosophy to Linux Mint, also based on Ubuntu LTS editions. What is the key difference? "Mint is more aimed towards enthusiast users," says Zorin. "In our case we're trying to focus on not just enthusiasts, but also new users, less technically inclined users, and making it a cohesive, well-designed experience that will be easier to use."

Another example of the system trying to be helpful is that while LibreOffice is pre-installed, there is also a plug for OnlyOffice, another open-source product which unlike LibreOffice is based on Microsoft's XML document formats – perhaps an admission of defeat in the document format wars, but which can be better for compatibility.

What is the pitch to business customers? Is it just a matter of saving on licence fees? "That's only a small part of what makes Linux appealing," said Zorin. "We've spoken to a lot of businesses and they also find the vendor lock-in into the Microsoft or Apple ecosystem quite concerning. And governments, especially in Europe, prefer to work with a local European vendor. The lifespan of their computers is also a lot longer. We have the Lite edition which is designed to work on computers 15 years old. "The city of Vicenza in Italy predicted to extend the life of their computers by between 30 to 40 per cent. The open-source nature of Linux is also very appealing."

Zorin (the company) is small. Based in Ireland, "it was started by my brother Kyrill and I originally as a science project in school. It developed more as the community grew, into a business," Zorin told us. "The full-time team is my brother and I, and we also hire people on an ad-hoc basis. We are looking to expand the company's full-time staff over the next year."

Zorin said last year that version 15 was downloaded over 1.7 million times proving at least that this small company has attracted plenty of interest, though with most of those downloads being tr-youts or free users it does not necessarily translate into a strong business.

There is something else coming, though – Zorin Grid, a system for managing a fleet of desktops centrally, which, Zorin told us, is "a space that's really lacking on Linux." Was not Grid meant to be here by now?

"There were some delays. We announced Zorin Grid back in January 2020 and the world has changed a lot since then, and we decided that in order to make it easy to manage for remote-first organizations there were some parts that would need to be re-architected," he said. "We're looking to launch in the first quarter of 2022." ®

* At the time of publication, it was a week before release. We have since updated the intro to reflect current events.