The web was done right the first time. An ancient 3D banana shows Microsoft does a lot right, too

Column In preparation for a big SIGGRAPH talk about all of the ways augmented reality will convert us into data-gathering drones for Mark Zuckerberg – if we're not careful – I scoured through some old archives.

I was looking for any memorabilia from my first trip to SIGGRAPH, that well-established conference on computer graphics, in 1993. At that show, I sat down at a lonely Silicon Graphics workstation running a hypertext app. Having already written a Macintosh hypertext system (no, not Hypercard), I knew what to expect. So I clicked around a bit, following text-based "links" with the mouse. Yep, it's a hypertext system, I thought. But there's not a lot here, is there?

I'd just had my first experience on the World Wide Web.

Thirty years old this month, the web has been a fixture for so long that not many people remember a time when it didn't encompass everything. But for the first few years, the web barely held anything at all, except for a promise: that everything could be connected through it.

Realising that promise required two conditions: freedom and stability. Free as in speech, and free as in beer. The code to the World Wide Web propagated widely, allowing a thousand flowers to bloom as systems as varied as IBM System/390s and 68000-based Macintoshes exchanged information as peers. Stable as in ancient rock – you can still open up a text-mode session to a web server and ask it to send you any file it has. The simplicity and clarity of Sir Tim Berners-Lee's implementation of HTTP means you don't even need a browser to talk to a web server.

That has never changed. Today we tend to prefer highly secure TLS connections to our servers, rather than sending everything in plain text. But there are times when plain text is exactly the right choice, when simplicity and clarity matter, and at those times we learn the web has never had to deviate from its essential principles. It was done right from the start and changed the world.

It also changed the trajectory of my career. A few months after that first encounter, I had my own web server up and running, and with my pal Tony Parisi worked out a way to be able to share and view 3D content over the web – arguably the first attempt to create a viable "Metaverse". Our own 3D browser – "Labyrinth" – used TimBL's libwww to retrieve 3D "worlds" from web servers. Linking in Tim's code gave us access to every server on the web. Hello, metaverse!

So imagine my surprise when I dug around in a quarter-century-old archive to find a .zip file containing something that purported to be the original executable of Labyrinth. Surely such an ancient piece of code – written for Windows 3.1 – wouldn't launch?

Well, after a bit of fiddling with the Windows compatibility settings, I was shocked – and extremely pleased – to see that, yes, it most certainly did. Download the software here and try for yourself! 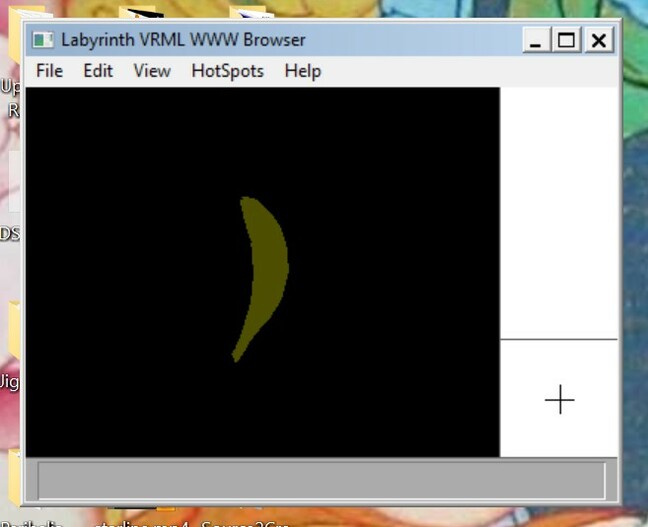 Even better, the app loaded the ur-content of the 3D web, the Cyberbanana. I was stunned by that. While you do hear stories about firms running some venerable, perhaps even hoary piece of Windows 3.1 software that does the one thing they need – so they've never seen the need to upgrade – I had never been the beneficiary of such an obsessive corporate focus on backward compatibility.

Microsoft got a lot of well-deserved dings in the 1990s for being the 900-pound monopolist of computing. We didn't – and couldn't – see the costs borne by a monopolist: you have to give users no reason to migrate away from your platform. Windows 10 has been riddled through-and-through with exceptions and backwards-compatibility hacks inherited from every previous edition – all the way back to Windows 95 – precisely so that an application that was obsolete a quarter of a century ago can still run.

Unlike the web, Windows has never been either free or open – but it offers a laudable stability. Too often in tech we bin something just because a newer and shinier thing has caught our eyes – the latest CPU, application or operating system. Thirty years on the cutting edge has left the industry with quite a scar: all the things that once worked well, but got left behind in a mad scramble to the latest and greatest. ®