Samsung's foldables fall to more realistic prices and harden up

Plus: How the S Pen will work outside the Note – by slipping into a case

Samsung has revealed a new pair of foldable smartphones at prices that are no longer outrageous to city traders, but still up there, at $1,799 and $999 respectively.

The new Galaxy Z Fold 3 and Galaxy Z Flip 3 don't diverge far from Samsung's foldable template. The former is a clamshell with a screen on the front and a larger single foldable display spanning its inner leaves. The Flip is a square little unit with a small screen on its exterior which folds open to offer a single display and a form factor that's about the size of a conventional smartphone but a little chunkier.

Samsung has charged a premium price for the Fold and Flip and positioned them as not just smartphones but fashion statements despite the lack of features like waterproofing. The Fold was first released in 2019, and devices handed to the media for review in April that year famously suffered display issues, with screens malfunctioning and in some cases just going blank altogether. The May release date was then shelved, but by July Samsung had redesigned the Fold's bendy screen.

This time around, Samsung has made the device more rugged and reduced the prices.

UK and EU pricing were not available at the time of publication, but El Reg suspects the prices will be higher than the conversion rates, as we saw with previous releases.

The newer Fold and Flip are still therefore priced at a premium, but have tougher glass, a new "armour aluminium" shell, and have an IPX8 rating meaning they can survive immersion in 1.5 metres of fresh water for up to 30 minutes. The latter means the foldables have caught up with the Galaxy S and Galaxy Note ranges, perhaps making the premium for a foldable easier to justify.

The new handsets have 5G radios and pack a 5nm process eight-core CPU. Samsung mentioned the Qualcomm Snapdragon 888 5G SoC in some material seen by The Register, but other documents don't name the CPU. 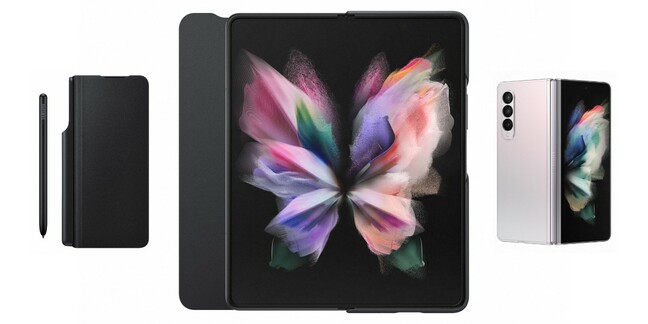 Three 12MP cameras are found at the rear, the cover has a 10MP selfie-shooter, and a 4MP camera lurks invisibly beneath the main display.

A 4,400mAh battery gets the job of keeping it all ticking over. 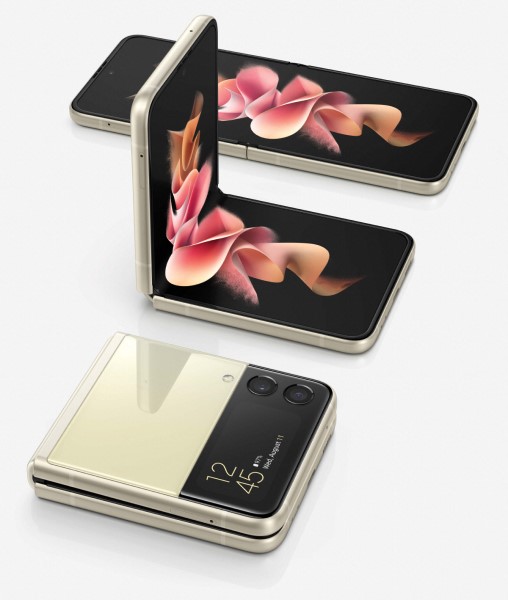 Both devices have fingerprint readers, NFC, are ready for Samsung Pay, can recognise your face as an authentication mechanism, and run Android 11.

Samsung has tweaked Google's OS to improve windowing on the Fold. A demo witnessed by The Register showed off side-by-side windows and the ability to resize menus to make them more or less obvious on the device's main screen.

Samsung has created two new versions of its S-Pen electro-stylus to go with the Fold 3. The S Pen Pro also works on a Galaxy Tab or Galaxy Book and is 173.64mm long. A smaller S Pen Fold Edition is just 132.1mm.

Neither slots into the device, as the S Pen did with the Galaxy Note. Instead, Samsung now offers cases that house both the smartphone and pen.

Also new is the Galaxy Watch4, which debuts the refreshed Wear OS built by Samsung and Google. Samsung has also updated the Galaxy Buds.

The Register has not been able to get hands on with the new devices, but videos shown by Samsung suggest the foldables are more practical and less of a novelty.

Samsung's ambition has long been to create a device that satisfies almost every mobile scenario – the last Galaxy Note was given a 120Hz screen refresh rate and touted as ideal for gaming or using Microsoft Office's mobile apps. In truth, it did neither spectacularly well – 120Hz screens are battery-burners, and even with handwriting and speech recognition included the device doesn't lend itself to rapid content creation.

The Register expects that Samsung's Android tweaks are what will make or break the Fold in terms of making the form factor truly useful because if they make it a real tablet alternative, it will find a niche.

And if it doesn't, it still has fashion victims to target. ®

PS: Microsoft says it has made changes to Office, Teams, and Outlook so that they run better on the new Galaxy mobile hardware.