Chinese consumer electronics upstart Xiaomi has let a robot dog off the leash.

The not-so-beating heart of the company's "CyberDog" is an Nvidia Jetson Xavier board that offers 384 of the GPU specialist's CUDA cores plus 48 Tensor cores. The board also includes a six-core Carmel ARMv8.2 64-bit CPU.

Xiaomi says it's also used some of its smartphone camera tech, and one of Intel's RealSense Depth modules, to let CyberDog see the world. Indeed, the hardware hound is said to have simultaneous localization and mapping capabilities out of the box – so it could, in theory, take itself for a walk.

Just like a real dog, the cybernetic canine can be voice activated. Speak a wake word and it will ready itself to do your bidding. Unlike an organic animal, it can also be controlled with an app. 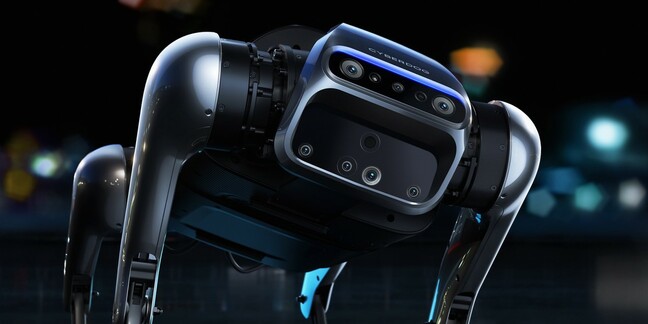 CyberDog is experimental for now. Xioami has made a thousand of the beasties available to enthusiasts and engineers, priced at RMB9,999 (US$1550), in hopes they'll figure out what to do with the creature and its three USB-C ports and single HDMI port. As CyberDog's design is open source, Xiaomi hopes owners will share whatever tricks they teach the silicon spaniels.

Xiaomi is not the first to offer a robot dog: rival Chinese outfit Unitree Robotics also offers one, for $2,700. And of course Sony has been at it for ages, launching its "Aibo" in 1999 with a similar tactic of offering a small number of initial units. Aibo, however, was a packaged consumer product that was updated annually for seven years before the product - ahem - went to live out its days on a farm. Xiaomi has not indicated if it ever intends to create a mass market product. ®