Project said to be well resourced, lots of tweaks in new version, plenty more to do

Thunderbird 91 has been released with support for Apple Silicon and other enhancements.

This version entered the release channel yesterday, according to the release notes, and follows the emission of Firefox 91. You can fetch Thunderbird directly from here, or wait for your system package manager to catch up and hand it out.

Mozilla's Thunderbird is a cross-platform, open-source email client. Its future looked uncertain in 2015 when Moz CEO Mitchell Baker said "sooner or later paying a tax to support Thunderbird will not make sense as a policy for Mozilla." Early last year, though, matters improved, with the formation of a wholly-owned subsidiary, MZLA Technologies Corporation, to manage the project.

... the state of Thunderbird's finances are very good

In March this year, the project reported that 2020 was "a much better year than 2019 for donations to the project," with donors perhaps responding to the threat of discontinuation giving around $2.3m. It was also stated that "non-donation income is currently negligible."

And according to the team, "the state of Thunderbird's finances are very good." At the time, there were 15 people employed, including six developers, a lead UX architect, an add-ons coordinator, and a build engineer. Judging from the official stats page, there are around 8 million daily active installations, a number that has been relatively steady over the past 12 months. The figures for operating systems only go to March this year, and show 78 per cent Windows 10, 14 per cent Windows 7, 4 per cent Mac, and just 0.79 per cent Linux.

New features in version 91 include native support for macOS on Apple Silicon – the iGiant's homegrown Arm-compatible processors for its personal computers – plus a redirect option that forwards an email while preserving the original subject line, content, and reply-to address. It also includes account reordering, a warning pop-up when attempting to reply to a no-reply address, and support for non-ASCII characters in email addresses.

A PDF viewer, PDF.js, is now integrated into Thunderbird. There are several improvements to the calendar, including the ability to open .ics files by double-click and an Edit item in the right-click menu for an event. Master password has been renamed to Primary Password. The default IRC chat server is now libera.chat rather than Freenode for ... reasons. OpenPGP support is tweaked.

At a low level, an important change is the implementation of a project called Fission, and related work on multi-threading, which is said to improve both security and performance. "Thunderbird is multi-process enabled (Fission). This became top priority once we realised it needed to be done and the potential for regression fallout. Doing so delayed a bunch of other stuff, notably the new Address Book," said software engineer Geoff Lankow.

Thunderbird is highly valued, free, though donations are requested, and open source, so the fact that it is well resourced and that the team is delivering improvements is welcome.

That said, a quick spin with the new version does show some limitations. Connection to Exchange, Outlook.com, or Office 365 is by IMAP, unless you purchase an add-on called Owl for Exchange at the modest cost of €10 per year. This extension may be necessary if IMAP is not enabled by your organization. 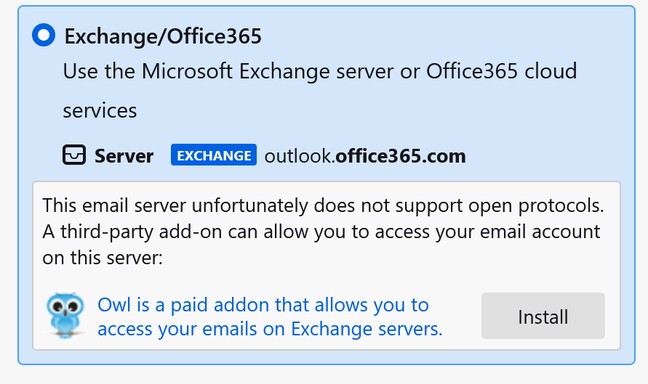 A dialog in Thunderbird pins the blame on Exchange, stating "this email server unfortunately does not support open protocols." Still, users would no doubt be glad if this Owl functionality were part of the core product. Gmail access is also via IMAP and we found it somewhat slow to retrieve messages.

It appears that not everything here, the roadmap for 91 and beyond, is done yet, and it is easy to think of other things that would be desirable. The user interface looks dated and intricate, though those familiar with it perhaps like it the way it is. There is no mobile version of Thunderbird, which is a shame if only because a strong open-standards email client is a good antidote to the dominant email services run by Microsoft and Google which lean towards their own platforms. ®