Those other AlmaLinux offerings with 'software plans'? Not affiliated, says community leader

CentOS replacement AlmaLinux will be available on Azure Marketplace at no extra software cost, and Microsoft will sponsor a global mirror network for the operating system, it was announced today.

Though AlmaLinux is free, open-source, and can be downloaded here, the Linux distro is also now available in the Azure Marketplace at no software cost.

In addition, "AlmaLinux will operate a global network of mirrors on infrastructure provided by Microsoft," according to today's announcement, which adds that "AlmaLinux and Microsoft will also work together to provide additional information, documentation and educational resources for Azure users."

When the end of CentOS was announced last year, along with a shortened end of life for CentOS 8 (supported only to the end of 2021), it left a vacuum for a community edition of Linux that would be binary compatible with Red Hat Enterprise Linux (RHEL). CentOS co-founder Gregory Kurtzer was quick to come up with the Rocky Linux project, though another contender, AlmaLinux, was earlier to delivering a production-ready build, thanks to its sponsor CloudLinux, which was already building a similar paid-for distribution.

The first AlmaLinux GA release was in March, at which time the AlmaLinux Foundation was also formed, a non-profit which holds the AlmaLinux trademark. AlmaLinux has now been pulled over 70,000 times from Docker Hub, according to the project.

There is a certain amount of rivalry between Rocky, AlmaLinux, and others such as Oracle Linux, which is also RHEL compatible and free. Despite substantial community warmth towards Rocky Linux, which delivered a production build in June, it is behind AlmaLinux on some issues such as an image signed for Secure Boot. In July Kurtzer told us he hoped this would come "within weeks" but as of now it is still not available, though it is close according to discussions on the Rocky forums. 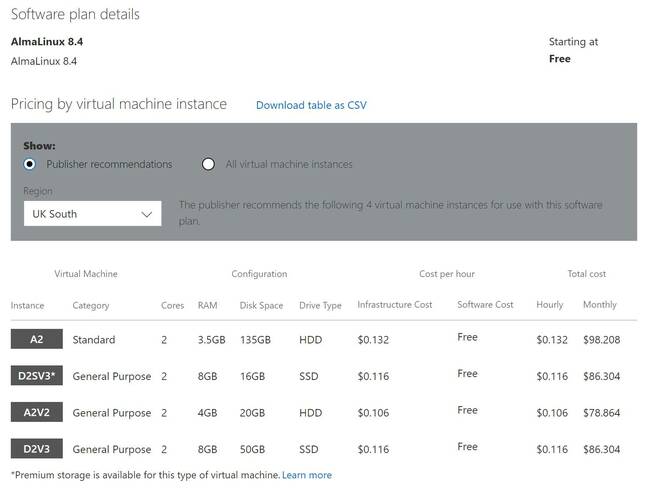 Example pricing for AlmaLinux on Azure in the UK ... or admins can choose a Basic A0 VM with 0.75GB RAM and a small hard drive for $13.29 per month

The Azure Marketplace is confusing for Linux users. Admins who head to the Azure Portal to create a virtual machine have to select an image, and for some time Alma Linux 8 (as well as some other distros) has been on offer there under "software plans" costing a few cents per hour, plus the cost of the Azure infrastructure.

Now AlmaLinux is available at no extra cost, as described here. What are those other offerings? "They are not affiliated with AlmaLinux. In some cases, support is included but most of the time they’re just hoping someone clicks on their offering and pays for it," AlmaLinux community manager Jack Aboutboul told The Reg.