US boffins: We're close to fusion ignition in the lab – as seen in stars and thermonuclear weapons

The Reg speaks to chief scientist in fuel-compression experiment

The US government's nuclear physicists say they are closing in on fusion ignition – the point at which a fusion reaction becomes self-sustaining – in the lab by compressing matter with lasers.

We're told they were able to produce more than 1.3 megajoules of energy in 89 picoseconds – that's 89 trillionths of a second – at Lawrence Livermore National Laboratory's National Ignition Facility (NIF) earlier this month. That energy release works out to 15 petawatts, 311 grams of TNT exploding, or the chemical energy equivalent of a big pile of batteries.

"A nine-volt battery stores about 15 kilojoules of energy, so the energy content is roughly equivalent to 80 nine-volt batteries of chemical energy," Omar Hurricane, chief scientist for the Inertial Confinement Fusion Program at LLNL, told The Register, putting the 1.3MJ into perspective.

Crucially, that figure is about 70 per cent of the energy fired into the experiment, which involved crushing a tiny amount of fusion fuel until its atoms fused, releasing energy. This is a notable milestone, the scientists said, because it puts them at the threshold of fusion ignition, which is the point where a fusion reaction becomes self-sustaining: the energy released keeps the reaction going, continually producing energy until the fuel runs out, as seen inside stars over the eons. Humans can potentially harness this energy for various purposes.

In the experiment, 192 laser beams were focused on a vessel to produce x-rays that compressed a pellet of fusion fuel within that container, triggering a fusion reaction that released energy from a hotspot the diameter of a human hair. 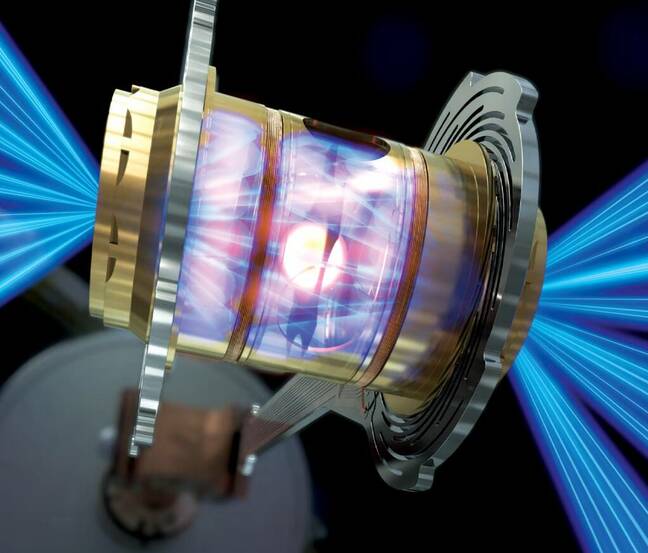 An illustration of the fusion fuel capsule held inside a hohlraum in the NIF experiment. Laser light fired at the chamber is converted into x-rays that compress the pellet to start a fusion reaction ... Source: Lawrence Livermore National Laboratory's Science and Technology Review [PDF]

"The surface of the pellet explodes generating pressures of approximately 200 million atmospheres, which drives the pellet inwards upon itself – an implosion. The fusion fuel inside the pellet is ultimately driven to pressures of many hundreds of billions of atmospheres, exceeding the pressures at the center of the Sun for a fleeting moment. The subsequent fusion reactions are vigorous enough that the fusion energy liberated exceeded the energy absorbed by the pellet by about 5x."

The fusion fuel inside the pellet is ultimately driven to pressures of many hundreds of billions of atmospheres, exceeding the pressures at the center of the Sun for a fleeting moment

It should be stressed that this is a science experiment to study the compression of fusion fuel, and to achieve a near-self-sustaining fusion reaction, rather than a practical demonstration of nuclear power generation. An awful lot of electricity was used to fire the lasers, after all.

"The bottom line is that very little energy ever makes it into the fusion fuel as compared to the electricity we used to charge the laser. However, the fusion energy generated was about five times the energy absorbed by the capsule, and about 70 per cent of the laser energy shot at the target – these are the significant aspects."

Although this work could lead to developments in fusion-powered electricity generation, the study of stars and the cosmos, and whatnot, a key aim of the NIF is researching the design and maintenance of thermonuclear weapons.

Though these complex, miniaturized devices can be simulated using supercomputers, the results need to be verified, and this is done through experiments such as this. America promised not to carry out further thermonuclear bomb tests, though it still has to ensure its stockpile remain reliable, safe, and up to date. That involves studying the materials in the weapons and processes involved when they explode.

The fusion fuel used by NIF is a mix of the hydrogen isotopes deuterium and tritium. These isotopes are a critical component of multi-stage thermonuclear weapons. To put it really simply, when it's time for a warhead to detonate, conventional explosives are used in the device's primary stage to compress a core of nuclear fuel – typically made of plutonium – to start a fission reaction that emits, among other things, x-rays. These x-rays outrun the blast of the primary stage and are channeled onto the secondary stage to compress another fuel – typically lithium deuteride – that ultimately involves the fusion of deuterium and tritium atoms to release incredible amounts of energy in a tiny fraction of a second.

There are even stages potentially in between, depending on the design, that involve compressing the hydrogen isotopes to boost the fission stage, but we won't get into that. Essentially, you can see that crushing fusion fuel using radiation pressure to achieve a reaction in the lab is rather important for studying weapon physics. The laboratory has more information on this process here.

"These extraordinary results from NIF advance the science that [America's National Nuclear Security Administration] depends on to modernize our nuclear weapons and production as well as open new avenues of research," Jill Hruby, the Department of Energy's undersecretary for Nuclear Security and NNSA administrator said on Tuesday.

The LLNL scientists are planning to publish the results of their experiment in an upcoming peer-reviewed paper. In the meantime, they will focus on trying to replicate their findings and figure out how this aids or affects other areas of research. ®