Despite a record year in 2019 that many analysts believed would only be topped in 2020, a report by tape storage heavyweights at the LTO org says the medium's sales dropped significantly last year – by nearly 8 per cent – with 105,198PB of total tape capacity (compressed) shipped.

Tape shipments over the past few years have been increasing, and have been projected to grow considerably by 2025 by industry analyst IDC, which estimates data generated to the tune of a potential 175 zettabytes a year by then. With many vendors shifting to a hybrid cloud model, and all the data in the cloud needing to be backed up, much of this is cold storage – and currently this means the (relatively) cheaper option of tape.

However, in a statement accompanying the release of the report, the LTO consortium – comprising Program Technology Provider Companies HPE, IBM, and Quantum – conceded they'd been "optimistic for 2020," adding that "global shutdowns and other factors outside of our collective control led to a reduced performance."

Eric Bassier, senior director at tape storage bigwig Quantum, said: "Coming off record capacity shipped in 2019, we were optimistic for 2020 – but global shutdowns and other factors outside of our collective control led to a reduced performance. We're optimistic that there will be a return to the prior capacity growth trend in 2021."

He added: "Despite the unexpected headwinds for many segments of the technology industry produced by the pandemic, overall LTO tape capacity shipped in 2020 was strong in context." 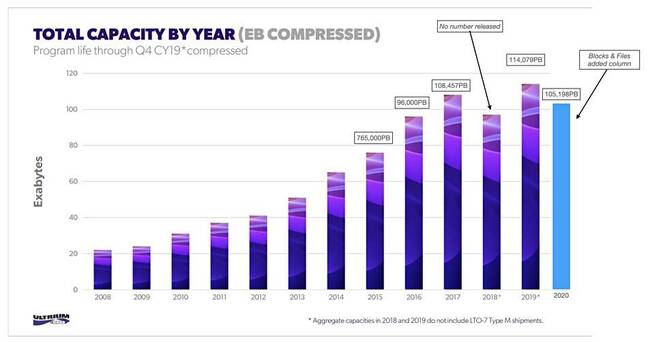 The 2020 LTO Tape Provider Company chart (plus our additions)

LTO tech is currently in its eight generation, with LTO-8 specs supporting tape cartridge storage compressed capacity of "up to 30TB" and "tape drive data transfer rates of up to 750MB per second for over 2.7 terabytes of storage performance an hour per drive."

Quantum is reporting increased tape library system sales to hyperscalers, so tape media sales should start picking up this year and into the next. Nonetheless, the 2021 total media ship number may not equal the 2019 record.

Speaking earlier this month about Quantum's results for Q1 '22 (ended 30 June), chairman and CEO Jamie Lerner said: "Demand ... continued to be strong, with a significant sequential increase in customer orders. A large majority of these orders were from hyperscale customers for products that are most affected by the current supply constraints."

He noted that the "dynamic has caused our backlog to reach unprecedented levels" – although he conceded not all backlog represents potential revenue. To give an idea of the scale of the problem, Lerner said: "Historically, our backlog has been 5 per cent or less of our reported quarterly revenue. As of the first fiscal quarter, our backlog has grown to $30m, compared to approximately $14m in the previous quarter and $2m in the year-ago period." ®