Supercomputing above the clouds

Microsoft and HPE were cock-a-hoop yesterday with the trumpeting of data bursts from HPE hardware aboard the International Space Station (ISS) to Microsoft's Azure, starting with the inevitable "hello world".

HPE's first spaceborne computer, based on an Apollo 40-class system, returned to Earth in 2019 after nearly two years aboard the ISS. The second went up earlier this year, replete with Red Hat 7.8 to keep things ticking over and software to handle any failures when components receive a zapping in the harsh environment aboard the ISS.

Oddly, Microsoft's bragging on the matter yesterday concerning data bursts pumped from HPE's hardware into Microsoft's cloud failed to mention that Linux was running the show. Windows for Space Stations, anyone? 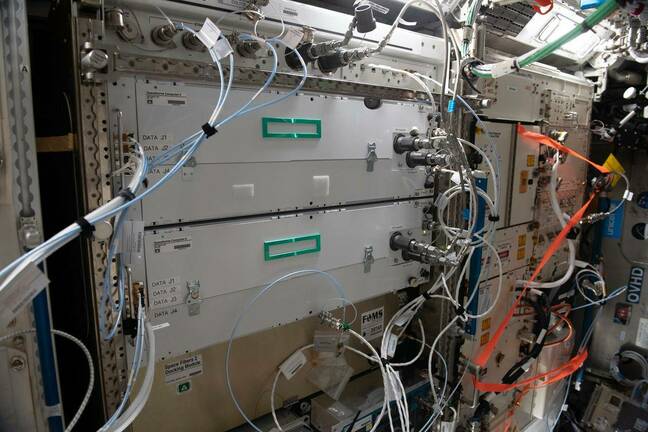 How are your cabling skills? (pic: NASA)

At the time of launch, the thinking was that Azure Space might be used for the occasional workload. After all, one of the goals of Spaceborne missions is to demonstrate onboard autonomy and Spaceborne-2 upped the hardware specs with GPUS aimed at machine learning and image processing as well as Cascade Lake Intel Xeon processors (an improvement on the Broadwells of before).

Shoving HPE's Edgeline Converged EL4000 Edge System into the mix is the ultimate example of edge computing, and usage examples were given including having the hardware assess traffic trends, pollution, and missile launches.

However, Spaceborne-2 has also demonstrated the ability to offload computations to Azure, making best use of the meagre bandwidth (two hours per week with a maximum speed of 250 kilobytes per second, according to Microsoft) to send only the data that needs the extra scrutiny afforded by Microsoft's Azure computers.

Dr Mark Fernandez, principal investigator for Spaceborne Computer-2 at HPE, told The Register: "I envision there will always be a need for processing at the 'core'. i.e. edge-to-core or edge-to-cloud. But the future holds two promises. One is that edge processing will become more powerful and the need to process at the core will be reduced. Hence, self-sufficient computers enable self-sufficient explorers.

"Secondly, orbiting 'gateways' or next-gen Space Stations around the Moon and Mars may house supercomputing, AI/ML, Quantum, and other capabilities sufficient to address the requirements."

Thus far, HPE has completed four experiments (including shunting "hello world" down to Microsoft's cloud). Four others are under way and 29 more are in the queue.

The clock is ticking, however. The US portion of the ISS is only funded through 2024, although an extension seems likely unless somebody sends the station off into another spin with a borked science module.

"We've got to get as much as we can done in the time we have left, " said Christine Kretz, vice president of programs and partnerships at the International Space Station US National Laboratory. ®