Having trouble getting your mitts on that Raspberry Pi? You aren't alone

The Register talks to Eben Upton about supply, demand, and hand-to-hand combat until 2023

Interview "It's hand-to-hand combat" was the phrase used by Raspberry Pi supremo Eben Upton when talking to The Register about meeting demand amid the ongoing chip supply challenges faced by the computer industry.

Back in May, Upton had told The Reg "We're very good at pipelining" and the company has continued to pump out Pis even as shortages bit. Over 650,000 units were shipped in July, and earlier this year the company managed 800,000 a month. 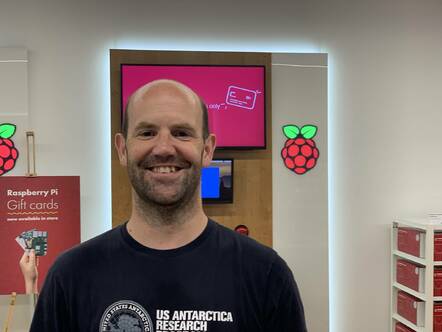 However, despite that pipelining, the diminutive computer has suffered supply hiccups as demand continued to surge. While the shelves of the company's outlet in Cambridge, UK, remained relatively full ("realistically," said Upton, "this will probably be the last place to run dry"), other suppliers are quoting some impressive lead times.

At time of writing the retailer Farnell was posting a lead time of 373 days for a 4GB Pi 4 Model B.

Supplier RS Components quoted a despatch date of 1 September for the same unit, while the Pi Hut has stock ready to go. Throughout the range, some models remain elusive.

The two gigabyte variant of the Pi 4 certainly seems to be a little thin on the ground (Upton told us the four gigabyte incarnation was the "sweet spot" for consumers although industrial customers tended to favour the lower memory version.)

What's stopping us from flexing up is basically everything... everything is on fire...

"The aspiration of Raspberry Pi was always to be able to serve large industrial orders from stock," he said.

"What's stopping us from flexing up is basically everything... everything is on fire.

"It's the motto of this year," he added.

Register reader Chris, who noted the fun at Farnell, also highlighted supply problems for the Pi Zero, with some customers facing rationing for the in-demand product.

"Zero supply is extremely tight at the moment," said Upton, "it's been disproportionately affected both by the increase in general demand and the push-out of semiconductor lead times."

"We're doing our best to address it, but it's a difficult balancing act serving both OEM customers and individuals via the Approved Reseller network."

"I think we'll survive through the rest of 2021 with non-Zero products just about in stock," he said, "and then be in a much healthier position from Q1 of next year.

"But honestly the hand-to-hand combat element is unlikely to end until 2023."

Balancing the needs of a one- or two-unit purchase against an order for 10,000 units remains a challenge; Upton told us that demand from industrial applications has jumped, adding to the needs of enthusiasts enduring a year of lockdown.

"What's happened this year," he said, "is the industrial side of the business has grown. I think, in the first six months, we did more compute modules than in the whole of last year."

The mix has mostly been Compute Module 3 and 3+, although Upton noted that the Compute Module 4 had taken off faster than expected despite the change in form factor and a tendency for industry to shy away from change.

Last month, according to Upton, over 100,000 Compute Modules were shipped. A figure not to be sniffed at.

And it is industry applications on which Upton and co have an eye on, with the recent launch of the RP2040 chip, found in the Raspberry Pi Pico. "We've shipped around 800,000 Picos," said Upton. "We've got about a 600,000 order backlog."

"They are separate franchises," he explained. "The Pi is a great development platform for RP2040 and RP2040 is a great companion for the Pi.

"Obviously, the Pi is a vastly larger franchise than the semiconductor side. On the other hand, the microcontroller business is an enormously large business to grow into."

As well as the RP2040, the troubled PoE HAT received an update this year in the form of the PoE+ HAT, aimed at pumping more power to the Pi via Ethernet (depending on one's choice of switch and cabling.)

The update has not been without issues. Although noting the changes in the design, "I don't think it's hotter," said Upton. "We've done a lot on the thermal design to dissipate that extra power more effectively."

However, "I think we're replacing 12mm bolts with 11mm bolts," he added. Observers have suggested 10mm might have been better, but Upton is concerned about the risk: "the nut can fall off the bolt." And bad things would happen...

A place where one certainly wouldn't want loose nuts is on the International Space Station (ISS), which has had a pair of Raspberry Pi computers onboard since ESA astronaut Tim Peake deployed them during the Principia mission between 2015 and 2016.

Those units are getting a little long in the tooth, although remain as popular as ever with participants keen to see code running on orbit. Recently, the Raspberry Pi team boasted of almost 15,000 participants and over 9,400 programs running on the Astro Pis. While the brightness of the LED displays of the devices has caused grief for astronauts, the hardware itself has long been surpassed by what is available to students on Earth.

ESA has remained relatively tightlipped on a replacement for the computers, although Upton mused on some of the challenges that something like a Pi 4 might face on the ISS. The far smaller 28nm process (down from the 40nm of old) means more is packed into a small die, making for greater potential for upset in the harsh environment of the ISS.

Assuming, of course, new Astro Pis are indeed on the way.

The successful engagement with participants of both the Mission Zero and Mission Space Lab would make it an easy win for space bosses and a reminder of the original mission of the Pi itself – to generate an interest in coding. ®