But first, a holiday while Mars is on the other side of the Sun

China's National Space Administration has announced that the Zhurong Mars rover has ticked off everything on its to-do list, and is still ticking over, so has been assigned an extended mission.

Zhurong left Earth in June 2020 atop a Long March V rocket, and on May 15th 2021 landed on Mars. That feat made China the third nation to land a working robot on the red planet, but as the Soviet Union's only successful landing – Mars 3 in 1971 – failed less than two minutes after landing and only sent back one featureless image, China is generally held to have been second to the USA in the rover-landing caper.

China's rover has done well, travelling 889 metres in its time on Mars and gathering ten gigabytes of data. The Space Administration says it is in fine condition, has put all of its scientific instruments to work, and has sufficient energy to head off in the direction of what it's described as "the ancient land-sea junction in the southern Utopia Plain to implement expansion missions".

The Administration added that it has released data to domestic scientists and plans monthly releases.

But it has also warned that we should expect to hear rather less from Zhurong from mid-September to late October, when Mars and Earth will be on opposite sides of the Sun – which makes radio communications a tad tricky. 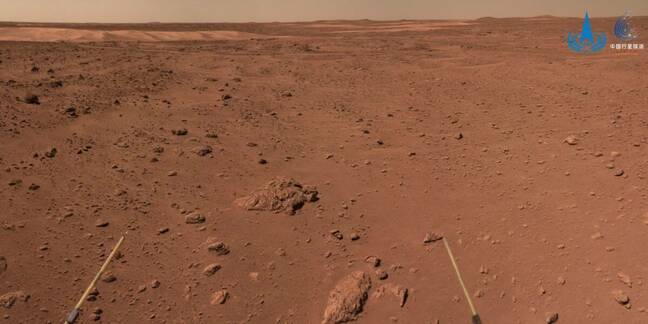 Mars as seen by China's Zhurong rover.
Click to enlarge

Admirers of China will have to be content with action a little closer to home – such as the Saturday spacewalk by the crew of the nation's Shenzou space station. Two taikonauts exited the station to install a heat pump and panoramic camera. ®