Robots don't smoke, says Alibaba, and that's why they deliver parcels so fast

Alibaba has revealed one reason it's decided to deploy 1000 rolling delivery robots across China: they don't stop work to smoke.

"Last-mile delivery has always been the knotty problem of e-commerce," states a post from the Chinese web giant. "It's costly, time-consuming and largely unmapped.

"This final leg in a journey that stretches from the manufacturer to the buyer can flummox human couriers. Delivery people can get lost trying to find a flat in a tower block or navigate a large housing estate."

The post hints vaguely at tech that lets delivery bots find their way around such locations more efficiently than humans, and asserts "Alibaba's robots will be able to make the trip without deviations or smoke breaks".

Over 300 million Chinese smoke, most of them men. 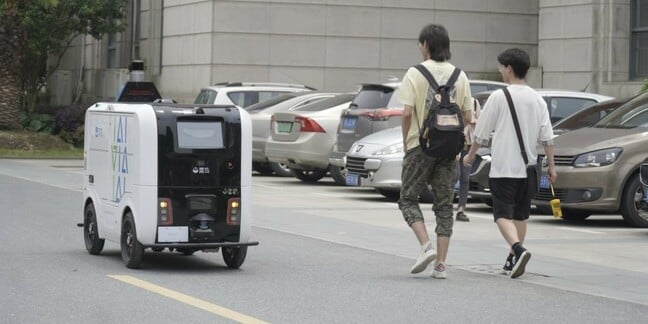 Alibaba's bots will pick up parcels at a local drop-off point, then use footpaths and bike lanes to reach their destinations.

The company says its bots can predict the next five to ten seconds of movement by nearby people and vehicles and use that analysis to avoid collisions 99.9999 per cent of the time.

Alibaba has nonetheless chosen university campuses and housing estates as its testbeds, because they have less traffic – and slower-moving vehicles – than other locations.

The non-smoking campus tests are therefore intended to hone algorithms for wider deployment. ®