A Baltic bork in the Republic of Lithuania

Bork!Bork!Bork! Bork takes a trip to the Baltic today, with a wraparound bit of digital signage demonstrating that all is not well in the Republic of Lithuania.

It appears that Windows has taken a well-earned break from disgracing itself over digital signage. Instead, a mystery app occupying a quarter of the corner is pleading for Feedback. 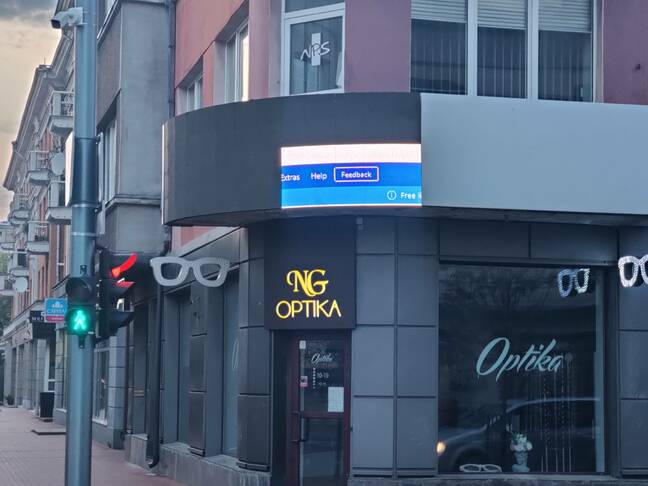 Help would be handy too, as would Extras. An extra three-quarters of the digital display area, to be precise.

Spotted by eagle-eyed Register reader Patrick earlier this month, the cockup is writ large enough for observers to not require the services of the optician below in order to spot it. The use of English is a bit of a shame – Lithuanian is one of the last living Baltic languages, but sadly there appears to be no localisation love to be found in the language of bork.

Our reader suggested that perhaps it was a chunk of TeamViewer on show. We'd have to agree – the menu items, colours, and fonts certainly hint at the product, although we do hope that the word "Free" at the base is not a sign that somebody is using improperly licensed software. If so, borking some digital signage does seem a somewhat extreme reaction.

As for the location of the distressed sign, it can be found on the corner of Vilniaus and Tilžės, surrounded by banks and other stores. Our reader spied it while walking off "a large plate of ice-cream-filled crepes," the lucky devil.

A glance at a popular street-viewing platform will show the sign in happier times, tempting passers-by with all manner of delights. That same platform will also show snaps of the same corner before the arrival of the opticians when an insurance outlet occupied the space.

If only someone had thought to take out bork insurance. Although just imagine filling out a risk assessment for that... ®