Playdate handheld game system torn to pieces, crank and all

We never managed to fix our Game Boy, but maybe we could repair this?

Summer is often referred to as "The Silly Season" and so it was with delight that we noted the iFixit team had turned their screwdrivers onto the gaming nostalgia-fest that is the upcoming Playdate.

The colourful little handheld (colourful except for the screen) is a welcome respite from the likes of the Nintendo Switch and upcoming Steam Deck. No eye-wateringly high resolution and blistering refresh rates here. The Playdate is a throwback to a simpler time, and a reminder of our much-missed Nintendo Game Boy (sadly the victim of a short drop onto unforgiving concrete many decades ago). 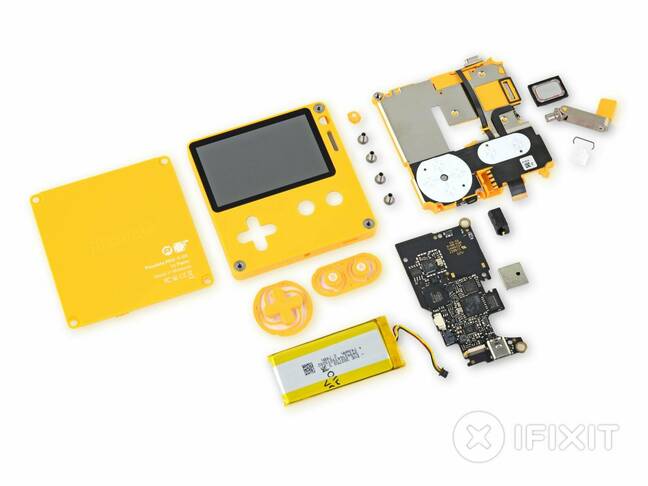 The iFixit team were thankfully less careless and used a Game Boy Color for scale – the Playdate is quite a bit thinner than the Nintendo, even with the crank.

The yellow plastic case was swiftly opened by the team, with the aid of care and a screwdriver, to reveal a battery and a warning that breaking anything within the case would the void the warranty so "please, be careful!" exhorted the makers.

The good news is that the battery, which clocks in at 2.74Wh, is only lightly glued in place and relatively easily extracted. Other components look equally simple to pull out, with an ARM Cortex-M7 SoC performing processing duties, backed up by 128Mb of SRAM and 4GB of eMMC flash memory among the chippery on the board.

Unlikely to scare a Raspberry Pi, but more than sufficient for this little thing.

Most interesting is the crank, which is used as an analog controller in some of the Playdate's games (purchasers can expect two new games per week for 12 weeks after setup). Sadly it cannot be used to add a bit of extra juice to the battery. A magnet in the shaft hits a Hall effect sensor. The result is no surfaces to wear out and, most importantly, none of the drift that afflicts controllers for other certain other consoles.

It's not all good news, however. The screen is glued to the front of the plastic case, making a non-destructive removal tricky and the controller buttons are similarly stuck to a circuit board in the middle of the handheld's housing.

The display and controls (as well as a soldered USB-C connector) drag things down to a 6/10 repairability score, a bit below the 8/10 of the Nintendo Switch.

Still, the Playdate is an undeniably neat bit of kit and appears relatively repairable for when the inevitable drop happens.

Alternatively, one could just pop a Raspberry Pi Zero into a "Gameboy Inspired" RetroFlag GPi case in order to scratch that nostalgia itch.