'People wanted a cleaner and simpler Start' said Microsoft, but not everyone's happy

Windows 11 users are unsure of the merits of the new Start menu, according to feedback so far.

The Start menu always seems to be at the centre of controversial changes to the Windows desktop. It was a triumph in Windows 95, improved steadily up until Windows 7, then transmuted into a chunky full-screen affair in Windows 8, to the horror of many users. In Windows 10 it became a hybrid of the Windows 7 and 8 approaches, restored to its spot in the left-hand corner, but retaining a tiled section.

It is all change for Windows 11, though. According to Microsoft, "research showed people wanted a cleaner and simpler Start," and it was redesigned (as was Windows 8) by taking inspiration from smartphones, "being able to pan different pages with touch, for instance," said the company.

The consequence of "simplifying" the taskbar and Start menu is that many features have disappeared – which has not gone down well with Windows insiders, a group in which power users are no doubt over-represented.

In addition, there are aspects of the new design that some find annoying, like the large space given over to "Recommended" content.

In our build, it currently shows recently opened documents, but it seems Microsoft could use this both for AI-driven recommendations and perhaps advertising. The guidance for OEMs includes the ability for vendors to pre-populate the section with their own apps "for up to seven days."

Microsoft has so far resisted requests to make this space resizable or removeable. 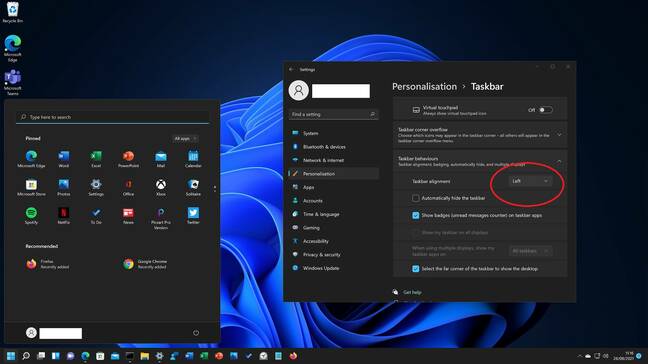 Another oddity is the way the new Start munges app navigation and generic search. The Windows 11 Start has two distinct personalities. Click it and the user gets pinned apps, the above-mentioned Recommended panel, and links for All apps and More recommendations. There is also a "Type here to search" and if the user starts typing, it morphs into a Search application, the window resizes, and there are tabs for All (the default), Apps, Documents, Web, and via a More option, Email, Music, Photos and so on. On a PC with an Office 365 account, this can also include organisation documents.

Although this is a useful feature, the generic search can get in the way of app navigation, and seems to be in part a strategy to promote Bing by using Microsoft's search engine even if Google or an alternative is the default in the browser. Once in the search panel, there is no way back to the app navigator except by clicking Start again. 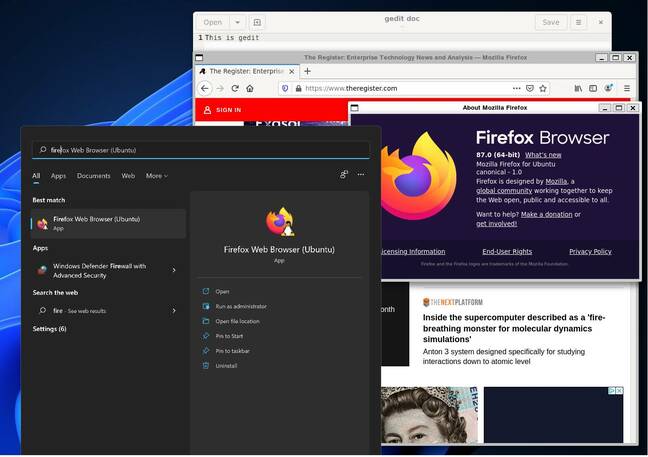 Windows 11 prompted to run the Ubuntu version of Firefox when WSL was installed, but the treatment of Linux GUI apps is inconsistent

As an aside, there is some intriguing but inconsistent behaviour with Linux applications in the Windows Subsystem for Linux. We did not have Windows Firefox installed, but Firefox for Ubuntu came up in a search for Apps and runs in its own window (no Linux desktop). However, Firefox for Ubuntu does not appear in the All apps list; and searching for gedit (a Linux GUI editor) does not offer to launch it even though it is installed and runs from the Ubuntu command line.

Moving beyond Start and taskbar, Windows 11 previewers are struggling with some of the changes to settings. One is the way default apps are selected: historically often contentious since there are commercial implications and many users are content with defaults and do not change them. Default applications are based on default handlers for file and protocol types but in Windows 10 this is somewhat hidden so that users can choose a default for intuitive categories like Email, Music player, Web browser and so on.

In Windows 11 this has gone and users are invited to "Enter a file type or link type," a big ask for a less technical user. This means that when Google Chrome, for example, invites the user to "Set as default," the ensuing dialog is rather unclear. The solution is to find Chrome in the list and manually set it as default in at least four categories: HTM, HTML, HTTP, and HTTPS.

Mozilla has found a way to do this automatically for Firefox so other vendors may follow. 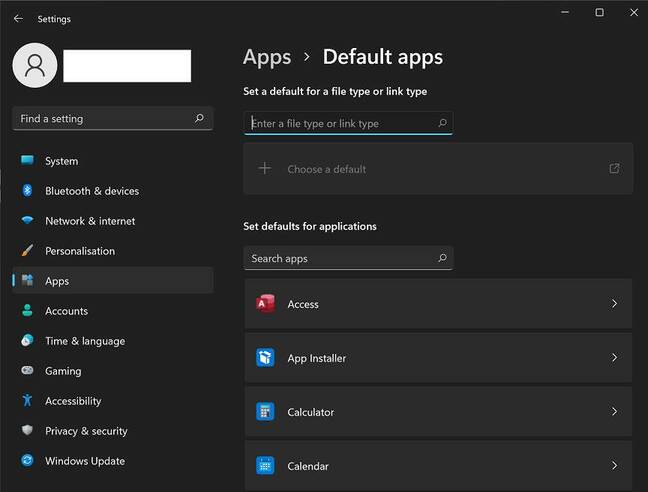 Just make Chrome my web browser: the Default apps settings are not user-friendly

Other notable feedback includes a performance issues and a possible memory leak in File Explorer, with over 2,200 upvotes. "I'm using a 32-core AMD Threadripper with 64 GB of RAM. Opening 10+ File Explorer windows reminds me of an old Intel 386," said one user.

It must be noted that most insiders use Feedback Hub to report bugs and problems, so the above does not fairly represent what users like about Windows 11 or those who are happy with the changes. Further, the operating system is still in beta so Microsoft may make adjustments – though it seems unlikely that radical changes to the new Start menu will be made so late in the cycle.

Some details may change, though. Typing taskbar into Settings shows an option for "Customize how to group similar windows." But if you select it, nothing happens. Work in progress? 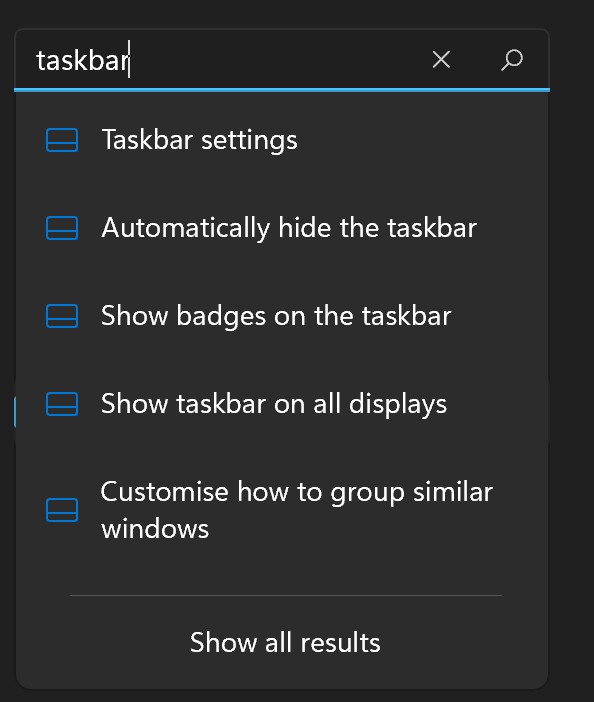 It will also be possible for users to install alternative Start menus, as with Windows 8 and Windows 10. Users can also install shortcuts on the desktop and position them as they like, while those who prefer a more minimalist approach can press Windows + R and type an application name there. ®