The Central Japan Railway Company will replace smoking rooms on some of its Shinkansen bullet trains with Zooming cars.

The company already offers on-train WiFi, but recognizes that a certain viral pandemic has made video conferencing rather more popular. It feels its trains should not be Zoom-free zones that inconvenience business travellers. 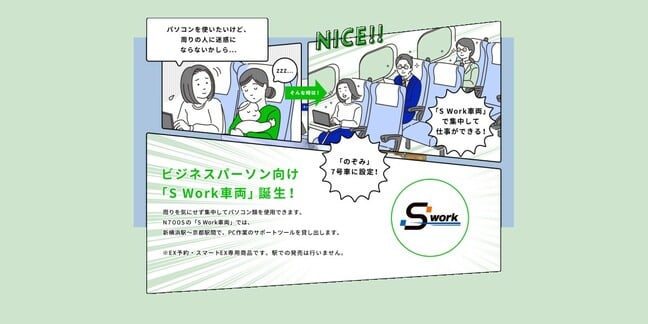 It has therefore cooked up the "S-Work vehicle" and equipped it with WiFi that offers double the speed of its conventional service, plus in-seat power. The Railway will even lend passengers a mouse, a privacy screen for their laptops, and a pillow on which to rest their computers.

Some trains will even feature Zoom booths in spaces formerly occupied by smoking rooms. Smoking was banned on Japanese trains in 2020, so the space is going begging.

The service will only be offered on a couple of routes, and in one type of Shinkansen: the N700S tilting train.

That train can hit 300km/h on the Tokaido/Sanyo route, meaning passengers can Zoom at impressive terrestrial speed!

Central Japan Railway Company has popped a promotional site for the service here, complete with some rather lovely manga-style illustrations of its benefits such as the one above. ®

Japan to citizens: Get a digital ID or health insurance gets harder