On Tuesday, Tariq Rashid, a UK-based data scientist and author, tried to create a t-shirt design using on-demand print shop Spring to celebrate the Riemann zeta function, which is widely known among mathematicians and technical types.

"I thought I'd create a t-shirt of the function as it looks cool and is pretty famous," Rashid told The Register. "The Clay Math Institute has a $100m prize for solving the Riemann Hypothesis."

Rashid uploaded his design to Spring, formerly known as Teespring, so that it could be printed to order by netizens. The biz had other ideas. It removed Rashid's design from its store because his item included the trademarked word "zeta" in its descriptive blurb. 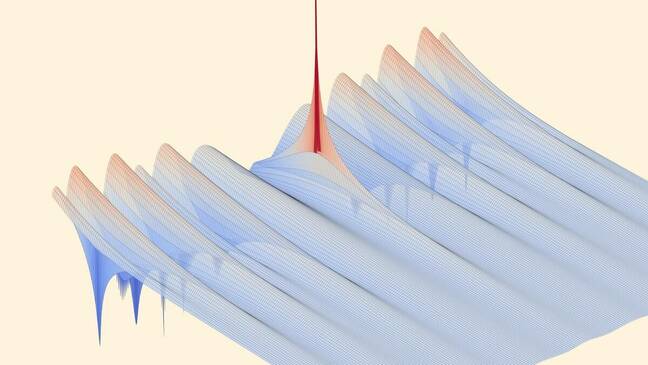 Rashid's Riemann zeta function plot he tried to put on a t-shirt ... Note, it was the blurb text with the design that triggered the takedown, not the graphic itself. Click to enlarge

When Rashid emailed Spring to object that zeta is a common mathematical term, the company's legal team replied: "We completely understand your concerns about our keyword block. As you are aware, Zeta is a letter of the Greek Alphabet. The Greek alphabet is currently protected legally by the Affinity Client Services. Due to this ownership and the takedowns we have received, we must police our platform for content using 'Zeta.'"

The legal eagles later said it had reviewed Rashid's content and "placed it back into active status because it does not violate current ownership." That said, that particular listing was not made publicly available again as we'll explain later.

Affinity Consultants, based in Carlsbad, California, for more than two decades has been coordinating trademark licensing oversight for various Greek-lettered organizations – fraternities and sororities – that use combinations of Greek letters to identify themselves.

Trademark law in the US, at least, requires trademark holders to police their marks but assumes that common terms can be used in different contexts – the purpose of trademark law is to prevent commercial confusion, not to grant exclusive ownership of a word in all contexts. That's how Delta Airlines and Delta Faucets coexist without prompting legal threats from Affinity Consultants on behalf of Greek letter organizations like Tri Delta.

The Register spoke to a trademark coordinator at Affinity Consultants, who wished to be identified simply as Brett. He acknowledged that commerce platforms have problems policing trademarked material.

"We work with Amazon too," Brett said. "They have been having difficulty with enforcement." He added that Affinity tries to educate companies about how to respond to trademark concerns, but cannot control how they do it.

In response to an inquiry from The Register, a Spring spokesperson suggested the t-shirt printing company was simply being over cautious.

"At Teespring (now Spring) we have rigorous technology in place to ensure any keywords monitored or contentious material featured is flagged and reviewed," the spokesperson said via email. "The business consistently errs on the side of caution when reviewing materials and products on the platform. Here an element was flagged as part of this vetting process, resulting in temporary removal from the site. This listing has now been reinstated to our platform after the review proved to have no contentious elements."

Rashid said that's not quite correct, explaining that Spring first removed his t-shirt listing from public view and prevented it from being published again. Then the biz allowed him to make the item live again while making it clear that doing so using the word zeta in the t-shirt's description will result in problems.

"They unblocked it but they also warned me future use of the word 'zeta' would again result in a ban," he explained. "They would not concede they were in error and that the generic word should be removed from their block list. I have written to Affinity on whose behalf they are protecting the trademark but have not had a response yet."

A copy of his correspondence with Spring's legal team appears to confirm that though the company unblocked the listing, so that it could be made live again, any use of the word zeta would trigger another takedown: 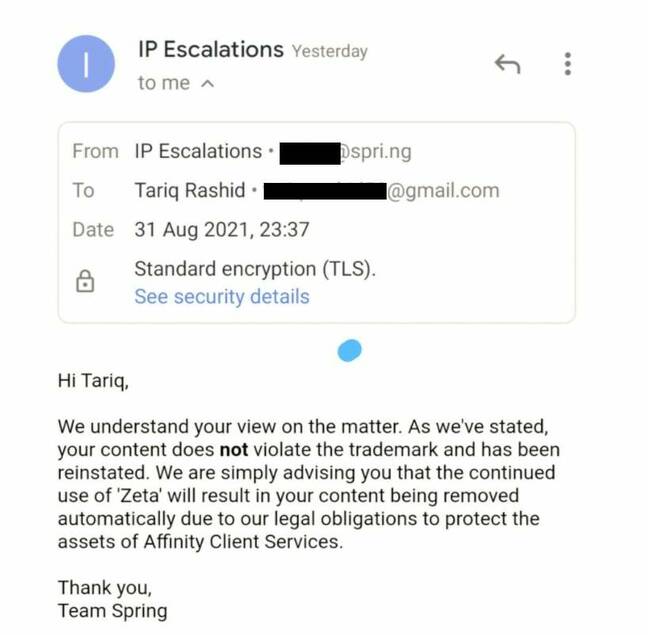 Spring's email to Rashid stating 'your content does not violate the trademark and has been reinstated' ... Click to enlarge

Rashid said he removed the troubled t-shirt listing and created another one without the word zeta in the descriptive text.

Asked whether future uses of zeta might result in a ban, Spring's spokesperson contradicted the explanation given to Rashid: "We can confirm that the user will not be banned for using this terminology on this occasion or for any future listing."

In our email inquiry, The Register also asked whether Spring product removals are done with an automated system that scans for keywords, out of concern that the company's "rigorous technology" for detecting for trademarked words might not be sophisticated enough to determine the context in which words like zeta are being used.

Spring's spokesperson did not reply to that question.

"Unfortunately, the incentives for sites like Spring run in favor of being over-zealous with takedowns, because there's really no legal redress for users who have their work taken down when it shouldn't be, but the potential liability for leaving up designs that actually do infringe a trademark is quite high," said Mitch Stoltz, senior staff attorney at the Electronic Frontier Foundation, in an email to The Register.

"There are also a lot of misconceptions out there about what rights a trademark owner really has – a trademark doesn't give a right to stop others using a word in every circumstance, even on a commercial product.

"That's why a simple keyword filter will always catch too many things. The best solution may be a market solution: sellers of t-shirts and other crafts should choose platforms that promise to look out for their rights first, not the rights of massive brands." ®