This drag sail could prevent spacecraft from turning into long-term orbiting junk. We spoke to its inventors ahead of launch

Gadget due to be tested this week

Video Space-flight researchers are ready to test a prototype drag sail that could one day be used to prevent spacecraft turning into hazardous junk stuck for years in Earth's orbit.

Here's the gist: academics at Purdue University in the US have built a device they called Spinnaker3 that will be attached to a rocket developed by startup Firefly Aerospace and launched into space this week. When the upper stage of the rocket is spent, Spinnaker3 will unfurl its 18-square-metre drag sail, which is made out of fluorinated polyimide. 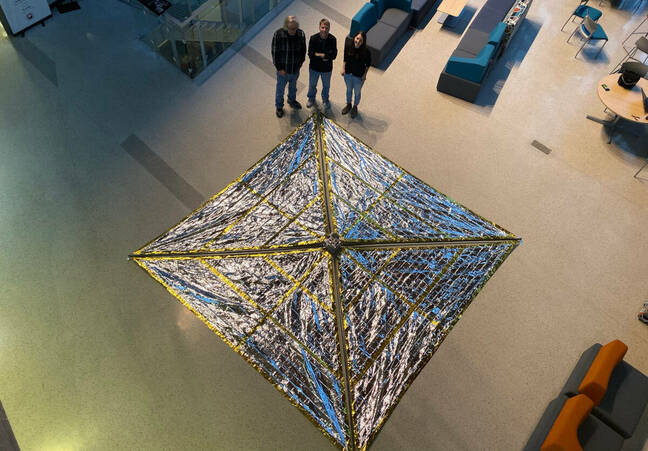 Drone view of the drag sail prototype, fully deployed in the atrium of the Neil Armstrong Hall of Engineering at Purdue. From left, Anthony Cofer, David Spencer, and Arly Black. Source: Purdue University
Click to enlarge

The sail will be held taut by three-metre-long carbon-fiber poles, which is the 3 in Spinnaker3. It's not the first drag sail in space, though crucially, it is big enough to slow the rocket stage by increasing its atmospheric drag. The rocket hardware is expected to deorbit and burn up in Earth's atmosphere in 15 days rather than 25 without the drag sail.

It may sound counter-intuitive, but hear us out: slowing down an orbiting spacecraft decreases the time taken for it to deorbit and burn up. It's possible drag sails could be used to destroy future spacecraft over far shorter periods of time, which reduces the chance of them whacking into other craft or debris and introducing more junk around our planet.

“The drag sail works by increasing the area of the spacecraft and therefore increasing the surface over which drag can act,” Arly Black, a PhD student at Purdue working on Spinnaker3, told The Register.

“Think of it like a parachute: a parachute simply increases your drag area. As such, any increase in the area-to-mass ratio of the body will act to slow down the spacecraft and bring it closer to Earth.”

This tech could be fitted to satellites and other craft so that when they are decommissioned or dying, they can be slowed so that they deorbit in a more reasonable time frame, reducing clutter. We imagine it could be a backup method for deorbiting, or an alternative to using onboard engines.

“Despite popular belief, there is not a pure vacuum around Earth, and the atmosphere has some density to it," Black continued. "While small, this density is enough to gradually slow down a spacecraft in its orbit, causing it to eventually spiral towards Earth.

“The rate of decay is dependent on a number of factors, including the altitude of the orbit and the area-to-mass ratio of the spacecraft. Density decreases as altitude increases, so the higher the orbit, the longer it takes for a spacecraft to deorbit.

"At lower altitudes, deorbit could occur in days, while at higher altitudes it could take tens to hundreds of years. At the rate that launches are occurring, letting spacecraft deorbit on their own over long periods of time will soon no longer be a viable option.”

Here’s a video illustrating how the drag sail works:

At 15 kilograms, the drag sail doesn’t add too much to the launch in terms of payload mass. Dave Spencer, an adjunct associate professor of aeronautics and astronautics at Purdue and founder of Vestigo Aerospace LLC, a startup producing drag sails for various sizes of space vehicles, told us he hopes to eventually bring down the mass to eight kilograms in the final, commercial version.

“Spinnaker3 is designed to operate even if the host spacecraft is inactive,” he told El Reg.

"This provides a failsafe approach to ensure that the space vehicle will deorbit in a timely fashion even if it fails prematurely."

It’s the first time the researchers have tested their invention on an actual rocket fuselage. They will watch Spinnaker3 in action via a camera placed on the upper stage of the Firefly rocket and will track how long it takes for the vehicle to deorbit from data provided by US Space Command.

The Firefly rocket is expected to launch on September 2 from the Vandenberg Space Force Base in California between 1800 and 2200 PT (0100 to 0500 UTC, September 3.) You can watch a livestream of the event here. ®

If we're going to go beyond the Moon, we'll need food, a way to build stuff, and health diagnostic technology
Science28 Nov 2022 | 13