Spraying a boot error up the bathroom wall

Taking the Pis in Paris

Bork!Bork!Bork! It is time for le Bork de Paris today as the curse of the cock-up fairy spreads beyond the shores of the UK to blight the Pis of France.

The example comes from longtime bork-spotter Alastair Craft and was snapped in what we suspect is the gentleman's private room within a Parisian café. 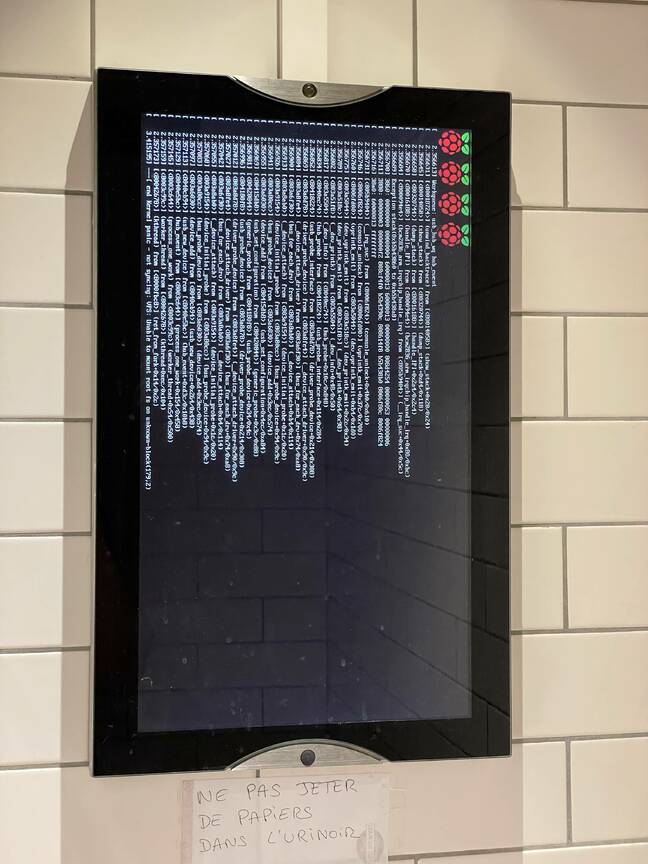 Rather than Windows disgracing itself on the neatly tiled wall, today's shame belongs to the Raspberry Pi, which has proven popular in recent years with those responsible for the digital signage inflicted on Joe Public.

Instead of having to choose between a poster showing a helpful reminder to wash one's hands, tips on where to secure the very best deals on car insurance or all manner of medical advice, using a digital sign means all three can be flashed via slide-show at an audience likely to be spending some quality time (depending on how much beer or coffee has been consumed beforehand) standing before the screen.

And yes, we do very much hope those are bolts at the top and bottom rather than webcams.

In this case the Pi behind the scenes is clearly not happy. Or, rather, the Operating System running atop the hardware is a bit distressed about its storage.

While we would not recommend turning one's head sideways to read the messages as one's, er, aim could be disrupted, it looks like something is amiss with the file system.

We've seen similar messages on our own collection of Pis. Usually it's a consequence of believing the claims from suppliers of suspiciously inexpensive SD cards that their wares will absolutely most definitely work with the Pi.

Other similar issues have been caused by voltage problems resulting in surprise writes to the SD card and an equally unexpected storage borkage.

In this instance, we'd recommend an optimistic reboot and, should that fail, simply popping in a freshly imaged memory card (or compute module.) After all, one of the joys of these device types is the inexpensive componentry compared to a full-on Windows install.

Still, even with the error sprayed up the wall of the facilities, it is at least reassuring to note that a nod to paper-based signage remains.

Nobody wants a blockage as well as a borkage. ®