Quietly adds that it hasn't yet received regulatory approval

Intel's Mobileye arm has announced a partnership with car rental giant Sixt to launch a fully autonomous robotaxi in Munich, showcasing the tech at the IAA Mobility conference this week – before admitting the platform won't open to the public until regulatory approvals are granted.

The brightly coloured vehicle showcased by Intel's Mobileye division – "I love the colour, love the car," chief exec Pat Gelsinger gushed during the Chipzilla's closing keynote – is, the company claims, a major milestone, and brings with it a new sub-brand: MoovitAV, used for Mobileye's commercial mobility services.

"This is the first production-grade fully electric self-driving vehicle by Mobileye, and it is capable of SAE level four full autonomous driving," claimed Johann "JJ" Jungwirth, Mobileye's vice-president for mobility-as-a-service, during a tour of the vehicle.

Today, [in] a premium car, about 4 per cent of the bill of materials is semiconductors; estimates by 2030 [say it'll go up to] 20 per cent... And you were worried about the semiconductor shortage today!

"This is the level four ECU [Engine Control Unit], automotive grade, with all the redundancy, everything that is needed, and it's fully developed and designed by Mobileye from the EyeQ SoCs, to the hardware, and to the software. The future is here." 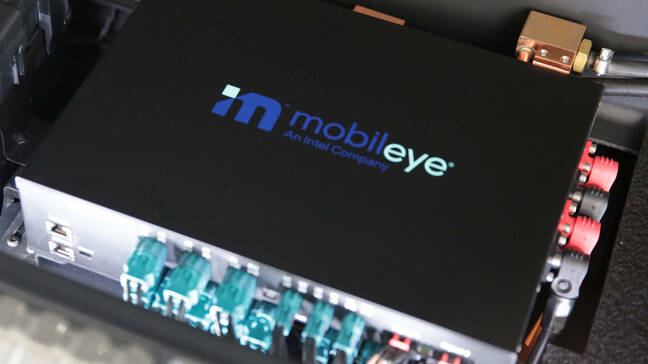 "The second layer is long range LIDAR sensors, using our partner Luminar and short range, flash LIDARs as well, on the body of the vehicle, and a few radar sensors that provide the second layer. Now, each layer performs independently, they do not rely on each other in order to get a redundant system."

While Gelsinger showcased hailing and riding in the MoovitAV as part of a pre-recorded video presentation, the two companies had to admit that it might be a while before the general public will be doing the same – as they have yet to receive regulatory approvals, a key sticking point which is holding up robotaxi services around the globe.

"In June Germany did pass the world's first regulatory framework for the safe and scalable deployment of automated vehicles," Jack Weast, Intel fellow, told attendees of the measures under which a planned Munich pilot programme will take place. "Importantly, it sets clear expectations on the roles and responsibilities of all the players deploying a level four automated vehicle."

"To begin with," Alexander Sixt, co-chief exec of the mobility firm which bears his name, claimed at the event, "Intel Mobileye and Sixt plan to operate a fleet of 100 per cent electric autonomous vehicles right here in Munich. Our consumers can hail their autonomous vehicle via the Sixt app and the Moovit app."

Well, at some point, anyway – but not yet, despite Germany's permissive law on the topic. "We [will] start with a pilot as early as next year," Sixt admitted to attendees at the very end of Intel's keynote presentation, "obviously commencing with an early rider programme – before we start our proper commercial operations after we get all the regulatory approvals. 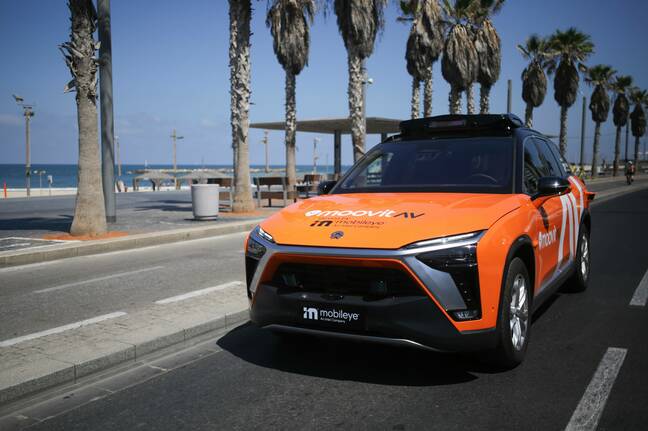 "I think the cooperation between Intel Mobileye [and Sixt] is truly a lighthouse project for Europe, where we can showcase first and foremost Intel Mobileye's technical capabilities but also ours, and I think this is the basis for further expansion in Germany, Europe, and possibly worldwide."

"So these driving assist systems are responsible of sending very low bandwidth data and to build maps on the cloud – and these maps are like gold, they let us drive anywhere in the world, but also tells us how humans actually drive."

Gelsinger also had something to say about the march of technology, and Intel's desire to be more heavily represented in what he predicts will be a future of "computers with tyres" in which 20 per cent of the bill of materials for high-end vehicles will be made up purely of semiconductors. The message to the automotive industry: you need to get with the times, a proclamation which has everything to do with the company's announced investment in European chip fab facilities.

"A new fab takes four or five years to build and have production worthy. Not an option to solve today's [chip shortage] crisis. Invest in the future, don't invest backwards. Instead, we should be migrating old designs on to new, more modern nodes, setting them up for increased supply and flexibility into the future.

Well, he would say that wouldn't he.

The full keynote video is available to replay on the Intel website. ®