Music festivals are back in the UK. So is the background bork

Stage fright? Or the knowledge that Windows is lurking behind you

Bork!Bork!Bork! Bork goes backstage today as the revival of music festivals in the UK heralds the return of background borkage.

On show is an example from Register reader Roffy, who was spending a sunny weekend taking in the delights of the Brixton Wide Awake Festival at London's Brockwell Park. 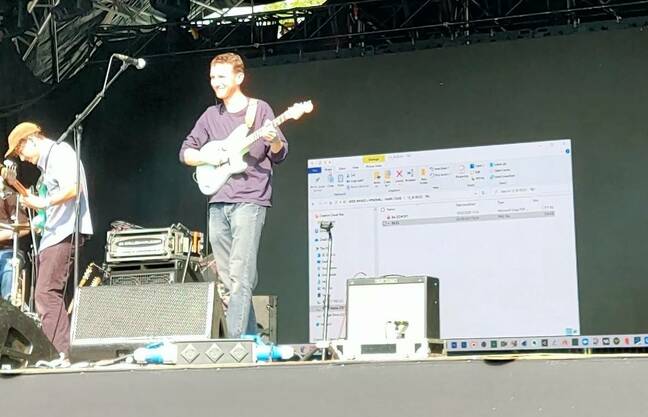 Can it really be more than two years since Windows XP flaunted its boot screen behind popster Neneh Cherry at Glastonbury? Indeed it can. In 2021, however, the version of Windows on display looks to be of a considerably more recent vintage. It would seem to be an accidental appearance, unless funksters Squid were seeking to play the ironic card with a broken PowerPoint presentation to accompany their set.

It is every AV tech's nightmare, and it's unclear if the intent was to open a file from a removable drive or if the wrong source button has been jabbed. Either way, we can but hope that no potentially revealing filenames were on show. At least the band (or festival) appears to have moved on from XP or Windows 7, judging by the style of the Explorer window.

That is, however, one impressively packed taskbar.

We contacted Squid's management to find out what the band made of Windows' impromptu appearance but have yet to receive a response. Possibly because this ever-so-square hack's idea of cutting-edge music is more along the lines of John Cage's 4'33".

As for Squid, the quintet's post-punk debut album Bright Green Field is rather good, even if the tracks draw from a variety of influences, like an overexcited toddler in a toy store.

Windows was eventually shunted to one side in favour of the band's name as the performance continued (in case the audience was wondering who was making all the noise). It's a shame, because while Squid is undeniably an impressive live act, we can think of other performers more suited to the unexpected appearance of Microsoft's finest. ®