This time it's... quite a bit faster

Good news for earthbound Pi-tinkerers hoping to get their code into orbit: a follow-up to 2015's Astro Pi is due to head to the International Space Station (ISS) this year.

Time has moved on a bit since the Principia mission of Tim Peake where the first units were installed aboard the orbiting outpost. While over 54,000 participants from 26 countries have since had code run on the hardware, the kit has fallen somewhat behind what is available on Earth.

To that end, some new units are due to be launched, replete with updated hardware. In this case, heading to orbit will be Raspberry Pi 4 Model B units with 8GB RAM, the Raspberry Pi High Quality Camera (a 12.3MP device) and the usual complement of gyroscope, accelerometer, magnetometer, humidity, temperature and pressure sensors for users to code against. 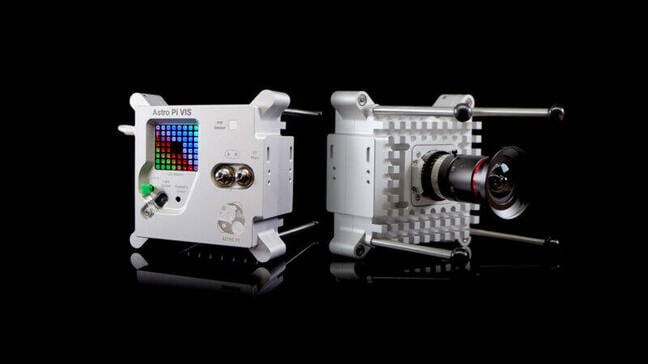 The augmented Raspberry Pi computers the RPi Foundation and ESA are sending up to the International Space station. Pic: RPi Foundation

Also joining the range of toys is a passive infrared sensor, a colour and luminosity sensor and a Google Coral machine learning accelerator.

It's an impressive set-up, with one unit deployed in a window aboard the ISS to potentially snap images of Earth, and the other set-up elsewhere in the laboratory. A relatively stock version of Raspberry OS will be running the show, although we understand the code has undergone plenty of security hardening and some other bits and pieces of custom software will be along for the ride.

Raspberry Pi supremo Eben Upton told The Register that many tweaks had been made post Tim Peake's mission to the ISS in 2015, telling us: "The upgrades to the flight hardware underscore how far we've come in performance terms since then: replacing a Raspberry Pi 1 with a Raspberry Pi 4, for a roughly 40x performance upgrade, and a first-generation 5 megapixel camera module with 2020's 12 megapixel HQ camera with detachable optics."

And the ride itself? Due to lift off from Florida as part of SpaceX's CRS-24 mission in December. While ESA astronaut Samantha Cristoforetti, due to take command the ISS in 2022, made the announcement, the units will arrive during the mission of fellow ESA astronaut, Matthias Maurer. Hopefully.

The original units have been there for a while now and we understand the batteries in the devices will expire next year, meaning that replacement is essential in order to keep the Astro Pi mission going.

Upton said: "This upgrade will allow students to design their projects on a modern Raspberry Pi, and have confidence it will run correctly on the station. The more powerful hardware, and the addition of an AI accelerator module, will broaden the achievable range of experiments, particularly in the area of AI, machine learning and earth observation. We can't wait to see what young people get up to with this platform."

The Pi 4-based units have been checked out as far as possible on Earth, since the new hardware is quite a different beast to the originals. Its electromagnetic emissions have been validated against what is acceptable on the ISS and the devices have also been through thermal testing: the Pi 4, after all, infamously ran a little warmer than its predecessor. Concerns over the increased density of the circuitry resulting in more errors have also been raised.

As for the missions themselves, there are two on offer. Mission Zero, which accepts simple Python programs that read a sensor and displays a message on the LED screen and Mission Space Lab, which is aimed at teams of young people seeking to run scientific experiments using the Pi hardware.

Mission Zero can be completed in around an hour and is open to anyone from 7 to 19 years old. As a bonus, as well as a certificate giving the location of the ISS and the time when the code ran, there is also the opportunity to name the devices.