Come for superlatives and executive enthusiasm, stay for the photographic enhancements

Apple on Tuesday announced iPhone 13, a "new iPad" and iPad mini, and Watch Series 7 at its "California streaming" event, held virtually again this year to avoid going viral in the wrong way.

The iBiz's latest shiny things arrived in the wake of a patch released Monday for its mobile and desktop operating systems to block a serious zero-click iMessage vulnerability and of protests outside Apple stores in major US cities to demand the company commit to abandoning its recently suspended plan to scan photos and messages on devices for child sexual abuse material.

Apple managed to shoot itself in the foot in the run-up to its product launch by announcing a child safety initiative based on using its customers' devices against them – a laudable goal that contradicted the mega-corp's privacy commitments and alarmed technical experts for its intrusive approach. The backlash prompted Apple to pause its CSAM scanning rollout and the protesters who took to the streets on Monday hope that pause will be permanent.

Adding reprimand to self-harm, a California judge last week ruled that Apple must allow app developers to link to third-party payment systems. Apple presenters during Tuesday's event made no mention of how the company plans to modify its developer rules to accommodate that decision.

On a happier note, the "new iPad" – for lack of a sensible iterative naming scheme – can be differentiated from older iPads by the inclusion of an A13 Bionic chip. It has a 10.2" Retina display and 12 MP Ultra Wide front camera. Available on September 24 in space gray or silver for $329 with 64GB of storage, or $299 in the education market.

It also has a USB-C port instead of a Lightning port, perhaps a result of EU efforts to push for standardized connectors. Its back camera is 12MP with f/1.8 aperture, capable of recording 4K video, and its front camera is a 12MP ultra wide variant. It starts at $499 and can be had in Wi-Fi and 5G cellular configurations. It's now available for order and should be in stores on Friday, September 24.

The iPad mini sports a A15 Bionic chip which features six CPU cores – two performance and four efficiency cores – that Apple claims provides 40 per cent better performance than its A12-powered predecessor. It also has a five-core GPU said to provide an 80 per cent improvement in graphics performance compared to the previous iPad mini. Then there's the 16-core Neural Engine and new ML accelerators in the processor, which should be able to run machine learning tasks twice as fast as the old iPad mini. 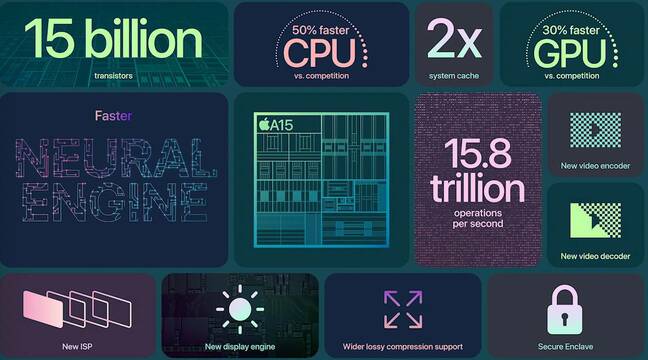 Apple's summary of the A15 chip ... Click to enlarge

Battery life for the iPhone 13 is said to be about 2.5 hours longer than on iPhone 12 due to software and hardware improvements. The iPhone 13 mini should get about 1.5 hours more than its predecessor.

Both sport a Wide camera with 1.7µm pixels, which Apple claims can gather 47 per cent more light with less noise than the previous generation. The camera incorporates sensor-shift OIS (optical image stabilization) that debuted in iPhone 12 Pro Max. Thanks to the processing power of the A15 chip, these phones can use Cinematic mode to record in Dolby Vision HDR, in 4K at 60fps.

The iPhone 13 and 13 mini (starting at $799 and $699, respectively) sport a Super Retina XDR OLED display (6.1-inch and 5.4-inch respectively), a Ceramic Shield front cover, storage that starts at 128GB, an IP68 rating for water resistance, and a 5G cellular support. Other configurations include 256GB and 512GB storage.

The iPhone 13 Pro and iPhone 13 Pro Max (starting at $990 and $1,099, respectively) incorporate a Super Retina XDR display with ProMotion, which provides adaptive refresh rate from 10Hz to 120Hz. It comes armed with three back cameras: Ultra Wide, Wide, and Telephoto.

The Wide camera on the two higher-end models has ​​a sensor with 1.9 µm pixels and ƒ/1.5 aperture and is said to provide 2.2x better low-light performance compared to the iPhone 12 Pro and 1.5x better than iPhone 12 Pro Max.

There are several computational photography enhancements – for example, the demonstration of Cinema mode showed how it can be used to pull focus in post-production from subjects in different depth planes. Like the smaller iPhone 13 models, both the 13 Pro and 13 Pro Max include sensor-shift optical image stabilization and Dolby Vision support.

Unlike the smaller models, the 13 Pro and 13 Pro Max will support ProRes later this year – Apple's high-end production video format. To accommodate higher resolution video, the Pro Max will be available with up to 1TB of storage ($1,599) as predicted. And an IP68 rating for water resistance will make it less of a disaster if you accidentally drop your 1TB phone into the toilet.

Preorders for these iPhones are available to customers in Australia, Canada, China, Germany, India, Japan, the UK, the US, and more than 30 other countries and regions, starting Friday, September 17, with availability planned for Friday, September 24. 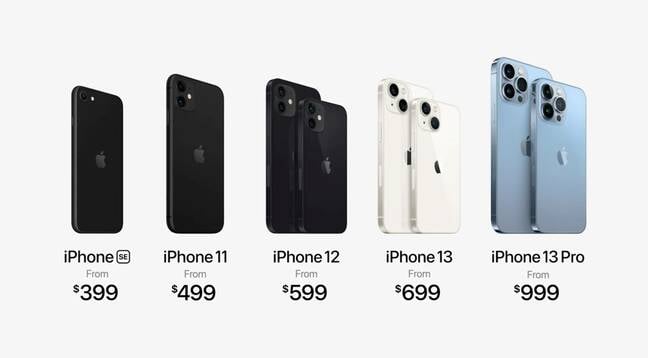 Apple Watch Series 7 starts at $399 and is coming later this fall. Its display is larger (~20 per cent more than Series 6) and its bezels are thinner (~1.7mm, 40 per cent less than Series 6). Available in midnight, starlight, green, blue, and product red, Apple's timepiece is said to be 70 per cent brighter indoors when your wrist is down, making it easier to check the time. It charges quickly – eight minutes of charging will get you about 8 hours of usage – but overall battery life remains unchanged, at about 18 hours.

The Series 7 includes new code to handle fall detection during bike rides and a better understanding of e-bikes so it can calculate calories burned more accurately when riding with electronic assistance.

Apple's latest mobile devices will come with iPadOS 15, iOS 15, or watchOS 8, as appropriate for the hardware.

Apple CEO Tim Cook presided over the "California streaming" event and helped supply the usual superlatives. He gushed over the "spectacular announcements," lauded the "phenomenal new iPad Mini," described the Apple Watch as an "indispensable companion," and called out the iPhone's "legendary ease of use."

We can affirm without reservation that "California streaming" was the best Apple event on Tuesday, September 14, 2021, of all time. ®