Too early to confirm ancient alien life, but a 'potentially habitable sustained environment,' though...

NASA scientists can breathe a sigh of relief now that Perseverance has successfully collected not one but two Martian rock specimens, after its first attempt to obtain and store a sample failed.

The plucky rover was sent to the Jezero crater to hunt for signs that Mars was once inhabited by microbes. Scientists believe their best shot at uncovering evidence of alien life are in ancient lake beds that used to support liquid water on the planet’s surface. But when Perseverance drilled into the rock for the first time, the material crumbled to dust and it was unable to stash anything useful in a sampling tube. 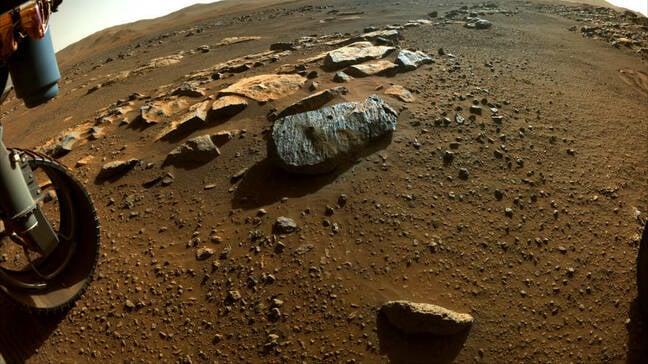 Luckily, Perseverance has many more of these tubes to hold samples. It attempted to bore into harder rock nicknamed Rochette last week, and managed to bottle up two samples this time. NASA has named them Montdenier and Montagnac. Although boffins on Earth won’t get their hands on them for many years, initial results support the idea that liquid water was sustained on Mars for long periods of time, possibly long enough for life to form.

“It looks like our first rocks reveal a potentially habitable sustained environment,” said Ken Farley, a project scientist working on the Mars 2020 mission and a professor of geochemistry at the California Institute of Technology. “It’s a big deal that the water was there a long time.”

The rock Perseverance drilled into is basaltic, a type of rock that normally forms when lava cools. Scientists believe the salts embedded in both samples were left over from when groundwater evaporated. It's possible the salts may have trapped tiny bubbles of liquid and hold secrets pointing to extinct microbes.

Scientists hope to use radiometric dating to estimate when the rock formed to get a better idea of when Mars supported water and how long the liquid lasted on its surface. “These samples have high value for future laboratory analysis back on Earth,” said Mitch Schulte, NASA’s mission program scientist. “One day, we may be able to work out the sequence and timing of the environmental conditions that this rock’s minerals represent. This will help answer the big-picture science question of the history and stability of liquid water on Mars.”

Perseverance will be probably be sent to South Séítah, an area 200 metres away from its current location, to collect more rocks. South Séítah is covered by interesting features, such as ridges, sand dunes, and boulders. Scientists believe the crater floor is older there, too, giving them an opportunity to piece together Mars' geologic history. ®