Vision from window seats didn't stream, everything else worked

SpaceX has successfully launched its first all-civilian crew into space.

The only glitch in the mission, dubbed Inspiration4 as a nod to the crew and its association with a hospital that specializes in childhood cancer, was a lack of video stream from the Dragon capsule after the cover of its transparent domed cupola was removed. The cupola was the big selling point of the mission and is essentially a huge window through which the four crew can enjoy the view from space.

Below is footage of the launch – you might want to skip to the 4 hour, 16 minute mark.

The launch from the Kennedy Space Center in Florida shortly after midnight UTC otherwise went off without a hitch. A Falcon 9 first-stage booster quickly carried a Dragon capsule to around 80km before the second-stage engine took over. A few minutes later the now-separated first stage touched down on a droneship and the Dragon capsule settled into a preliminary orbit at an altitude of 200km. 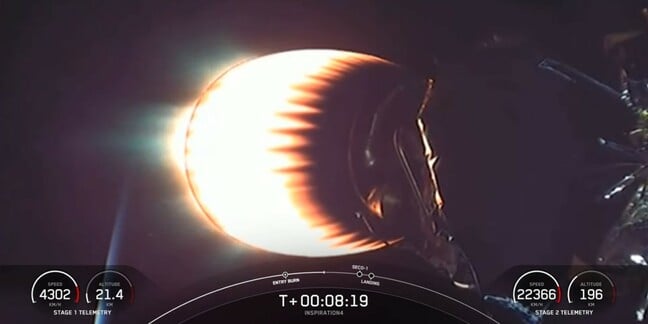 Live vision from the first-stage booster featured several disconcerting flashes – the result of short burns that presaged its return to Earth. Small objects sometimes moved past the booster, it seemed, without explanation.

The launch was the first-stage booster's third mission and the Dragon capsule's second venture into space, showing off SpaceX's philosophy of reusing components whenever possible to lower the cost of space travel.

The crew – Shift4 Payments boss Jared Isaacman, with Sian Proctor, Hayley Arceneaux, and Christopher Sembroski occupying the rest of the seats – all appeared excited during launch.

SpaceX's live stream of the event featured commentators gently pointing out that the mission was the first to feature an all-civilian crew and to send them into orbit. They also acknowledged that SpaceX stands on the shoulders of giants at NASA and elsewhere, meaning there was none of the billionaire vs billionaire sniping that accompanied the first crewed mission of Virgin Galactic's VSS Unity in July.

SpaceX doesn't need to fight with rival private space tourism operators over definitions of where space starts or whether its crew are astronauts, because Inspiration4 will reach an apogee of 575km and orbit for three days. Virgin Galactic's mission reached 85km in a trip that lasted 90 minutes, while Blue Origin's mission reached 101.7km and lasted just ten minutes and twenty seconds. ®

'The Essence of Repugnant Desire', selling via Boring Company website for $100, will accept Dogecoin
Offbeat12 Oct 2022 | 34