Japan, Singapore, perhaps the whole world.... Get ready for robot waiters from Softbank and Keenon

Automation is the answer to labor shortages, social distancing, apparently

SoftBank Robotics (SBRG) and China's Keenon Robotics are teaming up to make robot waiters the norm in Japan and Singapore, both companies announced on Monday.

Or “SBRG and Keenon Robotics will work together to expand the use of robotics systems in the service industry that will allow better efficiency and productivity,” as the pair put it in a canned statement.

While the bots won’t fully replace staff, the machines – which apparently can deliver up to four dishes at once – will assist their humans in carrying out food, thus freeing up staff to focus on customer service, the duo insisted.

Within the partnership, Keenon will supply the hardware, the Keenbot, which has obstacle avoidance abilities and other features to survive the dining room, it's claimed. SoftBank will provide cloud computing infrastructure to organize and control the gizmos. Its Vision Fund 2 also lately invested in Keenon.

The duo already has two major clients on board, we're told: the Uber-esque delivery food service super-app Grab, and Tong Lok Group, a restaurant group with locations across five Southeast Asian countries. Both are based out of Singapore, an area being targeted due to the city-state’s Smart Nation initiative fostering IoT, automation and interoperability across all manners of life including food and beverage, cleaning, hospitality, security, healthcare, logistics, and more. 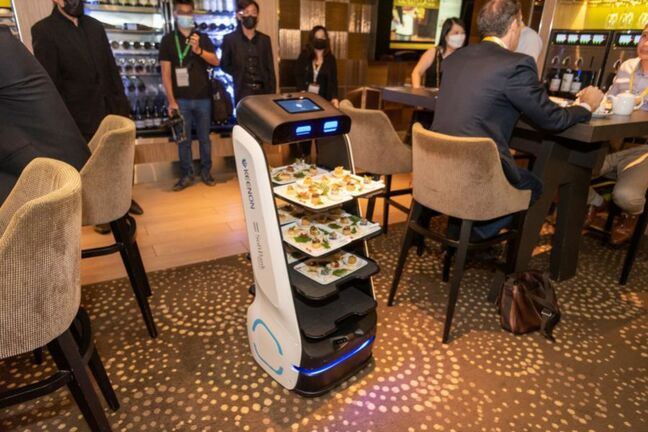 You got snail ... What one of these waiter bots is supposed to look like. Source: Keenon Robotics

Japan is also a target market, with the venture eyeing up the United States, Europe, and the Middle East next.

Grab and Tung Lok Group plan to use the robots differently. Tung Lok’s CEO Andrew Tijoe said his company will deploy the machines in eateries to combat labor shortages.

Grab will use the technology in its so-called cloud kitchen, a space it in which food is prepared for delivery via its app, to bring orders from the kitchen to the delivery driver. There is potential for further use as Grab’s cloud kitchen also has a small dine-in space, allowing the venue to also act as a food court. The superapp maker also plans to open 10 more cloud kitchens in the second half of 2021.

“We look forward to improving the agility of our operations and reduce repetitive and manual processes with the help of the robots. The robots will also enable us to better protect our Grabbers' wellbeing with the reduction of physical contact touch points," said Grab exec Yee Wee Tang in a canned statement.

Less physical contact indeed facilitates social distancing, which is needed in today’s COVID world. But another very real effect of the coronavirus has been a labor shortage in the restaurant industry, the reason varying by location as each individual country manages the bio-nasty differently.

In the US, all manner of effects have led to a shortage, from clampdowns on immigrant workers to some Americans just not wanting to go back to work for various reasons. According to the Straits Times, border closures and tightening laws on employing foreigners has led to a 20 to 30 percent shortage in restaurant staff in Singapore.

The reliance on automation in this case aligns with a recent study that found business adoption of robots and other forms of automation is largely driven by labor shortages, and in particular aging populations, a demographic challenge Singapore and Japan both face.

In the past, Keenon robots have been deployed for restaurants, hotels, hospitals, government offices, elder care facilities, banks and airports. But Keenon isn’t the only one in the business. This past April, South Korea Telecom (SKT) linked up with Yongin Severance Hospital to commercialize and deploy facility-roaming robots that minimize the need for face-to-face contact, thus supporting reduced COVID transmission. ®