Back from the brink with new features

The Linux display server remains widely used despite the introduction of Wayland, first released in 2012 and intended to replace X.

The future of the software, in terms of significant new releases, was in doubt when project owner Adam Jackson declared the project "abandoned" last year, but Lithuanian developer Povilas Kanapickas (who formerly worked on the Unity game engine) stepped up and said:

"There are new features in the Xorg DDX that I would like to see released, so I'm volunteering to do the releasing work."

XWayland, a compatibility piece that enabled X clients for Wayland display servers, is part of the X.Org project but in December maintainer Michel Dänzer proposed that "there are new Xwayland features that we'd like to ship to users. Since there's currently no clear plan for a new major release of xserver as a whole, I'm volunteering to make releases of Xwayland only instead."

This was met with approval, and in March there was a standalone release of XWayland 21.1.0. Kanapickas considered this separation "good practice" and therefore the new release candidate is X.Org-only. 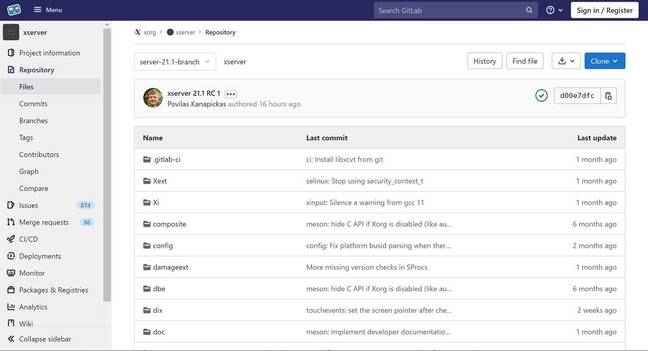 Work is proceeding on the 21.1 release of X.Org Server

Wayland use is increasing and it is the default in popular distributions including Fedora, Red Hat Enterprise Linux, and Debian. Ubuntu switched to Wayland as the default in version 21.04, a second attempt since it was default in 17.10 but reverted to X.Org for 18.04, which means that the current LTS edition, 20.04, remains on X for most users.

The same applies to distributions such as Linux Mint, based on Ubuntu LTS. Even where Wayland is the default, some users prefer to run X for compatibility or performance reasons.

The new release candidate includes variable refresh rate support, support for AMD GLAMOR acceleration in the Xvfb (X virtual framebuffer), touchpad gesture support, and correct reporting of display DPI "in more cases that may affect rendering of client applications on hi-DPI screens." There is also full support for the Meson build system and the older autotools support will be dropped in future releases. Kanapickas has also helpfully listed all the fixes since version 1.20.0 which is a long list.

While many users will welcome a new X Server release, Jackson observed last year: "I'm of the opinion that keeping xfree86 alive as a viable alternative since Wayland started getting real traction in 2010ish is part of the reason those are still issues." ®