Imagine an optic fiber that can sense the presence of a nearby jackhammer and warn its owner that it is in danger of being dug up, just in time to tell diggers not to sink another shaft. Next, imagine that an entire city's installed base of fiber could be turned into sensors that will make planners think twice before installing IoT devices.

Next, stop imagining: the tech is real, already working, and was yesterday used to demonstrate the impact of an earthquake.

As explained to The Register by Mark Englund, CEO of FiberSense, the company uses techniques derived from sonar to sense vibrations in fiber cables. FiberSense shoots lasers down the cables and observes the backscatter as the long strands of glass react to their environment.

"Vibration and sound all modulate strain in fiber," Englund explained, adding that even deeply buried fibers react to vibrations and sound. FiberSense has figured out how to measure changes in a fiber and deduce what made them.

The company can therefore detect things like passing traffic with sufficient accuracy to determine the difference between a truck and a cyclist, speed of travel, and even what lane a vehicle used. Leaky pipes can also be sensed, as can the geotechnical profile of spoil beneath fibers. Backhoes and jackhammers are easy.

Earthquakes can be measured, too. Yesterday the Australian city of Melbourne experienced a magnitude 5.9 shake. FiberSense backer Bevan Slattery shared the image below depicting its tech in action: the darker segments of line show where ground acceleration was highest during the 'quake. 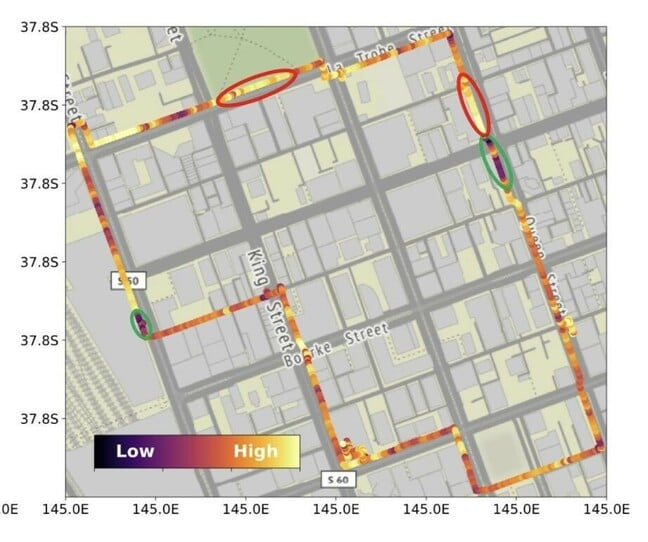 Vibrations in optic fiber detected by FiberSense during an earthquake.
Click to enlarge

At sea, FiberSense can detect an anchor dragging behind a ship – which matters when those anchors are about to pass over a submarine cable (as recently happened off the Australian city of Perth, resulting in a cable cut, a subsequent outage, and the arrest of the errant ship's skipper).

FiberSense sends its lasers and measures strains in fiber with a 3U box it installs in big metro datacentres – locations the company favours because they're a de facto nexus point for a city's fiber networks.

Each unit FiberSense installs can monitor 200km of fiber and host 20,000 virtual sensors. Each sensor can be configured as a hydrophone, microphone, or whatever other vibration sensor customers require.

Many cities already possess colossal fiber installations and have ambitions for "smart" applications that use myriad sensors to help authorities provide better management. Englund told The Register he sees those aspirations hit the wall once authorities confront the cost and complexity of deploying sensors and building networks to connect them.

The CEO thinks FiberSense can offer a different way to get smart by tuning into the good vibrations of a city's fiber networks. He even thinks his tech could cool current passions for edge compute, because when fibers are used as sensors the need for micro-datacentres to aggregate IoT sensor traffic shrinks.

This is not just a vision thing: FiberSense is already present in several Australian cities, plus London, Dublin, San Francisco, New York, and Singapore.

In London, Englund sees water leak detection as a huge opportunity, citing recent reports the city's Victorian-era pipes leak 500 million litres a day. In Australia, the company is set to reveal its tech has been deployed to monitor a traffic black spot in the hope of reducing future accidents.

The Australian traffic monitoring gig is a rare example of FiberSense installing its own fiber – an option it can pursue as needed and prefers to accomplish using "pico-trenches" that offer a quick and cheap way to bury fibers at a shallow depth and a fraction of the cost of carrier-grade connections that pass through pits and pipes.

FiberSense aims to operate as-a-service - it will install its kit in datacentres and exchanges, then provide a platform telcos can rebrand, or end-users can consume. The company also operates cloudy analytics tools to do the detection and has staff who specialise in interpreting vibrations for different applications.

Englund said his goal is to shrink FiberSense's tech to the point at which it can be deployed ubiquitously alongside street-level telco infrastructure. The company's already reduced its kit from 18U to 3U, and the CEO thinks miniaturisation will make very small units possible in future.

And once cities are wired with sensors without having had to wire in many more sensors, the real fun starts. ®