Because HPE does not do public cloud? No, no, it is 'for the good'

Comment Hewlett Packard Enterprise has posted a "UK Public Sector Manifesto" with nine themes, alongside a campaign hyping the value of hybrid cloud.

The bugbear for HPE is that UK government introduced a "cloud first" policy in 2013.

The current version was revised in 2017 but it mandates that central government, when buying new IT services, must consider a cloud solution – and specifically a public cloud, rather than "a community, hybrid or private deployment model" – before any other option.

Departments remain free to choose non-cloud solutions but only if they can demonstrate that it is better value for money. 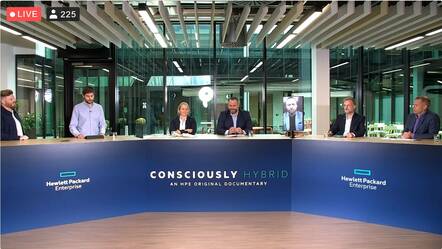 HPE, whose business is largely on-premises - following a biref flirtation with public cloud that ended in early 2016 - argues the cloud-first policy has been unsuccessful and the "policy placed too much focus on 'where' data and workloads should be hosted as opposed to 'how' and the desired outcomes."

The campaign includes a film (directed by Daniel Tremayne-Pitter, a "behavioural strategist" for his company Dark Matter) as well as a report. It used a Freedom of Information request to discover that "63 per cent of organisations still do not have a dedicated cloud strategy."

According to HPE, departments have attempted lift-and-shift (simply moving legacy applications to the cloud without attempting to redesign them) and discovered that compliance, security, and compatibility make "public cloud only" non-viable.

HPE claims that more than 70 per cent of public-sector IT infrastructure and 73 per cent of data remains on-premises, and would like to see "cloud first" replaced by a conscious policy embracing hybrid computing, where on-premises workloads intermingle with cloud solutions. Hence the name of its campaign, "Consciously Hybrid."

Since "cloud first" already allows for non-cloud deployments when justified by cost, the difference is not as great as it first appears, but HPE may feel that government policy has handed the US public cloud giants a marketing advantage in their public-sector pitches, such that it has to work harder to make a case for its on-premises solutions.

When former Ministry of Justice technology professional Steve Holt said in the recording that "there is a terrible waste of public money" in government IT, that is easy to believe. Is this anything to do with the cloud-first policy? In the film and paper, HPE failed to prove its point, and listening to some of its arguments felt like going back in time, to the early days of cloud when there was more anxiety about using shared computing resources than there is today.

HPE claims the efficiency of public cloud is a mirage. Public-sector advisor Russell Macdonald said: "By definition, hyperscalers are hyper scale. And so there are hundreds of thousands and millions of servers running all of the time. Whether you're using them or not."

It is of course possible to over-provision cloud services but this statement seems to miss the point that hyperscale providers can in principle achieve greater utilisation rates than on-premises.

AWS, as you would expect, takes a different view, referencing a 2014 survey by the US Natural Resources Defense Council estimating "cloud server utilization at 65 per cent and on-premises utilization running 12 to 18 per cent," a huge difference, especially in the context of environmental sustainability.

HPE made the valid point that pressure from cloud companies to reserve capacity to reduce costs versus pay-as-you-go prices makes over-provisioning more likely, but cloud still offers many possibilities such as auto-scaling and serverless computing that do not exist in the same way on-premises.

An online press Q&A at the film's online premiere was run by HPE, where we asked about server utilisation on-premises compared to public cloud, but the company chose not to answer in a carefully choreographed session.

HPE also said that "cloud technology can be delivered anywhere," meaning that some aspects of cloud computing, including automation, self-service, virtualization and containers can be implemented on-premises such as through the company's GreenLake services. Nevertheless, a GreenLake installation is not equivalent to AWS, Azure or GCP, even if it has a subset of their features.

The NIST cloud model specifies multi-tenancy, rapid elasticity, and the fact "the consumer does not manage or control the underlying cloud infrastructure" as essential characteristics of cloud, excluding on-premises deployments. The interesting questions about something like GreenLake are about the trade-offs, what is gained and what is lost.

Another matter not explored by HPE for obvious reasons is that smaller suppliers and cloud providers can sometimes offer better value than the big three cloud providers, or indeed HPE GreenLake.

There is a case to be made for hybrid cloud, or not using cloud, and not just that legacy technology is hard to migrate. Digital sovereignty? Over-reliance on a few US service providers for key services? The price premium for renting rather than owning IT resources? HPE did not make that case well, relying too much on vague generalisation and presenting little hard data.

Still, the Consciously Hybrid campaign makes more sense than the bizarre For the Good "manifesto" that the company has also unveiled, in which it promises to be ethical in its dealings with the public sector – as if, without such a manifesto, we could expect otherwise?

HPE promises "an agnostic approach to public cloud," but we should not expect the company ever to advise a pure public cloud solution since it "champions building… hybrid infrastructure."

In sustainability, HPE said it "has committed to be a net-zero enterprise by 2050." That is nearly 30 years in the future; it does not seem ambitious to us. Google, for example, claims to be "carbon neutral since 2007. Carbon free by 2030." Microsoft says it will be carbon-negative by 2030.

AWS says it wants "to reach net-zero carbon emissions by 2040." By these standards, HPE's "for the good" is not good enough. ®