Updated It wasn't only eager fanbois awaiting their Apple deliveries last week - teardown terror iFixit also got its hands on the iPhone 13 Pro and did what it does best.

Prising open the phone in a similar way to the iPhone 12 Pro revealed a worryingly flimsy combined digitiser and display cable, and an L-shaped battery. 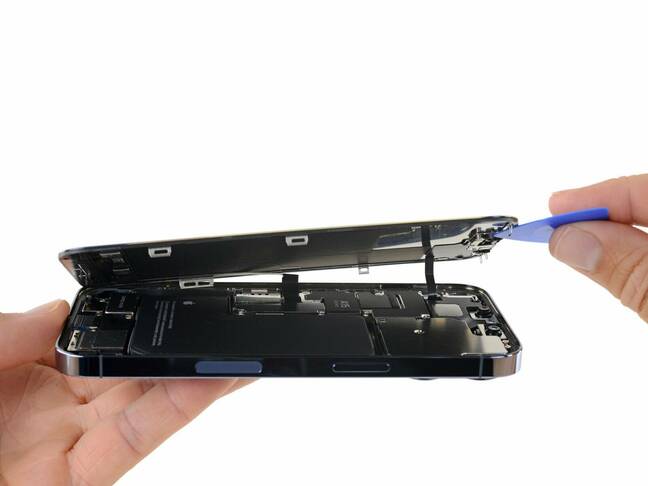 Still swappable, and therefore yet to be placed on Apple's list of components tied to the phone (despite a warning message), iFixit reported 11.97Wh from the battery, up from the 10.78Wh of the 12 Pro's rectangular unit. This is, however, down on the 12.54Wh of the standard iPhone's power pack, something the team attributed to the power-sipping habits of the Pro's screens.

The stretch-release adhesive made extracting the battery relatively straightforward, once the loudspeaker and heftier Taptic Engine (now 6.3g – up from 4.8g) were out of the way.

The earpiece speaker is no longer on the back of the display (making for easier screen replacements) and instead inside the chassis, necessitating a logic board extraction in order to change out the part.

iFixit also noted the narrowed notch (which remains as annoyingly tall as ever) and the cameras, "noticeably beefier than the 12 Pro's array," but pretty much the same as the 12 Pro's to the average observer.

"How will people know you've upgraded now?" asked iFixit, going on to suggest... "Maybe you should just... not?"

Updated on 28 September to add:

Going deeper into the device, the team pulled out the logic board containing silicon such as Apple's A15 SoC, as well as the company's U1 ultra-wideband chip and power management ICs among others.

It also made a slightly unpleasant discovery. The flood illuminator, a required bit of Apple's Face ID technology, has been moved from the display to a new module. Initially one might think this is good news: Face ID swaps should be a breeze, right? Alas no… "any display replacement knocks out Face ID" according to iFixit, making repairs outside of Apple's walled garden a definite no-no.

The result is a drop in the repairability score to 5 out of 10 from the 6 of the iPhone 12 Pro.

Sure, replacing the display and battery remain doable, and screws rather then excessive gobs of glue make things easier. But "software component pairing needlessly complicates many repairs," observed the team ruefully.

And going down the third party route, where Apple's special tools are not on hand, could leave a device missing functionality after a repair.