Mac OS X at 20: A rocky start, but it got the fundamentals right for a macOS future

Two decades ago this week, the first version of Mac OS X hit shelves. We're not talking figuratively. The software was sold direct to consumers on disk, with a suggested retail price of $129 (roughly $190 today, adjusted for inflation).

Back in 2001, Mac OS X 10.00 Cheetah was a rough-around-the-edges break from the ageing Classic Mac OS, which had much of its origins in the original Macintosh’s System 1 software. In the years since, the platform has undergone two architecture shifts (PowerPC to Intel, and now Arm) and matured to the point where it commands nearly 10 per cent of desktop market share globally.

Getting there, however, wasn’t easy.

From big problems to big cats

The story of Mac OS X didn’t start in 2001, but rather in 1985, when Steve Jobs was ousted from Apple following a failed boardroom coup, and multiple product flops. The Apple Lisa project was a dismal failure, selling just 10,000 units. The Macintosh, although infinitely more successful by comparison, failed to slow the ascent of IBM in the PC market, and didn’t meet the company’s lofty sales goals.

Although Jobs was no longer part of Apple, he remained involved in the computer industry, later founding NeXT Inc, which aimed to build workstation-class machines for the higher education market. Its first computer, revealed in 1988, was a powerful (albeit excruciatingly expensive) cube of black aluminium based on a 25MHz Motorola 68030 CPU and 68882 FPU, with 8MB RAM and an optional 330MB or 660MB hard disk. It came with a bespoke UNIX-based operating system called NeXTSTEP that was founded on the Mach and BSD kernels, with object oriented programming principles throughout.

It was revolutionary, but that wasn’t enough to overcome its steep $6,500 ($14,500 in today’s money) asking price. Universities didn’t bite – although the hardware was used to develop the first web browser and server, as well as id Software’s Doom and Quake. By 1993, NeXT had left the hardware business to focus on porting NeXTSTEP to IBM-compatible PC, as well as PA-RISC, SPARC, and the Motorola 68k architectures.

Apple had its own problems, too. The Macintosh was stagnating. Windows 95 – which combined the previously separate DOS and Windows software – proved to be a roaring success, helping Microsoft expand its market share. When it arrived in 1995, Windows 95 was highly usable for first-time computer owners, and had features Mac OS 7 simply lacked, like preemptive multitasking. Separately, a disastrous decision by then-CEO Michael Spindler to license Mac OS 7 to third-party manufacturers resulted in the company’s high-margin hardware sales shrinking further.

By 1997, Apple was mere weeks away from bankruptcy. As a Hail Mary, CEO Gil Amelio (who replaced Spindler in 1996) acquired NeXT, bringing Jobs back to the company he founded from a Los Altos garage. While Jobs (who would assume the top role the following year) would ultimately nurse the company back to health, Apple was most interested in the NeXTSTEP operating system.

You see, Mac OS was, at the time, stagnant. Whereas Windows had made leaps and bounds in terms of things like peripheral support and the internet, Apple had yet to implement basic system-level features like pre-emptive multitasking, multithreading, and protected memory. During the Amelio years, Apple had attempted to create a new operating system on a clean-sheet kernel called Nukernel, but it died in the fiery pits of development hell.

With Jobs at the helm, work started on a new operating system based on NeXTSTEP. The old Mac OS 9 nanokernel was replaced with Darwin, itself a direct descendant of the NeXTSTEP kernel. Other NeXT features - like the use of object-oriented programming, the Objective-C language, and the Dock - also made an appearance. It was a clean break with the past, with a brand new interface dubbed Aqua, and APIs that would allow developers to port their existing software. 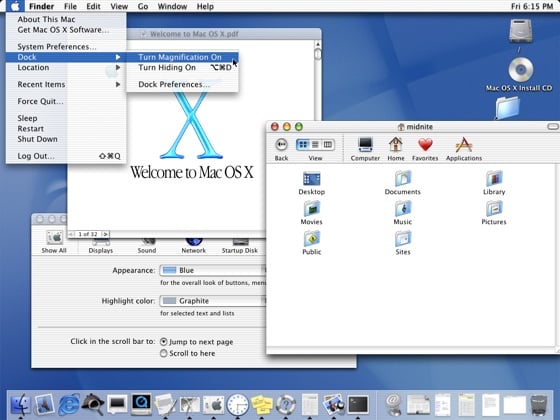 This, ultimately, became Mac OS X 10.00 Cheetah. And while its legacy continues to this day, the initial launch was somewhat underwhelming. It lacked feature parity with Mac OS 9, with DVD playback and CD burning unavailable at launch. Despite the release of a public beta, many developers (including Microsoft and Adobe) hadn’t updated their software to use the Aqua APIs. And it was dog slow, particularly when running applications using the backwards-compatible Classic APIs.

Worse, while many had hoped the Unix foundations and protected memory of Mac OS X would improve stability when compared to its predecessors, the software was rife with fatal bugs, which frequently presented themselves when using external peripherals.

The road since travelled

Teething problems with Mac OS X Cheetah didn’t stop Apple’s upward trajectory, and many of these issues were resolved in later releases. The next release, Mac OS X 10.1 Puma focused on performance improvements and improving feature parity with the Classic Mac OS, and was offered as a free update to existing users.

The next major update came in 2002. Mac OS X 10.2 Jaguar fixed the long-standing issues with printer support through the release of CUPS – the Common Unix Printing System – which was subsequently open-sourced and is now widely used across the Linux sphere. By that point, Apple was so confident in Mac OS X, Jobs performed a mock funeral for the Classic Mac OS X on stage at the company’s Worldwide Developers Conference.

At the time, Mac OS X was exclusively available for the PowerPC platform. By the decade’s halfway point, it was struggling to compete with chips from Intel in key metrics like power consumption. IBM, which built PowerPC chips on behalf of Apple, was manufacturing on larger nodes than those used by Intel, which was already transitioning to 65nm. Whereas it once enjoyed a competitive edge in processing power, Apple was faced with the prospect of losing that advantage.

And so, in 2005, Apple announced the transition to Intel, starting with Mac OS X 10.4.4 Tiger. This had been on the cards for some time. For each version of Mac OS X released, Apple had secretly created an x86 port, so there wasn’t much re-architecting required internally.

Apple had flirted with a move to Intel in the past. Rhapsody OS, which later became Mac OS X Server 1.0, was released for both PowerPC and x86, with versions for IBM RISC System/6000 and DEC Alpha architectures considered. Additionally, the foundational basis of Mac OS X, NeXTSTEP, was also available for Intel processors. This preparation and experience allowed Apple to recognise the writing on the wall and pivot.

As transitions go, the shift to Intel was as painless as could be, especially compared to the jarring leap from Mac OS Classic to Mac OS X. Legacy apps were able to run via the Rosetta compatibility mode (which was later discontinued in 2012). Developers could target both PowerPC and Intel platforms with universal binaries. And Apple offered developers a rental “transition kit” ahead of the public launch, giving them a head start.

In retrospect, this experience informed Apple’s next platform shift, with the company moving from Intel to its own Arm-based Apple Silicon processors in 2020. It has used the same playbook, down to the developer tools and pre-release transition hardware.

In the two decades since the launch of Mac OS X, a few things have changed. Objective-C is declining in popularity, with Apple’s syntactically nicer Swift programming language gathering pace. The name changed a few times too, with Apple re-branding the system OS X in 2012, and finally macOS with the launch of version 10.12 Sierra. We’ve seen the launch of the Metal graphics API, which provided better rendering performance for games and other visually-intensive apps, as well as the inclusion of iOS and iPadOS features, like Siri.

But the foundations first introduced in 2001 are still there, from the UNIX underpinnings to the NeXTSTEP Dock. While Windows has undergone multiple UI changes, macOS has largely remained mutually intelligible with its predecessors. As a collector of retro Apple kit (your correspondent has around 30 machines, ranging from a Mac OS 7-era Performa, to various post-Jobs PowerBooks and iBooks), it’s amazing to see how little has changed. I can use an iBook G4 running Mac OS X 10.3 Jaguar and feel just at home as I would with a latest generation M1 MacBook Air.

And that is the story of Mac OS X. It didn't seem like it would make it, but getting the fundamentals right – dare we say it even more than the cult of Steve Jobs – matters. ®