Before you call it dumb, take a look at its biological counterparts on this planet

Robots with Intel Inside brains? That's what Chipzilla has in mind with its Loihi 2 neuromorphic chip, which tries to mimics the human brain.

This is Intel's stab at creating more intelligent computers that can efficiently discover patterns and associations in data and from that learn to make smarter and smarter decisions.

It's not a processor in the traditional sense, and it's aimed at experimentation rather than production use. As you can see from the technical brief [PDF], it consists of up to 128 cores that each have up to 8,192 components that act like natural spiking neurons that send messages to each other and form a neural network that tackles a particular problem.

The cores also implement the synapses that transmit information between the neurons, which can each send binary spikes (1s or 0s) or graded spikes (32-bit payload value). 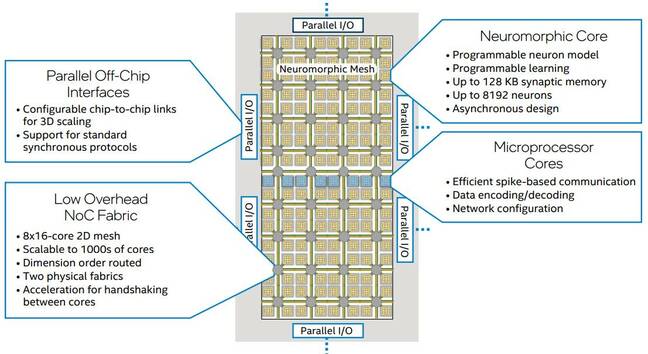 An overview of the Loihi 2 chip architecture ... Source: Intel. Click to enlarge

Each neuron can be assigned a program written using a basic instruction set to perform a task, and the whole thing is directed by six normal CPU cores that run software written in, say, C. There's also external IO to communicate with other hardware, and interfaces to link multiple Loihi 2 chips together into a mesh as required. There are other features, such as three-factor learning rules, that you should see the technical brief for more details. The previous generation didn't have graded spikes nor programmable neurons. 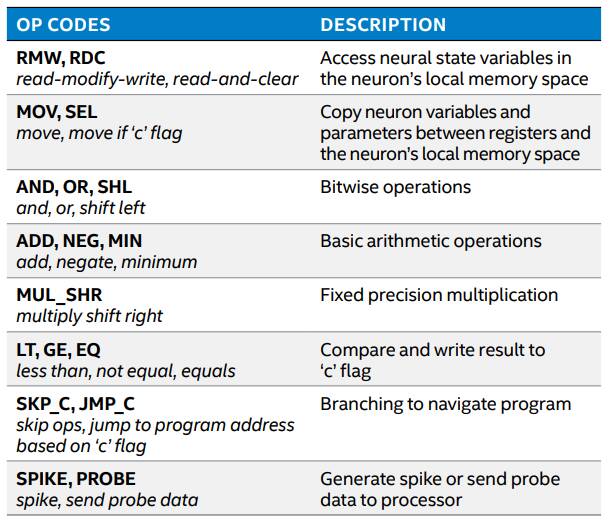 The 'highlights' of the Loihi 2 per-neuron instruction set ... Source: Intel. Click to enlarge

There's a race to replicate the brain electronically to run powerful AI applications quickly and without making, say, a massive dent in the electric bill. Samsung just said it wants to put human-like brain structures on a chip. IBM is also developing hardware designed around the brain.

Intel's latest Loihi is ten times faster than the previous-generation component announced four years ago to this month, it is claimed.

"Loihi 2 is currently a research chip only," said Garrick Orchard, a research scientist at Intel Labs via email with The Register. "Its core-based architecture is scalable and could enable future flavors of the chip — when the technology matures — that could have a range of commercial applications spanning data center to edge devices."

Each Loihi 2 chip has potentially more than a million digital neurons, up from 128,000 in its predecessor. To put that in context, there are roughly 90 billion interconnected neurons in the human brain, which should give you an idea of the level of intelligence possible with this hardware right now.

The digital neurons compute asynchronously in parallel, and can be customized by their programming. Loihi 2 supports a maximum of 120 million synapses, compared to over a trillion synapses in the human brain, and has 2.3 billion transistors in a 31 mm2 die area. According to Intel, its digital circuits run "up to 5000x faster than biological neurons."

The chip is an early sample of the Intel 4 manufacturing node, which is the semiconductor giant's brand name for its much-delayed 7nm process node, and uses extreme ultraviolet (EUV) to etch the chips. Loihi 1 was made using a 14nm process.

"With Loihi 2 being fabricated with a pre-production version of the Intel 4 process, this underscores the health and progress of Intel 4," an Intel spokeswoman told us.

Intel, by the way, showed off the wafer of Intel 4 CPU family, code-named Meteor Lake and aimed at desktops and mobile PCs, at a press event in July, the first time it had done so. Chips using that microarchitecture are expected to ship in 2023, hence Loihi 2 is a glimpse of what's to come manufacturing-wise.

Intel is working with the research community to come up with applications for Loihi 2. Its predecessor was used to create systems to identify smells, manage robotic arms, and optimize railway scheduling.

There are no projects underway with Loihi 2 yet, though partners that worked with the original Loihi "have communicated their excitement for new capabilities within Loihi 2," Orchard said.

One such partner is America's Los Alamos National Laboratory, which is using the first-gen Loihi chip as an artificial brain to understand the benefits of sleep.

An open-source programming framework called Lava was introduced alongside Loihi 2 with which developers can write AI applications that can be implemented in the chip's neural network. The underlying tools will also support Robotic Operating System (ROS), TensorFlow, Pytorch and other frameworks.

The Lava framework is available for download on Github.

Our friends over at The Next Platform have more analysis and info on Loihi 2 right here.