Fairphone, an outfit that uses only ethically sourced materials and regulated labour to make smartphones, has revealed a new model of its flagship handset and started selling wireless earbuds too.

The earbuds don't offer the ability to replace components – a clear differentiating feature of Fairphone's handsets. But as a nod to the fact that wireless buds from the likes of Apple are considered impossible to repair – which means replacing batteries is out of the question even though they degrade to the point at which AirPods are all but useless after two years of regular use – Fairphone has come up with battery-extension tech to stop its own efforts quickly ending up in landfill.

The outfit hasn't explained it in detail, other than to state "By adapting the charging speed of both the charging case and the earbuds, we're confident that our True Wireless Earbuds will last twice as long."

Fast chargers for smartphones are widely held to decrease battery capacity over time, because they heat batteries as they charge. While such chargers don't push LiIon to dangerous temperatures, extra heat accelerates internal chemical changes that reduce the charge batteries can store.

If slower charging is Fairphone's tactic, it may be problematic. Its disappointingly-named "True Wireless Stereo Earbuds" pack 45mAh batteries – less than half the capacity found in Apple's AirPods according to teardown artists. Fairphone's 500mAh charging case may beat Apple's to a full charge, but running out of tunes in the middle of a run will tick customers off, regardless of the environmental benefits.

Android 11 does the driving, and a 3905mAh battery keeps the lights on. Two SIMs are standard – one physical, the other an eSim.

USB-C is provided for charging and the sole physical connection to the world. NFC can handle transactions, but not wireless charging.

Two variants are offered: one with 6GB of RAM and 128GB of storage, the other with 8GB and 256GB. A Micro-SD slot can bulk up storage by two terabytes. Fairphone has given the new machine a five-year warranty and promised six years of software updates. 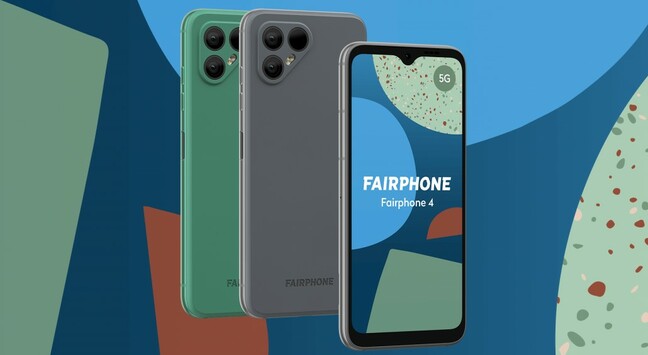 Components are already on sale for the model 4, and Fairphone says the cameras, speakers, cases, and USB-C port it sells can be installed by anyone capable of wielding a standard screwdriver. Replacing the removable battery is also a snap.

The devices make extensive use of recycled materials, Fairtrade-certified gold, and workers involved in the machines' production are paid living wage bonuses. Fairphone says it's made the new model "electronic waste neutral" because for each unit sold "we responsibly recycle or give one old phone a second life".