I fought the bork and the bork won

Bork!Bork!Bork! With travel restrictions set to ease, bork has skipped lightly across the Atlantic after a brief sojourn in France and into the New York Civil Court, where the long arm of the law appears unable to reach Ctrl, Alt or Delete.

Today's image was sent in by a reader Regomised as "Aziz" and features a very unhappy information board in New York's Civil Court. While there is no taskbar visible, we reckon the recycle bin icon puts things at around Windows 10.

As well as insisting that his presence in the building was not the result of nefarious activities, Aziz told us the signage usually showed a digital directory of the building.

Sadly, the only directory visible here is one that Media Player is unable to connect to, judging by that System error 53. Quite why one would want to use Windows Media Player when VLC appears to be present is anyone's guess. Presumably the administrator prefers the orange circle and white arrow icon of failure associated with Windows Media Player to the cheery traffic cone of VLC. 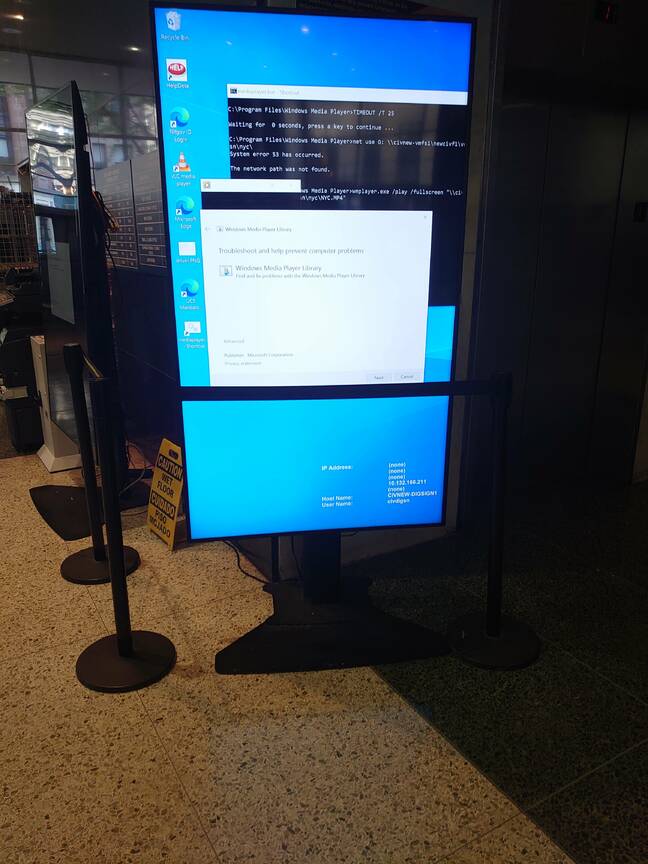 We can only imagine the delights contained within NYC.MP4.

Windows Media Player has long been a mainstay of Microsoft Windows, cropping up in the as far back as the days of Windows 3.x before its final incarnation, version 12, in Windows 7.

Despite Microsoft ushering the latter to its boneyard last year, Windows Media Player lives on as a component lurking within more recent operating systems. Indeed, even in our most bleeding-edgiest Dev Channel Windows 11 build, wmplayer.exe lingers like a toxic airborne emission following a vaguely indigestible meal.

The retro-theme continues on through the use of .bat files, a mainstay of many an administrator over the years.

Sadly, however, the TIMEOUT command does not appear to have been sufficient for New York's finest to plug in the network cable or bring to life the server where the video is housed. ®