The National Museum of Computing (TNMOC) has announced the winning entry for its BBC Micro-inspired music challenge. 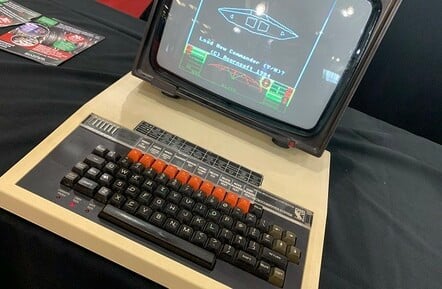 The audio is heady stuff, taking this hack back to teenage years spent mashing the keys of various 8-bit home computers while increasingly urgent music served to highlight a distinct lack of progress via the medium of the noise and tone channels.

The competition ran over the summer, and the entries were judged by authenticity, originality and catchiness. For the latter, we'd still have to recommend the sheer awesomeness of Rob Hubbard's Thing on a Spring.

Unlike Hubbard's opus (which showed off the Commodore 64's SID chip) TNMOC's competition centred around the 40th anniversary of the BBC Micro, which did not share the chippery of Commodore's (then) finest. Instead, Texas Instruments' SN76489 with its three tones and one noise generator featured.

Housden said of the winning composition: "Richard's entry was a great composition. It's well arranged with nice use of various sounds and textures and a strong melody. I was left wanting to hear more."

Hovsepyan's effort was also inspired by other pieces composed with a 2A03 synthesizer as well as the Undertale soundtrack. The 2A03 is the 8-bit CPU found in the Nintendo Entertainment System (NES), which found itself plugged into many a domestic television during the 1980s. The chip has since found its way into a number of synthesizers.

Hovsepyan, who collected a goodie bag including Acorn – a World in Pixels along with free entry and a guided tour of TNMOC, told the museum that his ambition was to become a game developer for Valve or Jagex (the developer of RuneScape.)

A worthy goal. However, we'd just like to hear a bit more than 30 seconds of that tune and maybe see a game replete with 8-bit-esque blocky pixels to accompany it. ®