Get real: Say what you like about your app but don't be surprised if I trollsplain

My next column will be written in spaaaaaace

Something for the Weekend, Sir? Look deep into my soil. Hold it, feel it, smell my soil.

Like you, the sub-editors au Centre Vautour have assumed a spelling error – or at least a smelling error – and are about to correct it. Me too: it's the first thing that popped into my head when reading about a subscription box service called "Mind, Body & Soil".

I was relieved to learn that it's a bad pun for a product promoting better mental health through gardening. My diseased mind – certainly not yours, of course! – mistook plant care for scatology on the balance of one innocent homonym. I am turning into one of those desperate internet twonks who jump on every word and deliberately misinterpret everyone just so that I can trollsplain them.

"Shit!" I thought to myself.

I have history in this particular field of inexpertise. While it has always been routine for marketeers to make outrageous claims about mediocre goods they are trying to shift, personally I feel it impossible to let them pass without comment. Every time a press release crosses my desk that suggests an app or hardware product will guarantee some measure of achievement or satisfaction, I can't help hitting the Reply button and asking for the official terms and conditions of the guarantee.

If the marketeer responds at all, it will be to confirm that no "guarantee" of this sort exists: they just put that word in the press release because it sounded good. And I nod to myself while humming an affirmative, self-important I-was-right-you-were-wrong "hm-mm!" like I was some sort of fucking Yoda. Complete arsehole become, have I.

Every time I determine to stop trollsplaining, another wild claim turns up to provoke my media midi-chlorians. This week it was MY AAA, a paid-for social media app that ruthlessly rides the same mental-health bandwagon, hiring professional boxer Tyson Fury to promote the launch. The press release promises the app "allows unbridled behind the scenes access to all of your favourite musicians, podcasters, sports stars, celebrities, artists, actors and many more figures from the fitness, fashion and beauty industries."

Well, obviously this is not true. Frank Sidebottom is nowhere to be found on the system.

I was about to fire off an email to express my dismay that, contrary to their claims, not all my favourite dead northern celebrities with papier mâché heads are represented. But I graciously held back. Let's be realistic, we see this "all your favourite…" nonsense so often, it's no longer just false, it's become utterly meaningless and unworthy of the dignity it would acquire by giving it my attention. Besides, what if Fury decides to punch more than my mental-health buttons?

The trick, I guess, is to pick a line that is pointless to cross, even for a dedicated trollsplainer like myself. For example, consider the vast variety of tech-inspired face masks that has spread across the (figurative) face of the fashion market, (figuratively) ear to ear, over the last 12 months. A French startup called R-PUR has just launched yet another range of smart 20nm-filtering masks for commuters – a worthy endeavour, surely? – and then caused a disturbance in The Force by claiming "We made it attractive and pleasant to wear."

Effective it may be. Creepily trackable, certainly. But attractive? You're joking, right? They look like this: 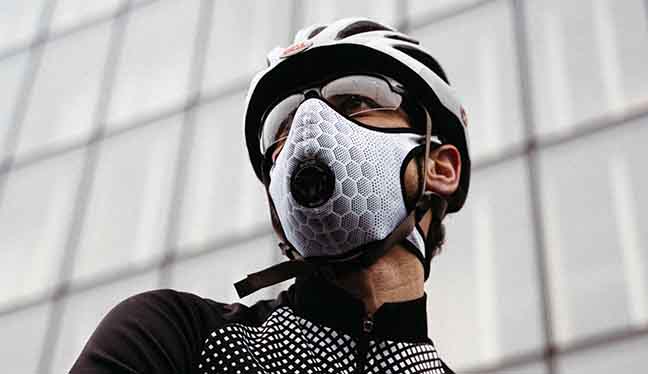 I won't stoop so low as to snigger that they make the wearer look like a tit. But they do rather remind me of this:

Still, who am I to lecture R-PUR about fashion? Let's be realistic: I wear a T-shirt – the same type, v-neck, plain colour, no print – every day of my life. I suppose what it comes down to is that I am willing to be realistic about my limitations if everyone else is about their claims.

On the other hand, you can take realism too far. There's no need to "keep it real" if doing so leads you from The Questionable to The Ludicrous.

There may have been a time when every marketeer's claim that their product is "out of this world" would incite me to enquire about their space programme. Not any more. The claims have become real; they have switched from figurative to literal. Now when I read this phrase, the chances are that they've stuck their product on a rocket and sent it beyond the upper atmosphere… purely so they can use that phrase in the press release.

Especially baffling is the current clamour to put an actor and film crew into space to record footage for a movie. After Tom Cruise announced he was working with SpaceX and NASA to get himself filmed in the International Space Station, Russia got in on the act and booked actor Yulia Peresild and director Klim Shipenko on the first available Soyuz MS-19. They docked at the ISS this week.

Now while I insist on realistic claims from all those around me, I don't seriously expect sci-fi movies to be actually filmed in space. That's what CGI is for, right? I mean, would I really have noticed the difference if Gravity had been shot in Earth orbit rather than in front of a green screen? Should I now criticise The Martian because it was deceptively filmed on a fake planet?

Maybe this heralds a new era in realism in movie-making. For Netflix's next miniseries drama about a serial killer, the lead actor will have to murder people for real or face the wrath of trollsplainers. Monster movies will have to feature real monsters. Superhero movies will involve real superheroes. As for any future series of The Walking Dead, well, I don't fancy applying to be an extra, that's for sure.

No, I don't expect everyone to be literal all the time. Just tone down your claims a little, that's all, and I will tone down the trollsplaining. But if you're casually telling me that you can bring Frank back to life…

Alistair Dabbs is a freelance technology tart, juggling tech journalism, training and digital publishing. At least five promotional messages have just passed across his smartphone screen recommending a white paper that can solve all his problems at work. What, all of them? He looks forward to reading their suggestions for solving careless banana-crunching by open-mouthed colleagues at his coworking space. More at Autosave is for Wimps and @alidabbs.