Jamstack research: Typescript and serverless are the winners

A survey of Jamstack developers shows rising use and popularity for cloud functions and the TypeScript programming language - along with a warning for entrenched content management system WordPress.

Jamstack or JAMstack (JavaScript, APIs and Markup) is an approach to web development that is based on static pages with dynamic content rendered by JavaScript calling web services. This makes it amenable to optimisation by content delivery networks – although it may shift the performance burden from web server to whatever server-side code lies behind the APIs.

The Netlify survey was conducted between June and August and had nearly 7,500 respondents, the majority triggered by a Netlify email. Therefore it is not representative of web developers as a whole, and even within the Jamstack commumity; it is biased towards Netlify contacts and customers.

One characteristic of this survey is the preponderance of newer developers, with 50 per cent having four years or fewer of relevant experience. This means their preferences could be a sign of future trends though nothing is certain.

Only around 70 per cent of respondents were employed full time, or as contractors, and 16 per cent were students. 32 per cent of those surveyed are working on sites that serve millions of users. 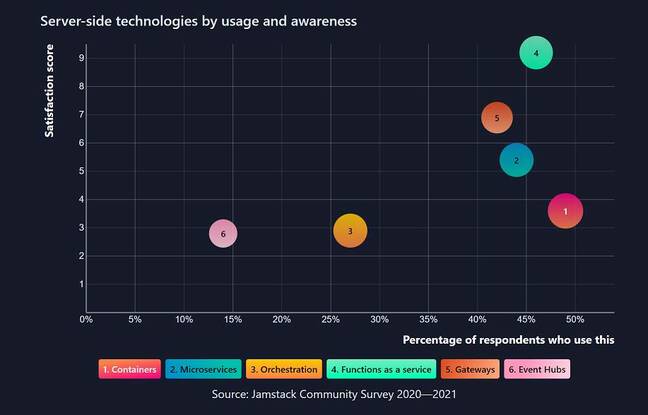 Functions as a service tops the satisfaction charts

The first was that use of functions as a service to power an API is second only to containers in popularity, and much higher in satisfaction (around 9 versus 3.5). This may in part be explained by usage of Netlify's own function service, which actually runs on AWS Lambda, but it also shows the appeal of letting a cloud provider run code without having to worry much about the infrastructure used to run it.

Another notable statistic is that these developers largely use Figma for designing user interfaces and are happy with it, awarding it by far the highest scores for both usage and satisfaction. Adobe XD (Experience Design) was second but a long way behind.

Netlify also asked respondents about which CMS they use. The venerable WordPress has the highest usage (nearly 40 per cent) but only 0.5 per cent satisfaction. WordPress Headless, which uses the WordPress back end but a custom Jamstack front end, fared better for satisfaction but still only around 1.25. The happiest users were of Strapi or Sanity - though again, these are Netlify users so a bias toward Jamstack is unsurprising.

When it comes to programming languages, the big story is not that JavaScript is most used (at 95 per cent), but that TypeScript has by far the highest satisfaction at nearly 8 points. An analysis of changes since last year's survey is even more telling, with TypeScript up by around 14 per cent and JavaScript slightly down in both usage and satisfaction.

"TypeScript is taking over. It grew enormously in usage, and its satisfaction score climbed 2 points," said Netlify data evangelist Laurie Voss in a session at last week's Jamstack Conference.

Voss also highlighted the dominance of React.js in web frameworks. "React is unique, it is defying gravity .. at 8 years old it should be over," he said – though in terms of usage gain, it is Next.js (based on React) that is the biggest winner since last year. "React is the new jQuery," Voss added. "Browsers will cave and make React APIs native to the web," he claimed. ®

Anatomy of a campaign to inject JavaScript into compromised WordPress sites