Meatballs, Abba, and bork: 3 things Sweden is famous for

It's what The Chef would want

Bork!Bork!Bork! Bork is taking a trip back to its spiritual home with yet another warning for administrators who fail to attend to their flock of Windows PCs.

We are delighted to see that the signage in Sweden is bang up to date in the operating system department, even if the disk capacity on offer at Arlanda Airport appears less than tippity top, judging by this submission from reader Jonathan. 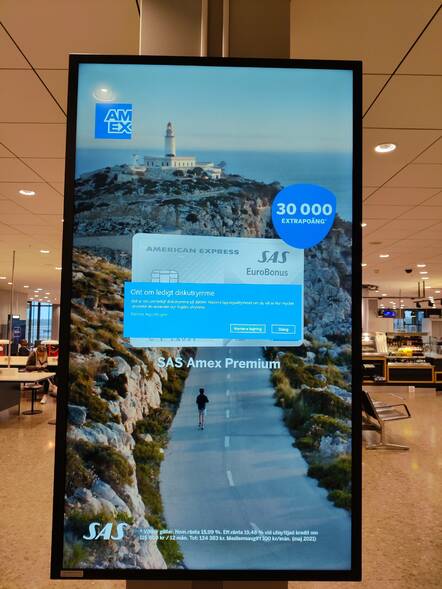 Unless this is some new American Express mock credit card number of which we aren't aware, it looks like Windows 10 is bleating about local disk space.

Microsoft's minimum disk requirements for the OS call for 16GB for 32-bit versions or 20GB for the 64-bit version. Good luck with that – we'd suggest quite a bit more to make things even vaguely usable (and avoid the borkage on display at Arlanda).

Windows 11 infamously upped the ante on the hardware requirements, because Microsoft needed a lot of lipstick to cover up the worst of its occasionally porcine product. Hopefully the smart Swedes will have ensured their signage has the latest in CPU and TPM trickery in order to receive a supported Windows 11 update in the near future.

That said, Microsoft was ahead of the game in Sweden. When we saw its Stockholm office in 2019, it proudly boasted that the future would feature a great deal of remote working (there were only around 237 workstations for the company's 600 or so workers at the time). Three months later, "remote working" became a reality for many.

Sadly, however, that same forecasting ability has not been applied to the voracious disk requirements of Windows 10. To the best of our knowledge, the warning obscuring the SAS and Amex link-up is inviting the user to find out how much disk space could be saved through managed storage.

Or perhaps to consider running something not quite so hefty as Windows 10 if all you want is a slideshow of ads? ®