Windows terminates here. Please remember to finish setting it up on arrival

Bork!Bork!Bork! It's a whole new world for bork today as a Washington Metro platform indicator suggests an alternative to the usual train for weary commuters. How about getting a bit more out of Windows?

This is a suggestion that everyone wants to see while waiting for a Yellow Line train at Washington Metro's Huntington Station (located, helpfully, on Huntington Avenue in the Huntington Area). 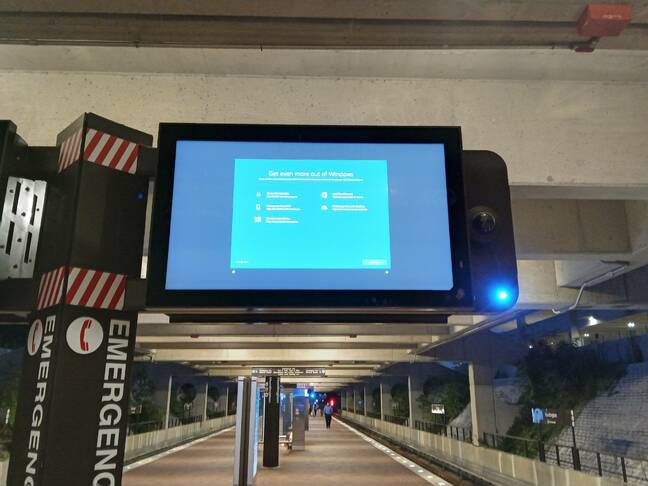 It looks to us as though somebody has started setting up a new instance of Windows and then thrown in the towel, perhaps not realising that the out-of-box experience (OOBE) has become more of an out-of-platform setup (OOPS), causing minor confusion among passengers that are expecting to see when the next Yellow Line train might depart.

A whole new world indeed. Where once blue screens or boot loops were the order of the day, now it is forgetful admins shovelling code onto servers that probably don't really need it.

Huntington is at the southern end of the Yellow Line, acting as a terminus, and was opened in the 1980s. It recently underwent a renovation which is, alas, incomplete as far as Windows is concerned. The cheery exhortation to set up Windows Hello, hook up a mobile phone, and perhaps put on Office 365 seems a bit excessive for something that has one job: telling punters how long they have to wait for a train.

Still, there is much to like in Washington. We'd recommend a jaunt to the Smithsonian (on the Blue, Orange and the recently added Silver lines), which isn't too far from Huntington. As well as the nearby Smithsonian Museums, where the architecture of the station is interesting in its own right.

Sadly, the same can't be said for the Windows OOBE. We can but hope that nobody has connected the unfortunate device to the station's platform announcement speakers. The doomed Cortana has a habit of begging for interaction during the process, usually without prompting from the user.

Then again, perhaps platform announcer could be a new role for the electronic personal assistant. The poor thing has little enough to do nowadays. ®