Deployment of 120,000 headsets hoped to 'increase lethality' pushed into 2022

The US Army has delayed a massive rollout of Microsoft's HoloLens virtual reality headsets.

The Integrated Visual Augmentation System (IVAS) project kicked off in 2018 with tests of HoloLens headgear in the hope the VR goggles would "increase lethality by enhancing the ability to detect, decide and engage before the enemy". That deal saw $480M flow to Microsoft and doubled its HoloLens sales.

The Army clearly like what it virtually saw, because in March 2021 it moved from prototype to production and "rapid fielding". Microsoft said the deal could be worth as much as $22 billion.

On Thursday, the project was paused, without much of an explanation.

"The Army decided to shift the IVAS Operational Test and fielding to a date later in FY22," reads an announcement from Project Executive Office Soldier, a part of the US Army dedicated to procurement and equipping soldiers.

While the statement does not offer a reason for delays in the project, it includes this sentiment: "This decision allows the Army and Industry team to continue to enhance the IVAS technology platform ensuring Soldiers achieve overmatch in Multi Domain Operations."

The document also reveals: "Army conducted an Adversarial Electronic Warfare and Cybersecurity Test in September 2021 and plans to execute testing regularly throughout FY22."

Might those words suggest that work to date has not gone as well as hoped? 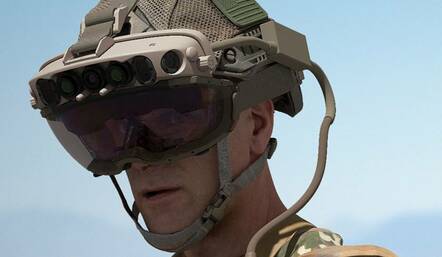 Whatever the state of the project, the statement assures us that the Army "is fully committed to its partnership with Microsoft to advance specific technologies to meet operational requirements and maximize warfighter impact." It all sounds very comforting.

The statement also offers a new timeline for the project, with operational tests scheduled for May 2022 and the first operational unit equipped with IVAS kit scheduled to go into action in September of the same year.

And what if there is no theatre of combat in which US warfighters can achieve overmatch, maximize impact and increase lethality by September next year? Sadly, history tells us it won't be long before something comes along. ®