Ubuntu 21.10: Plan to do yourself an Indri? Here's what's inside... including a bit of GNOME schooling

Review Canonical has released Ubuntu 21.10, or "Impish Indri" as this one is known. This is the last major version before next year's long-term support release of Ubuntu 22.04, and serves as a good preview of some of the changes coming for those who stick with LTS releases.

If you prefer to run the latest and greatest, 21.10 is a solid release with a new kernel, a major GNOME update, and some theming changes. As a short-term support release, Ubuntu 21.10 will be supported for nine months, which covers you until July 2022, by which point 22.04 will already be out. 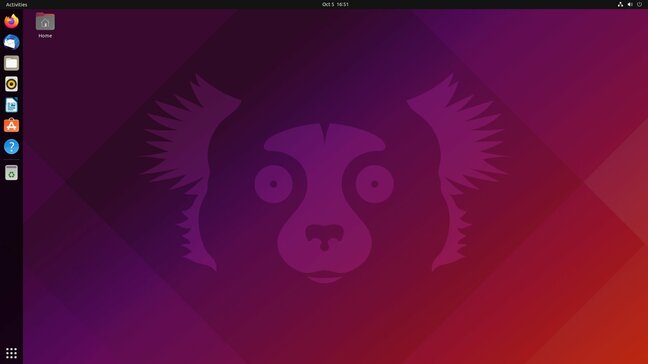 The headline feature in 21.10 is GNOME 3.40. Actually make that GNOME 40 since the project has decided to drop the major version number. GNOME 40 arrived a little late to make spring's Ubuntu 21.04 release, and it may not seem like news at this point, but it represents a big change for Ubuntu users.

The most obvious change is a metaphorical one: workspaces are now conceptualised horizontally, and they've been given a much more prominent place in the user interface. Instead of the vertical list off to the side of GNOME's activity overview page, workspaces now are the Activity page. 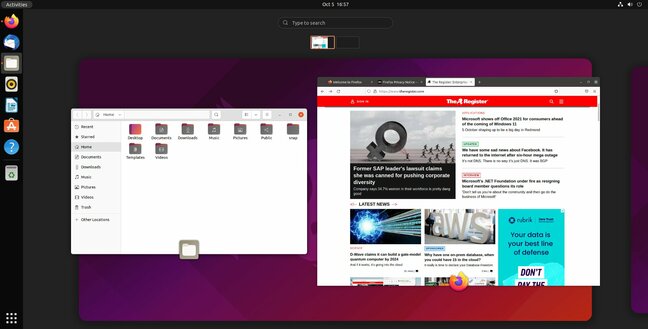 Hit the Super key (or click the Activities menu item) and GNOME displays your current workspace with thumbnails of all the open windows. Other workspaces are displayed to the left and right in a horizontal row. As someone who finds this the natural way to conceptualise virtual workspaces, I'm a fan, though I do recognise that if you're used to thinking of workspaces vertically, this may be jarring.

Along with the new spatial metaphor comes some new ways to navigate through workspaces. There's good gesture support. A three-finger drag left or right will switch workspaces if your trackpad supports gestures. You can also hold down Super+Alt and use your mouse scroll wheel, or use keyboard shortcuts Super+Alt+Right Arrow and Super+Alt+Left Arrow. The keyboard shortcuts are customisable (as a Vim user, I set them to Alt-J and Alt-K), but I could not find a way to change the gestures.

Application thumbnails within the Activities view now have an app icon attached, which makes it easier to identify what's what when you have a lot of open windows (you can also now get the Window title as a tooltip when you hover over a window thumbnail). 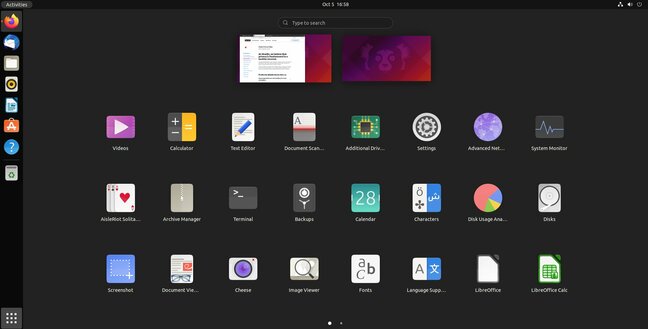 Along with the new Activities view comes a slightly revamped application launcher interface. Here again workspaces are displayed horizontally, and the horizontal metaphor extends to the list of applications. Paging here feels less useful than with workspaces; I would have preferred to keep the scrolling list, but the truth is I rarely do anything but search in the application launcher.

Sitting on the dock

One big GNOME 40 change you won't find in Ubuntu is a bottom dock. Ubuntu 21.10 sticks with the dock on the left-hand side of the screen – as it has since its very first release. That said, if you want the dock on the bottom it's possible.

While it's still in the same place, the dock has undergone a couple of changes in this release. Firstly, there's a trash can in dock, and a new separator between pinned apps and running apps that are not pinned.

Other changes include a whole lot of rounded corners, which ironically makes GNOME end up looking somewhat like Windows 11. You'll notice the rounded corners mainly in the shell and in Nautilus, the default file browser. Speaking of Nautilus, there's been a couple changes, notably the ability to tab completely in the location bar, and a new option to sort by creation date. The latter, surprisingly, was not possible until now. The rest of the default GNOME application suite has been updated as well.

Ubuntu 21.10 puts its own stamp on GNOME 40 in a few places. As noted above, the dock remains on the side of the screen. The theme has changed slightly. Ubuntu is now using the Yaru Light theme out of the box. The old default, a mix of the light and dark Yaru themes, is no longer available. Open the Appearance settings panel and you'll see two choices: light or dark.

Firefox, while still the default web browser, is now a snap app. That's a change you probably won't notice, but it should make it a bit easier for Mozilla to push out updates. The change comes at Mozilla's request, but it represents a significant step down the road of Ubuntu's transition to snap packages.

Ubuntu 21.10 ships with Linux kernel 5.13. I was a little disappointed that 5.14 didn't make the cut, but to be fair it only arrived a little over a week before 21.10. 5.14 solves numerous issues with amdgpu, sleep, and restore, which have plagued me on a Ryzen 7 4000 series chip which won't sleep properly with Ubuntu 21.10. Unfortunately I and others having problems with amdgpu will have to wait for the next Ubuntu release to get a kernel with full support.

That said, there is a lot to like in the 5.13 kernel that ships with Ubuntu 21.10. Anyone looking to put Ubuntu on a recent Macbook with Apple's new M1 chip will be happy to hear that 5.13 supports the M1.

It's very preliminary support – you're not going to install Ubuntu on an M1 Air easily just yet. In fact, I could not even get the Ubuntu installer to boot from a USB stick, but at least someone is working on it. Just know it might be a little while longer before it reaches that usual "just works" status.

Linux 5.13 also has initial support for Intel's 12th-generation chips, which will be here before you know it. Along the same lines there's initial support for the AMD's Aldebaran GPU, also slated for next year. Remember when you had to wait a good six months before Linux supported a new chip? Happily those days are fading into memory.

One last bit of hardware support worth mentioning is that Lenovo's ThinkPad X1 tablet keyboard now works out of the box. I'm happy to see support coming for some of the more interesting hybrid devices like the X1, which seems to be one of the last areas of lacklustre Linux support.

For some time Wayland has been the default display manager where hardware supports it. That last phrase is key because Wayland and Nvidia do not always get along. Fortunately, Ubuntu 21.10 now supports Wayland sessions while using the Nvidia proprietary driver.

Along with the main Ubuntu releases, all of the various different flavours have updates as well. Of particular note is Kubuntu 21.10, which brings the Plasma 5.22 desktop to what I think is the best KDE-based distro around.

Plasma 5.22 is full of small but very helpful updates, including two that really help with the overall experience. First, the KRunner application launcher (what comes up in KDE when you press Alt+Space) now shows several lines instead of just one. This is handy for things like "define + work", which taps the dictionaries to give you the definition. Now you don't even need to open the dictionary – you can read it in KRunner and be done. There's also a more unified appearance to the system tray area of the task bar, and what the developers call "adaptive transparency." That is, the task bar is translucent, but becomes opaque when there are any maximised windows.

Xubuntu, based on Xfce, is typically notable for its lack of change, which is refreshing in a world where every piece of software seems to feel the need to completely rewrite and redesign every couple of years. That said, there are some new apps coming to Xubuntu this time around, including a couple of disk utilities, Rhythmbox, and Clipman for clipboard management.

Sadly, Pidgin, the once great multi-platform chat app, has been removed – because, well, chat apps are mostly proprietary and siloed these days, which means Pigdin can't connect to much anymore.

If you want the new features of GNOME 40, this upgrade is a no-brainer. Having been waiting for horizontal workspaces, I went ahead and upgraded my Ubuntu machine back when the daily builds started coming out. There were a few hiccups along the way, but ever since the beta was released I've had no stability issues at all, except with some third-party Electron apps, which like to crash unexpectedly.

Still, as long as you don't depend on an Electron app in your daily workflow, and you're OK making the leap to next year's LTS when support for Impish Indra runs out, Ubuntu 21.10 is well worth the upgrade. ®