Alternative headline: Yet another widely used project maintained thanklessly by 'some random person in Nebraska'

A bug in gpsd that rolls clocks back to March, 2002, is set to strike this coming weekend.

The programming blunder was identified on July 24, 2021, and the errant code commit, written two years ago, has since been fixed. Now it's just a matter of making sure that every application and device deploying gpsd has applied the patch.

The Network Time Protocol (NTP) provides a way for devices and services to keep accurate time using a hierarchical set of servers rated in terms of precision, with "stratum 0" representing the most accurate time sources.

It's available in Android, Linux, macOS, and other Unix-like operating systems. The gpsd website says the software shows up in mobile embedded systems like UAVs, robot submarines, driverless cars, and in applications used in marine navigation and military IFF (Identification Friend or Foe) systems.

GPS satellites keep track of the number of weeks that have passed since January 5, 1980. And they broadcast the week number as a 10-bit unsigned integer, which can represent values from 0 to 1023. So every 1024 weeks, or 19.6 years, the system rolls over.

Maintainers of various Linux distros, concerned that the bug could result in "the real Y2K panic event," have applied the patch. Debian and Ubuntu have issued the fix.

The patch has been backported by Debian to their 3.22 series, Miller told The Register in an email.

Asked to estimate the likelihood that things will go awry has a result of people not patching this bug, Miller said, "Depending on what GPS/GNSS receiver is in use, and how it is configured, the chance is either 0 per cent or 100 per cent. Devices configured to output 'Standard' NMEA, will not be affected. Devices, like those from u-blox, running in binary message mode, will be affected."

Miller, who is retired, told The Register in a phone conversation that he maintains gpsd because it's more interesting than playing Sudoku. Nonetheless, he'd welcome support for the project, particularly GPS equipment that he could use for testing.

"Some random guy, who refuses to out himself, used his company GPS simulator to find this bug a few months ago," he said. "I sure wish I had some equipment like that. But most GNSS manufacturers just ignore gpsd. Even when we find bugs in their stuff."

Miller, who asked that GPS kit maker Meinberg be recognized for its support for gpsd, said he's not sure who is actually using the software he maintains. "I know for a fact that a lot of military stuff uses it," he said, pointing to "man-portable" or "manpack" radios. "I know it's in at least one rocket system. I'm told it's in tanks and delivery trucks and divers' watches."

But determining which of these systems, if any, will suffer adverse effects is difficult. Older versions of the software, 3.19 and earlier, should be okay because they preceded the offending commit. So manufacturers who have not updated their software in years may emerge unscathed.

"The people who are going to be potentially blind-sided are the people who throw up a GPS network time protocol client and look at it every two years – which is a lot," said Miller. "I don't know how big ... I suspect we'll find versions of NTP appliances that got updated two years ago and they all fall flat on the 24th."

Miller suggested financial firms might also run into compliance problems. By law, he said, every market transaction has to be accurately time stamped. If somebody bought the wrong GPS NTP time server and put it in their brokerage house, it could get ugly, he said.

"There will be issues," said Miller. "A few people will be blindsided, and a few of them will take it out on me and it's my mistake." 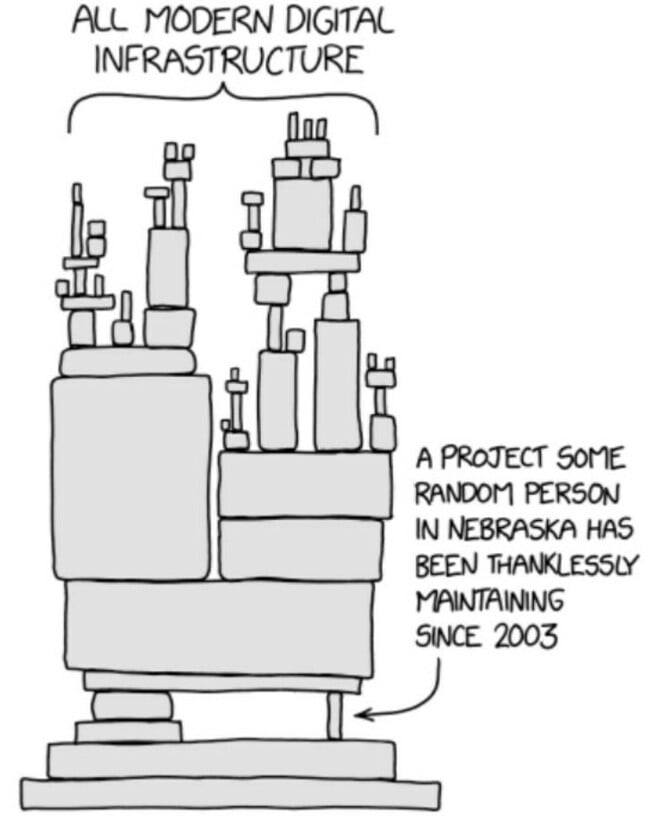 In his email, Miller included a link to an XKCD comic from last year that's widely known among software developers. It depicts a complex tower of blocks, representing "All modern digital infrastructure," propped up by a fragile column labelled, "A project some random person in Nebraska has been thanklessly maintaining since 2003."