Windows 11 Paint: Oh look – rounded corners. And it is prettier... but slightly worse

New iconography, minimalism, less text – and at least it is not Paint 3D

Microsoft's redesigned user interface for Paint in Windows 11 is prettier but perhaps a little less useable than the previous version. 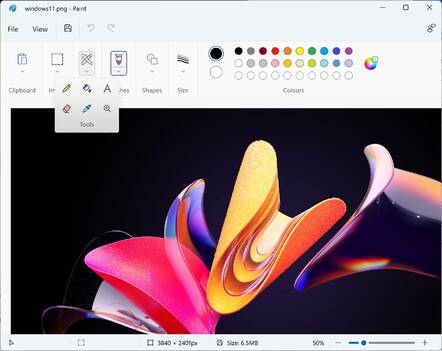 Confession: we are regular users of Paint, which is among the oldest Windows applications. The first version was in the 1985 Windows 1.0, licensed from ZSoft Corporation's PC Paintbrush, which was monochrome. At the time, paint applications were closely associated with that new-fangled alternative to the keyboard for screen navigation, the mouse. Windows 3.0 in 1990 brought colour support, though the application was still called Paintbrush. 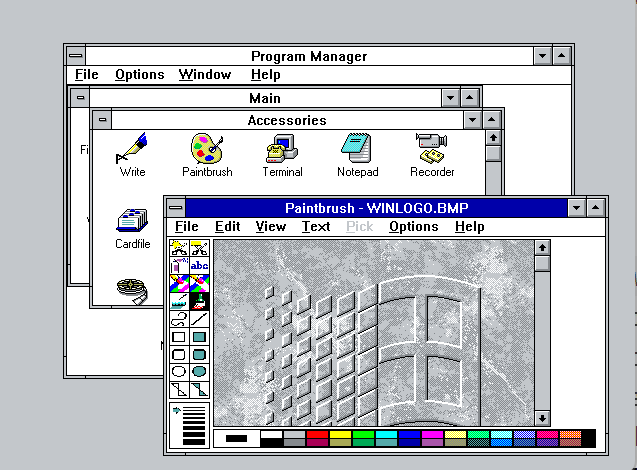 In Windows 95 it was updated and just called Paint. New features like PNG support arrived in Windows 98, and in Windows Vista (2007) a handy Crop function. Windows 7 in 2009, possibly peak Paint, introduced a then-fashionable ribbon UI and some nice features like 50 levels of undo. 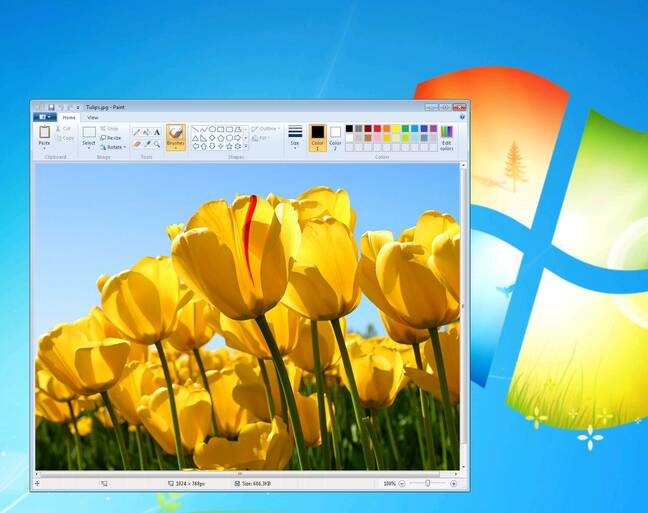 Paint was little changed in Windows 8 (2012), but in Windows 10 Creators Update (2017) Microsoft decided that users longed for an extra dimension in their doodles, introducing Paint 3D as the new Paint.

The classic Paint, Microsoft said, was no longer in active development and might be removed in future.

However, Paint 3D lacked the features users liked about Paint: its fast startup, simple UI, and provision of most of the features actually needed for quick editing and resizing of images.

In addition, there was little interest in 3D. Microsoft, to its credit, listened, and in 2019 said that Paint 3D would no longer be pre-installed. Paint remained, and in Windows 11 it even received a UI makeover. 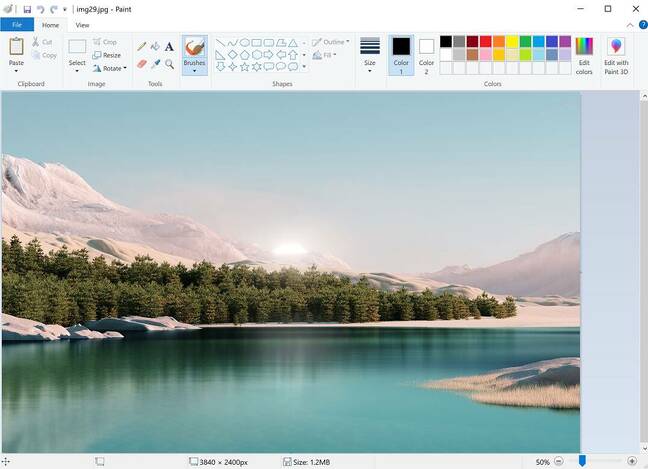 Paint in Windows 10, little changed since 7 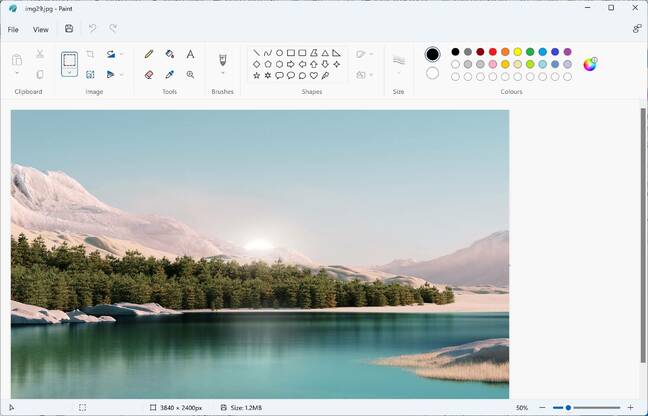 Windows 11 Paint with its new UI

What has changed? Functionally, the two versions seem identical.

Here are some of the changes in detail

Almost all the icons have been replaced. Microsoft has written about Windows 11 iconography here.

The new iconography is intended to be minimalist, based on "simple and geometric forms," and using "modern metaphors that are easily understood."

Anyone who has puzzled over diagrammatic instructions when trying to use or assemble a new device will know that what is obvious to the designer may not be obvious to the user. The icon for Flip vertical looks like a paper aeroplane, for example. The new copy icon is so minimalist that it is, to our eyes, less obvious than the old "two sheets of paper" design; but these things are subjective and become familiar.

It is notable, though, that the designers have removed text. The ribbon in Windows 10 Paint has 20 words (not including "Edit with Paint 3D, which has been removed) when fully expanded, whereas Windows 11 Paint has just 7. There are tooltips, but these too are more minimal. For example, old Paint has a tooltip that states "Resize and skew the picture or selection" and also shows the keyboard shortcut. The same tooltip in new Paint just says "Resize". The Skew option is not discovered until you click. 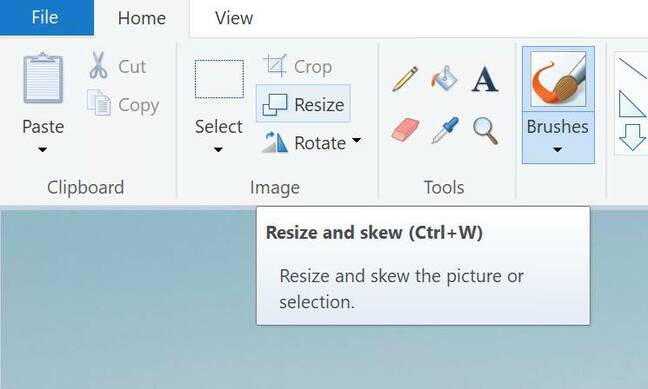 Another change is that the View ribbon has gone, replaced by a View dropdown menu. That is evidence that Microsoft's love affair with the ribbon UI is fading, perhaps, since there was a time when the ribbon was used wherever possible. The menu has the same options as before, with one exception. In old Paint, there are chunky buttons for zoom in and zoom out.

The new menu has only the 100 per cent option. There is a zoom plus and minus, along with a draggable control, at bottom right of the window, and we presume that was considered sufficient. This is less good, though, as the pointer must be moved a long way to get from top left to bottom right, and the targets are small. Luckily the keyboard shortcuts Ctrl+PgUp and Ctrl+PgDn still work – though we got those via tooltips in the old Paint, that have now been removed. 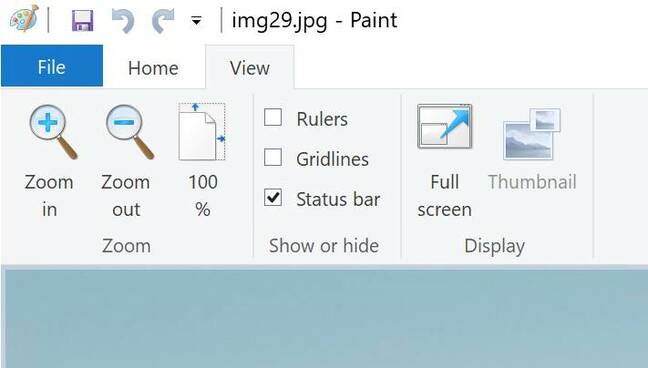 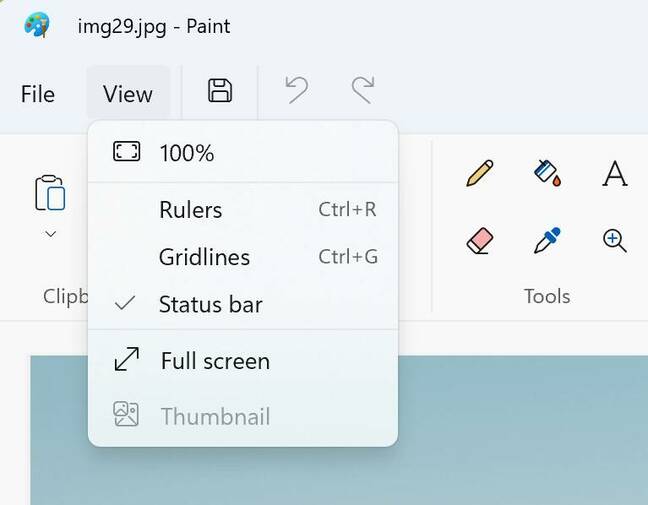 The View menu in Windows 11 Paint

The drop-down View menu also requires more clicks in some circumstances. Imagine a requirement to turn on rulers and gridlines, and zoom to 100 per cent. Old Paint: View tab, then 3 clicks. New Paint: View menu, 100 per cent, View menu, Rules, View menu, Gridlines, because the menu closes after each selection. 6 clicks.

We should mention that the colour palette in the Windows 11 Paint has round selectors, where the Windows 10 paint has squares. The targets seem smaller (a bad thing) but are not, since the clickable area remains a square. In other words, clicking near but outside the circle still selects the colour.

Microsoft principal program manager Dave Grochocki has written about the new Paint here. He states that future updates will include "dark theme, a centered canvas, and updated dialogs." It is true: some dialogs are still the old ones, resize for example. There are also some oddities: the File - Settings option brings up not settings, but the About dialog.

As constant users of Paint, we think it looks better than before, but usability is a little worse, which is disappointing. That may change as the new features touted by Grochocki turn up. Then again, as with its stable companion Notepad, the most important thing is that this venerable application does not lose the speed and simplicity that is its primary appeal. ®