* Just a couple of billion years

The Moon remained volcanically active much later than previously thought, judging from fragments of rocks dating back two billion years that were collected by China's Chang’e 5 spacecraft.

The Middle Kingdom's space agency obtained about 1.72 kilograms (3.8 pounds) of lunar material from its probe that returned to Earth from the Moon in December. These samples gave scientists their first chance to get their hands on fresh Moon material in the 40 years since the Soviet Union's Luna 24 mission brought 170 grams (six ounces) of regolith to our home world in 1976.

The 47 shards of basalt rocks retrieved by Chang'e 5 were estimated to be around two billion years old using radiometric dating techniques. The relatively young age means that the Moon was still volcanically active up to 900 million years later than previous estimates, according to a team of researchers led by the Chinese Academy of Sciences (CAS).

"This is the youngest crystallization age ever reported for lunar basaltic rocks by radiometric measurement, extending the range of radio isotopic ages of lunar basalt by 800 to 900 million years," said Chunlai Li, lead researcher for a paper published on Tuesday in Nature and a professor at National Astronomical Observatories at CAS. 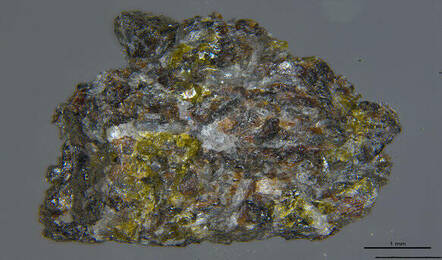 Hot stuff, back in the day ... A basalt chunk collected by the Chang'e 5 spacecraft. Source: Chinese Academy of Sciences. Click to enlarge

Basalt is an igneous rock leftover when lava cools and hardens. The latest lunar samples indicate molten rock still flowed on the Moon two billion years ago. Scientists have a spotty understanding of the Moon's geologic history.

Previous sample return missions collected lunar material that were dated using crater-counting chronology – a less accurate method that involves estimating age by looking at the number and depth of crater impact events at the sample site.

"The new age of 2.03 billion years ago obtained for the [Chang'e 5] basalts resides squarely in the center of this large gap, fulfilling the long-sought-after goal to bridge the unanchored middle portion of the lunar crater-counting chronology and improving this critical tool for dating unsampled surfaces on the Moon, as well as for translating the lunar crater-counting chronology to other planetary bodies."

The Chang'e 5 samples were collected from Oceanus Procellarum, a lunar mare of basalt covering over ten per cent of the Moon's surface. Unlike other retrieved basaltic rocks, these latest samples don't have the same levels of potassium, phosphorus, and rare earth elements – a composition known as KREEP – and scientists aren't sure why.

"The KREEP-like components are related to how these youngest magmas originated," LI said.

"According to the previous theory, the KREEP-like components would provide heat to sustain the longevity of young magma. However, if this is not the case – as these results suggest – we should rethink the mechanisms underlying the longevity of the younger lunar magmatic activity." ®