At first glance, Microsoft appears to have torn up the infamous Windows 11 hardware compatibility list by inflicting the code on its latest games console.

Though the original Xbox (now approaching its 20th anniversary) was little more than a jumped-up PC in a hefty black box, sticking vanilla Windows on the thing was probably a step too far for Redmond.

But a Register reader updating the rather excellent (if a tad hardware-hungry and occasionally buggy) Microsoft Flight Simulator on his Xbox Series X was greeted with the strange message: "Windows 11 has been successfully downloaded." 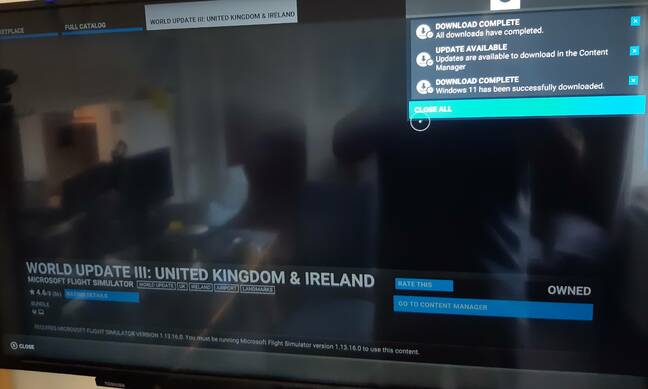 Could it really be Windows 11 and that whole shebang? We dare say no.

Microsoft has been notable in the past for unhelpful labeling. Whatever this update is, our reader certainly didn't ask for it.

Sadly, we lack a similar console to try things out for ourselves so we asked Microsoft for an explanation. Despite the usual perky promise that one was on its way, nothing has been forthcoming.

Helpfully, a couple of other readers have pointed out this download appears to be a promotion for Windows 11 that will appear within the game. What is this, a crossover episode?

The release notes for version 1.20.6.0 of the flight sim, dated October 19, state: "To celebrate the launch of Windows 11, Microsoft Flight Simulator is lighting up some of the world’s most famous points of interest in Windows 11 colors! There is also a free livery for the EXTRA 330LT."

So if you're wondering why Microsoft Flight Simulator is downloading Windows 11, now you know. Advertising. ®

Editor's note: This article was updated to include the relevant release notes.