Apple's seventh-gen Watch has managed to maintain its iFixit repairability rating on a par with the last model – unlike its smartphone sibling.

The iFixit team found the slightly larger display of the latest Apple Watch a boon for removal via heat and a suction handle. Where the previous generation required a pair of flex folds in its display, the new version turned out to be simpler, with just the one flex.

Things are also slightly different within the watch itself. Apple's diagnostic port has gone and the battery is larger. That equates to a slight increase in power (1.094Wh from 1.024Wh between 40mm S6 and 41mm S7) which, when paired with the slightly hungrier display, means battery life is pretty much unchanged. 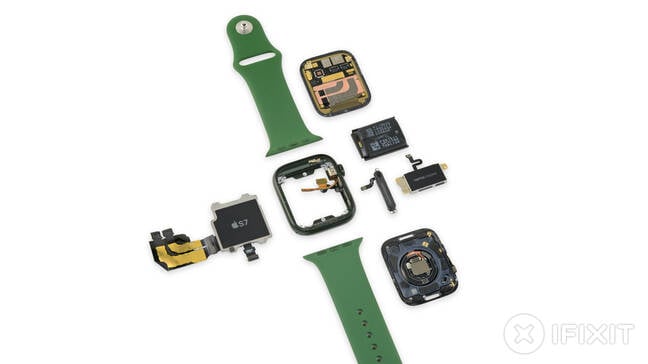 Components of the Watch ... Source: iFixit. Click to enlarge

Other than some tweaks to the speaker modules, the team noted that changes were "small, but impactful." Pulling things apart was simply less effort, with the Taptic Engine being released without recourse to fiddly brackets and, perhaps most importantly, components being swappable.

The latter is in marked contrast to the latest iPhone Pro.

The team were able to switch screens and Taptic Engine modules between Series 7 watches with little drama and all features still working. A battery lifted from a Series 6 also worked in the latest model.

"Not exactly recommended," the team observed, "but nice to know it works in a pinch!"

It all meant that while the repairability score of the iPhone Pro dropped to a 5 out of 10 this iteration, the Apple Watch has clung to its 6. Marks were added for the modular construction and ease of access but deducted for the fact the screen would need to be deglued and reglued for every repair.

Bonus points for the straps still being swappable, right back to the original. ®