Judging by the way your face lit up, my inbox just got more attractive

A message for you, (on your) rudie

Something for the Weekend, Sir? "You've got mail!" announces a voice on the tram.

How very 1990s, I think, imagining myself as a double-taking, pre-gravitas Tom Hanks in a remake of the lightweight romantic comedy. I tear my attention away from my book and look up to see who uttered this famous refrain.

A man standing across the aisle is staring straight at me. OK, I'm no Tom Hanks but this guy's definitely no Meg Ryan. It is unsettling. I look up and down the carriage for other potential sources.

"You've got mail!" says the man again, still staring at me. Our eyes meet. He nods in my direction in acknowledgement of attracting my attention. I don't recognise him at all. Besides, if he was an acquaintance he would probably have said something more conventional such as "hello".

He nods again, more insistently this time, evidently annoyed at my failure to interpret what his first nod meant. Oh no, we have entered that bizarre twilight zone of silent manspeak in which strangers on public transport communicate non-verbally by means of slightly embarrassed facial expressions. It's a kind of commuter performance art.

I look up and down the carriage again and then back to him. This means "Who, me?"

He nods again to indicate "Yes, you! Look!"

I raise my eyebrows. This means "I have no idea what you're on about."

Ha, that'll force him to take drastic measures. What will happen now? Expect the unexpected, as they say. How thrilling!

"You've got mail!" he says out loud, nodding slowly but emphatically one final time… and then he gestures in the direction of my crotch.

Well, that was unexpected.

I look downwards. We are now both looking at my crotch, as indeed are other commuters who find themselves lucky enough to be within convenient crotch-observation distance.

My crotch is illuminated resplendently with a large, bright envelope icon.

Ah, I see. That bulky LED panel I was testing has slipped. I got the idea from a paper by Canadian research students [PDF] at the University of Waterloo, Ontario. They have been working on pocket-sized LED matrix displays that are bright enough to shine simple icon notifications through fabric – an inexpensive alternative to smart fabrics with integrated electronics as favoured by malodorous scientists who never wash their clothes.

The idea of PocketView is sound enough: a wearable that alerts you with basic notifications, directions, silent alarms or whatever without need for a wristwatch, earphones or having to reach for your phone. It just works with the clothes you are already wearing – assuming you are not a leather fetishist or a naturist.

The other drawback, as I now realise, is that if I can see an effulgent notification exploding from my crotch, everyone else can as well.

I don't want another device pinging me messages, of course. In fact, I spend an inordinate amount of time disabling notifications from apps whose notifications I already disabled on multiple previous occasions but keep switching themselves back on.

This is immensely frustrating and detrimental to my mental health, almost as annoying as those press releases I keep receiving inviting me to review autobiographies of people who cocked up their lives before Jesus put it all right again. No matter how often I hit that "Unsubscribe" button, offers to send me review copies of happy-clappy how-I-found-religion books keep coming in.

I've not read any of the books but the marketing text is always the same – the author wants to tell me about pregnancy, divorce, heartbreak, and tragedy before explaining how they "filled the major vacuum in their life."

Just to show empathy, here's a photo of me filling the major vacuum in my life. 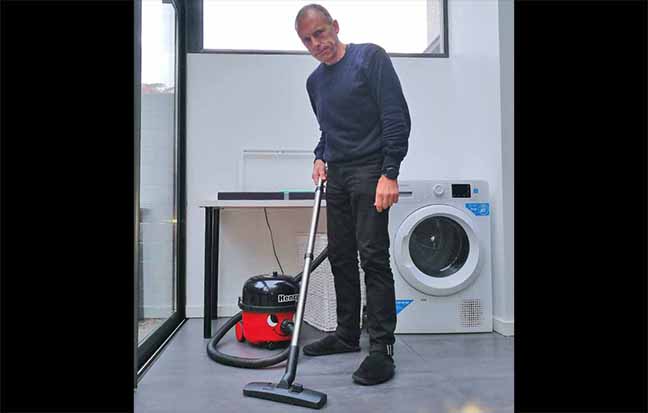 Anyway, what I'm hoping is that something like PocketView will lead to the development of cheap, high-resolution, through-fabric displays that I can employ to entertain AI-monitored CCTV systems.

If I can shine the right kind of message through my T-shirt in front of the right camera at the right moment, who knows what mayhem I can provoke the robots into?

If this sounds a bit silly and far-fetched, you obviously have not read this story about a motorist getting a penalty notice after an AI had incorrectly interpreted CCTV footage of an infraction 120 miles away. Not only did it mistake the number plate (KN19TER), the AI failed to notice that the footage was not of a vehicle at all but of a woman stepping into a bus lane while wearing a chunky sweater emblazoned with the word "KNITTER".

The temptation to get a bunch of mates to jog up and down bus lanes all over the country with your most annoying neighbour's number plate adorned on their chests is almost irresistible. Or just imagine letting your toddler run around a CCTV-monitored playground while you set his T-shirt smart-message to read "The Russians are coming". The AIs would launch the nation's warheads within minutes.

Ah yes, that'd do wonders for my mental well-being. I feel better already just thinking about the potential to fuck things up good and proper.

Not that mental health is a laughing matter – which is a shame because it should be, since laughing is good for you – but no less irritating than the repetitive religious books is being told that every new product to hit the market is somehow designed to improve your mental health.

Call me cynical but just because a product isn't specifically devised for stabbing yourself in the eye with a bread knife, it doesn't necessarily follow that it is a mental health product. I've read this "mental health" line applied to everything from note-taking apps to shoot-em-up games.

I'll make an exception for products that help you get to sleep quickly without drugs or alcohol. The problem is that they tend to be a bit clunky or over-elaborate, not unlike my DIY attempt at PocketView. If you move about in your sleep, the headphones come off, the nose-plugs pop out and the eye-pads travel southwards and transform into a gag. And they all make you look silly or scary, neither of whom do I consider my favourite Spice Girl or Mr Men character.

I make an exception for the Muse S, another such mediation and sleep headband marketed under the dubious title "digital sleeping pills". It's still too big and clunky for my liking but there is something subliminally familiar and vaguely cool about the look of the headband. 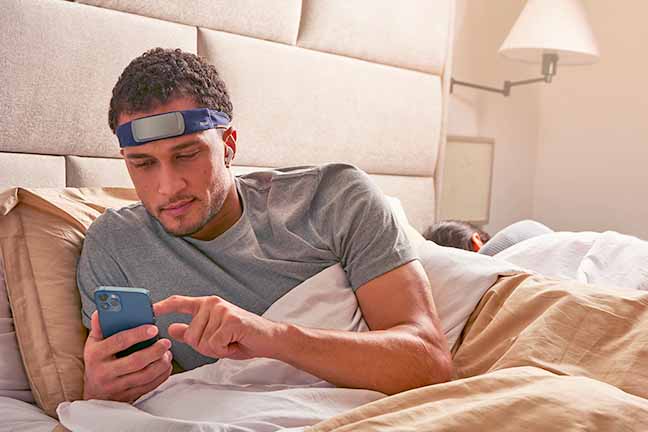 Spotted it yet? Maybe it's just me but I think it makes the wearer look like a certain Konohagakure ninja. Hone your sub-duvet powers, young novice! Defeat the evils of deep sleep apnoea! Rise up and become Hokage of the entire mattress!

Back on the tram, I am still undecided on what to do next. The envelope icon is still shining from my crotch. Worse, the tram is now passing through a tunnel and my crotch is illuminating the carriage, attracting the attention of more commuters. Those nearest to me are shielding their eyes. My crotch has that effect on people.

To dismiss the icon, I would have to tap firmly on it: that is, I would have to poke myself sharply in the crotch. For a less eye-watering UX, I would need to reach inside my trousers and tug the LED panel to one side: not so personally painful but not a great look when you have a captive audience watching your every move. Still, needs must.

I reach inside my keks and give my unit a tug. It won't move; the wires have caught on the zip. I try to manipulate the wires around the hem of the zip. It must look like a chest-burster from Alien got sent south erroneously by Apple Maps. My fellow commuters lean in to get a better view of my antics.

Frustrated, I withdraw my hand, grunt something like "Gaaah!" and thump the bastard thing from the outside using the base of my fist. It works, sort of. The good news is that the Mail icon has gone away. The bad news is that it has been replaced by another.

My crotch is now illuminating the tram with a smiley emoticon. Not the plain one, mind. It's the one that's blowing kisses.

After a couple of seconds, gentle applause ripples through the carriage. My mental health is restored. Today will be a good day after all. ®

Alistair Dabbs is a freelance technology tart, juggling tech journalism, training and digital publishing. If you are wondering about the significance of this week's choice of music video, you definitely did not watch enough Naruto in the Noughties. More at Autosave is for Wimps and @alidabbs.